It takes a while for "Ping Pong Summer," a coming of age story set in 1985, to settle into a formulaic groove. This stands to reason since writer/director Michael Tully, director of the disorienting anti-bromantic comedy "Septien," has been rewriting and planning to make "Ping Pong Summer" since 1992. The film's relentlessly quirky style of comedy is consequently very self-conscious. Every joke in "Ping Pong Summer" is a variation on a theme: 1985 was the most awkward time to be alive. Everything in "Ping Pong Summer," from fancy-dress buffets to sexually liberated aunts and uncles, establishes the '80s as an era of monumental social distress. Because apparently there's nothing more distressing than a time when The Fat Boys was a thing.

Tully's monomaniacal brand of humor is often tedious since his film's hormonally-charged world is largely established by goony, carbon-dated dialogue like "Oh, dang," and "I'm not frontin' around." But "Ping Pong Summer"'s ensemble cast is great at hitting the same notes over and over again. And, while this isn't an especially high bar to clear, Tully does nail the conventions of the teen comedies he emulates. So while "Ping Pong Summer" does aggressively pander to viewers' nostalgia (dig that Nike track suit, and Run-D.M.C. cassette tape!), it's also warmer and funnier than its worst jokes.

Radford Miracle (Marcello Conte) is not just any lonely 13 years-old doofus. Being a product of his environment, Rad is very social inept. For example, any child of the '90s or '00s could witlessly hard-boil an egg in a microwave, but Rad does it while beatboxing.

During his family's annual summer vacation to Ocean City, Maryland, Rad's activities include being picked on by disaffected goth sister Michelle (Helena May Seabrook), and playing ping pong with new Jheri-curled friend Teddy Fryy (Myles Massey in his hysterical debut role). Rad also likes popular girl Stacy Summers (Emmi Shockley), and therefore stumbles into a romance-and-table-tennis rivalry with W.A.S.P. bully Lyle Ace (Joseph McCaughtry). Also, because the '80s really were a different time, Rad has a friendly reclusive neighbor named Randi Jammer (Susan Sarandon). So, to win the girl and have the best summer ever, Rad must do the worm, and beat the rich kid in a high-stakes game of ping pong.

Since Rad's story is a stock plot, it's only as distinct as his friends and family are memorably goofy. The film's cast do much of the film's heavy-lifting since Tully tends to circle around the same jokes over and over. Thankfully, all of the film's child actors are exceptional, particularly supporting characters like Massey and Andy Riddle, the latter of whom plays Dale, Lyle's fawning lackey. Schticky exclamations like "He's ginumongous" are only so cute. But these kids make you see the best in the film, and nail over-the-top lines like "My dad smoked a cigar while busting a windmill, and that sealed the deal!"

At first glance, "Ping Pong Summer" seems conventional. It's easy to miss the surreal gags, and inspired deadpan line readings that distinguish Tully's film from other recent teen films that "aren't really about Gen-X getting old" (spoiler alert: they totally are). Keep an eye peeled for the sour look Sarandon gives Massey when his character suggests that Randi nickname herself "The Rammer." And savor the over-achieving, suggestive wink Massey gives Conte after Stacy kisses Rad on the cheek. These little moments are the film's gut-busting highlights.

The rise and fall of Rad Miracle, a teenager so gawky that his mom confuses his bathroom beatboxing for cries of masturbatory ecstasy, is necessarily basic. His summer vacation is a sacred oasis of warped priorities, one whose sheer weirdness only becomes clear in hindsight. That revelation is almost tender enough to makes preceding jokes about Funk Punch, Icees, and bad tan lines seem meaningful. But only almost. 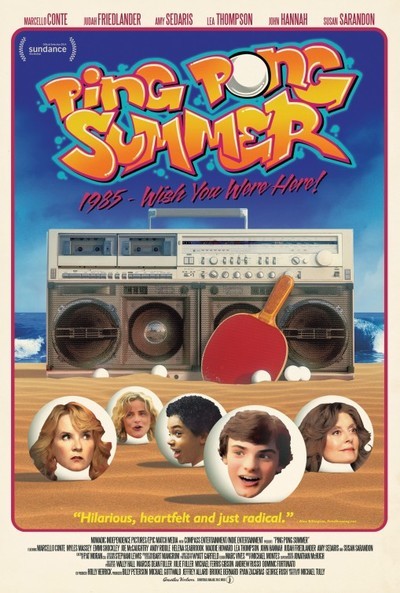