What a beguiling, confounding film "Pig" is. From start to finish, it never moves as you might expect it to. I watched it with a friend who checked out halfway through because it wasn't the movie she was hoping it would be—basically “John Wick,” but with a pig, wherein a long-haired forest hermit named Rob (Nicolas Cage) gets bloody revenge against the criminals who kidnapped his truffle-hunting best friend. There are aspects of it that cannot be said to "work" in any conventional filmmaking sense, but it's hard to imagine that the writer/director, Michael Sarnoski, and its star and co-producer, Nicolas Cage, lost a minute of sleep over anything like that, and its commitment to its own oddball vision is what makes it linger in the mind. For these reasons and more, "Pig" is on a short list of movies I loved that I wish I hadn't been assigned to write about, because I so enjoyed not having any idea what I was in for. No matter how circumspect I try to be in this review, I'm certain to tell you something you'd rather have stumbled into on your journey. (There endeth the spoiler warning.)

The film begins with the hero, Cage's quiet and introverted woodsman Rob, in a cabin with his pig, who is referred to only as Pig. We see them hunting for truffles together, and we watch Rob doting on Pig and cooking up mushrooms in a pan. Pig appears to have a knack for finding exquisite fungi. A younger man named Amir (Alex Wolff) shows up to buy a haul of truffles. We're given to understand that Amir is Rob's main source of income, but that he doesn't need much because he's committed to living off the grid, communing with nature and nursing a motherlode of grief over a woman. We don't know how he lost her, only that he has audio recordings of her that he can't bring himself to play.

And then Pig is kidnapped in the middle of the night, pulled out of the house squealing. Rob is anguished. He wants to go to the nearest big city, Portland, because he's pretty sure that's where she is and he has a vague idea of who might've taken her.

But if you're expecting a rampage, you'd better find another movie. There's a little bit of violence in this film. It's unglamorous and brutal, and thus not easy to watch. But even though Cage's shaggy man-mountain look evokes his star turn in 1997's "Con Air," this is not a revenge picture, or even much of an "action movie" per se—unless you count scenes where Rob, a soft-spoken but keenly observant man, verbally batters other people by saying things that strike them in a deep place. He's not being abusive, just telling the truth as he sees it. But the impact is devastating.

We don't know anything about Rob when the movie begins, nor do we know what kind of world "Pig" is set in. Is it a realistic universe like "Leave No Trace" or something stylized, like in the Wick films? More the former than the latter, although there are somewhat unreal or expressionistic elements.

The big one is the underground network of chefs, sous-chefs, restaurant owners, and food and equipment suppliers operating in and around Portland. This secret society appears to have a code, a history, and secrets. Rob was once a legendary part of it, until he dropped out for reasons that are not entirely cleared up by the movie's end. Rob's photographic memory comes in handy while trying to find Pig; in one scene, he identifies a maitre'd (David Knell) as somebody he worked with for exactly two months many long years ago. He reminds him of the fantasy restaurant he once described to Rob, and asks him whether he ever tried to make it happen.

It's easy to see why Cage wanted to be in this movie. Rob is a great character, a philosopher-monk identified by Amir as a practicing Buddhist, but also a Christ figure, a clown, and a regular guy who, catastrophic losses notwithstanding, is too full of himself to connect and heal. He's full of mystery and tenderness, with hints of repressed despair and rage. He doesn't talk much at first, but grows more verbose as the story unfolds, probably as a result of Rob reentering society and being forced to use communication skills he'd been keeping in storage. The script and direction regard nature with the eyes of people who are comfortable in it. When the film moves to the city, the urban landscapes are as oppressive as the forest was comforting.

Cage seems at home smell-testing mushrooms and searing them in a pan, enduring a savage beating, and philosophizing with various supporting characters, and bonding with Amir, the film's second lead. The film's treatment of Cage is reminiscent of the way Bill Murray was used by Wes Anderson in "Rushmore." It's a young man's empathetic fantasy of middle age.

Pairing Rob and Amir throughout the movie rather than staying with Rob the whole time turns out to be the film's masterstroke. As written by Sarnoski, and as played by Wolff, one of the most original young leading men in movies, Amir is as compelling a character as Rob, even though he lacks the older man's ruined grandeur. He's a self-aware mediocrity who would be less depressed if he were dumber and couldn't see his own shortcomings so clearly. Amir thinks he is owed more than he has but isn't sure why he feels that way and is not inclined to investigate or question that feeling. His truffle resale business in Portland is part of a strategy of wealth-chasing and self-improvement. His habit of obsessively listening to classical music and music education tapes in his car confirms that this is a person who feels that he has no class and is trying to acquire some via shortcuts.

The young Jeff Goldblum and Richard Dreyfuss used to excel at playing characters like Amir. Wolff is in their weight class. There are several stunned reaction shots of Wolff in this film that are as entrancing as whatever Cage was doing to trigger that look, because Wolff is such a good listener that somehow you can feel him absorbing what's happening in a scene even when the camera isn't on him.

When the movie puts the two characters together in Amir's car, or on a street where we can appreciate the actors' extreme height difference, they become a classic comedy team: Rob the grizzled old prospector and Amir the urban neurotic, looking for a pig in the city. Even though it was shot in 2019, the sensibility of "Pig" is that of a mid-1970s picaresque character study about smart, sad guys living on the fringes—the kind of film that would have featured lens flares and zooms and slow-motion montages of people frolicking, and perhaps a harmonica-centric score by Henry Mancini.

Accordingly, "Pig" freely commits to a storytelling aesthetic that will be described as slow, digressive, unfocused, and probably a lot other pejoratives by anyone who is not able or inclined to get on its admittedly peculiar wavelength. While conceding that it won't be everyone's, or even most people's, cup of tea, I prefer to accept everything it does with an open mind and heart, because it's so clearly an open-minded and open-hearted film. It's attentive to regret and failure in ways that American films tend to avoid for fear of bumming viewers out and making them warn other people not to watch the movie. And it seems to understand the way people mythologize others and themselves, and the reasons it happens. The world of "Pig" is as desolate and cruel as ours, but smaller. Everybody in it seems to know everybody else. And still nobody cares. Except for the hero, who loves his pig. 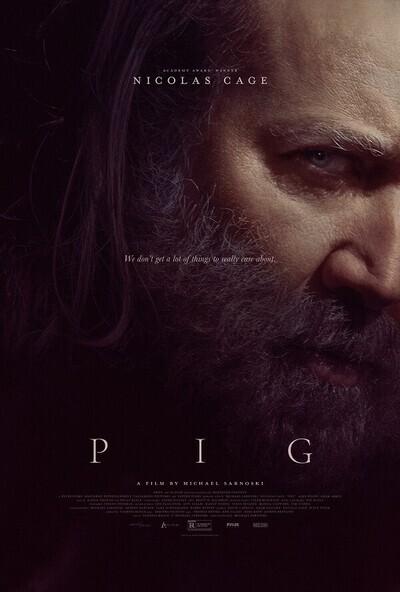