Kornél Mundruczó’s “Pieces of a Woman” actually begins with a man. Sean (Shia LaBeouf) is working on building a bridge in Boston, but soon leaves the job site to be at home with his partner, Martha (Vanessa Kirby). Their first baby is due any minute, but when the time comes, things don’t go according to plan. Most parents, obstetricians, and midwives will tell you, that’s not uncommon. The baby comes when it wants, even if the midwife isn’t around for their home birth. But over a few short minutes in the movie, Martha’s screams of birthing pain give way to a baby’s first cries. The parents are ecstatic over their new bundle of joy. The replacement midwife (Molly Parker), a stand-in for the couple’s first choice, lets out a sigh of relief. But the happy moment is short lived. Something goes terribly wrong, and everyone holds their breath as paramedics rush in.

Kata Wéber, who wrote the film, based its central tragedy on the experience of losing her child with Mundruczó, her creative partner for “White God” and “Jupiter’s Moon.” For their third collaboration, the writer-director team dug deep, unearthing the pain caused by awkward stares and the isolation that comes with losing a baby. “Pieces of a Woman” is at its strongest when exploring those cavernous silences and such unimaginable grief. It’s less interesting when the perspective shifts back to Sean’s side of the story. The script has him go down a checklist of self-destructive bad behavior, which adds little to the heart of the story. Looming in the background of this deeply personal tale is a sensationalized trial over the midwife’s negligence, which like Sean’s antics, distract from the already powerful drama.

On the other hand, Kirby has to navigate her character through every parent’s waking nightmare, which she does impressively. As Martha, Kirby shifts from catatonic to chaotic, becoming just as destructive as her partner without feeling like a cliché. She’s angry at Sean, her co-workers, her family—especially her mom, Elizabeth (Ellen Burstyn), who talks about her loss as if it were a personal failure and chides Martha for not actively pressing charges against the midwife. It’s a tension that leads to the best scene of the movie, a showdown between mother and daughter, both grieving and each with entirely different ideas on how to move forward. It’s a moment so electric, it makes the martial drama feel like window dressing.

LaBeouf is doing his damndest Stanley Kowalski. His character is a brutish, working class raw nerve who’s reached his limit on being undermined by his partner and her family’s money. He’s stubborn, commandeering and resentful in a way that makes you wonder how a soft-spoken woman came to fall in love with him in the first place.

In some instances, it might be easy to ignore allegations of abusive behavior, but it’s simply not possible in “Piece of a Woman,” where LaBeouf’s character acts aggressively towards Kirby’s. FKA Twigs’ lawsuit against LaBeouf alleged the actor had sexually assaulted her, knowingly passed on an STD, and caused great emotional distress. In one of the most uncomfortable scenes in “Pieces of a Woman,” LaBeouf’s character Sean initiates sex when Martha doesn’t want it. She doesn’t outwardly object, but her expression and body language look very unreceptive. Finally, when she acquiesces, he gets up and storms off, no longer in the mood. All his pent-up anger at her and her family then leads to him lobbing a yoga ball at her face. She defiantly deflates the yoga ball, something she likely used to bring herself some sense of calm and wellness, with a cigarette. She too can be self-destructive and angry, but she doesn’t lash out with violence like he does. Instead, she takes away the weapon he used to hit her with, even if it might have been hers to begin with. She won’t let him hurt her again.

Thankfully, it’s Kirby’s performance that makes “Pieces of a Woman” memorable. Despite a cumbersome bridge building analogy and a story set in Boston that does not look like Boston, Martha’s emotional journey is more impressive than the story gives it credit. There could have been more scenes between Martha and Elizabeth or her family, which includes a sister (Iliza Shlesinger), brother-in-law (Benny Safdie, in some of the movie’s few comical moments) and a cousin who’s a lawyer (Sarah Snook). Through Martha and Elizabeth’s sometimes contentious relationship, there’s even a brief exploration of generational trauma and how that affects a person’s ability to grieve or how they think grief is supposed to be handled. The latter half of the movie is just as tense as the birthing scene, leaving the audience waiting with bated breath. Although the outcome of the trial won’t change what happened, this time, Martha can do more than watch helplessly. She can take her first steps away from the expectations of her mother, partner, and society, and grieve in her own way. 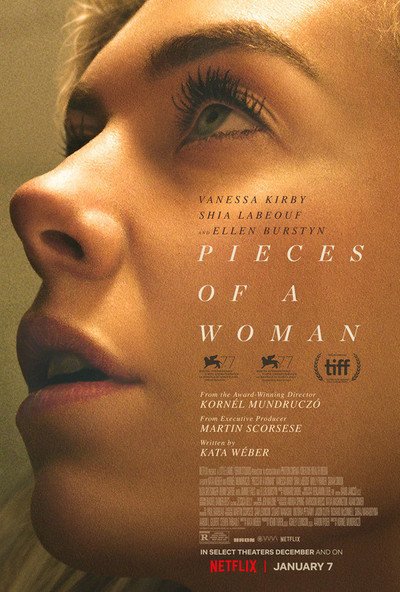