The opening titles of “Phenomenon” plant a sly idea that the film does nothing to discourage. We see the star-filled sky, and then the letters of the title settle into place with a subtle whoosh. We pick up “Close Encounters” vibes. Not long after, the film's hero walks out under the stars and is startled to see some kind of a weird white light, which zaps him from the heavens. Has he been touched by a UFO? Maybe. The hero is George Malley (John Travolta), a genial garage mechanic, of average intelligence, well liked in his small California town.

After the visitation from the sky, he begins to get smarter. A lot smarter. He starts taking out six books a day from the local library and figuring out things that had previously been beyond him. He's able to learn a foreign language by riffling through a textbook. This is not the George people know. It is the lament of “Phenomenon” that people do not like the unexpected. They want George to continue to be George, no more, no less, so that he continues to fill the same predictable place in their lives. A brilliant new George, winning at chess, predicting earthquakes, picking up strange vibes, is disturbing. “What is going on, George?” asks Lace (Kyra Sedgwick), the pretty divorced woman George would like to be dating. “I need the simple truth!” She has the thankless role of the woman who demands an explanation that the audience knows is impossible to give: “I just asked you for one thing, George, and you couldn't handle it!” It's about the only thing George can't handle; matters of the heart are just as difficult to solve when you're a genius. The only people in town who can easily accept the new George are Doc (Robert Duvall), who considers him like a son, and Nate (Forest Whitaker), his best friend. With them, George is able to share his enthusiasm for the daily cascade of discoveries. This is a good role for Travolta, who has an underlying sweetness and enthusiasm that is well used here. There's not an ounce of circumspection in his character, and when he gets his unexpected gift, he wants to share it. He contacts scientists and universities, and is startled when the FBI turns up in its obligatory role as paranoid sniffer after suspicious behavior (his interview with a federal agent is a small gem). We know the general outlines of the story before, having been through somewhat similar territory with Cliff Robertson's “Charly” (1968).

Although Charly was retarded and George is average, they are both transformed through their blooming intelligence, and then in the third act, something happens that is not foreseen. I will not reveal what that is, except to say that the film will leave you with questions that it does not quite resolve. Maybe that’s the best thing. We know what happened to George, but not precisely why, and who's to say if a UFO was involved or not? The heart of the story is in George's character and his relationship with Lace (who, apart from her obligatory demands for an explanation, is a good and understanding woman). The film is essentially a good-hearted story about the rhythms of small-town life and the meaning of friendship, and if George's gift is a mystery even to him, at least it inspires a lot of conversation. Like many small towns (or movies set in small towns), this one has a bar where the locals provide a chorus for all of the action, and after George begins spinning paperclips in mid-air and breaking mirrors, they have the material for many a long beery discussion. “Phenomenon” could have been more, I think. It might have pushed the edges of its story a little harder, and found out things that would be more challenging, or threatening, to George and the world he lives in. But that's not what it's about. It's about change, acceptance and love, and it rounds those three bases very nicely, even if it never quite gets to home. 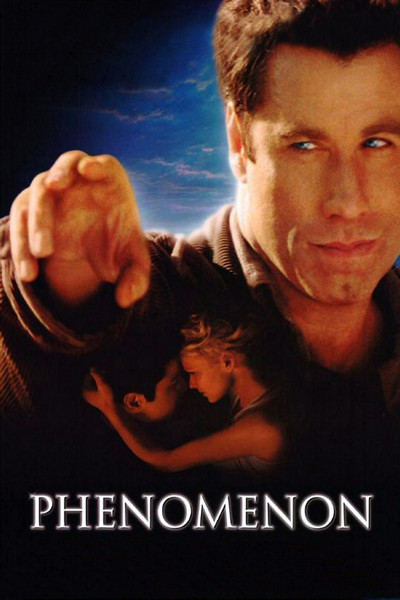