Leo, a very sick little boy, is able to float outside of his own body at night, swooping through the skies over the glamorous lit-up city of Manhattan. At a certain point, his phantom self starts to lose its "juice," and needs to go back into the body, still lying in his sick bed. But at least he has those escapes, that feeling of freedom and perspective. This is the starting premise of Jean-Loup Felicioli and Alain Gagnol's lovely animated feature, "Phantom Boy," the follow-up to their Academy-Award nominated "A Cat in Paris." Their animation style is melodramatic and often gorgeous, with deep colors and high contrasts. And here, in a story about a "phantom boy" who teams up with an injured policeman to solve a case, the style perfectly expresses the magic, grit and dream-like quality of the narrative. "Phantom Boy" adds layer upon layer of plot as well as a huge cast of characters, and there's a little bit too much going on at any given moment. The film can be smothered by the obligations of its plot, but it's still beautiful and original, extremely funny, and sometimes very moving.

Opening with Saul Bass-inspired credits, and an eerie dream-like score by Serge Besset, "Phantom Boy" starts small: Leo has been admitted into the hospital with an unnamed extremely serious illness. While there, he meets Alex, a scruffy injured cop, in the midst of trying to regain the trust of his exasperated superior after a crime scene mishap. Leo has always wanted to be a policeman and grills Alex on what it's like, and eventually he confesses that he can leave his body at night and float above the city. Turns out, a phantom boy can be very useful when going up against the most dangerous villain Manhattan has ever seen, a villain known as The Man With the Broken Face. Alex tries to solve the case from his wheelchair in the hospital, with the help of Mary Delaney, a spunky journalist on the lookout for a scoop, and Leo, the phantom who can float through walls and ceilings and report back what he sees.

The Man With the Broken Face stalks Manhattan from a docked ship on one of the piers, issuing grandiose threats via video feeds that project onto Times Square billboards. His patchwork-quilt-colored face looks like it was put together by Picasso, mouth over on one side, eyes that are different shapes. The Man With the Broken Face holds New York City hostage ("New York belongs to me!" he bellows in one of his video addresses), and threatens to unleash a computer virus that will plunge the city back to the Stone Age. Or something like that. Surrounding The Man With the Broken Face is a den of hilarious dim-bulb goons who couldn't steal a stick of gum without calling attention to themselves.

The animation is gorgeous, owing much to film noir, graphic novels, the work of Richard Sala, and Jacques Tati's abstract cityscapes. The characters cast shadows so stark that they are almost entirely separated from their bodies, like second selves, detached and watchful, as though everyone on the planet also has a phantom self, like Leo does, straining to roam free. There are sudden flashes of sweeping visual poetry: Leo and his sister both sitting in a parent's lap, a still and sad mirror-image family portrait; Leo's pale white phantom circling around the glittering Chrysler Building with a purple sky behind pierced with lightning; Leo perched on the edge of the Statue of Liberty's torch, surveying the harbor below, or soaring over a Central Park ablaze with autumn leaves.

The script is often funny with screwball bits built in. There's a great running gag where The Man with the Broken Face keeps wanting to tell people how his face got so messed up. He has a whole monologue prepared. But every time he launches into it, he's interrupted. Alex and Mary have one of those "they snipe at each other so much they must really love one another" relationships, and it adds a nice spark to their interactions. The voice-work, done, in part, by Audrey Tautou, Edouard Baer and Jean-Pierre Marielle, is human, sincere, honest.

"Phantom Boy" includes killers and shoot-outs, and some extremely tense sequences near the end, as everyone races against the clock to solve the case, save Leo, save Manhattan. The overall tone is breezy and funny, and Leo's illness is not "milked" in a manipulative way for the audience. With action punctuated by snappy dialogue, pratfalls, visual jokes, the film's humor co-exists easily with the cops-and-robbers format, which co-exists easily with the developing relationships between Leo and Alex and Alex and Mary. It's the kind of genre-blend that "Old Hollywood" used to pull off in its sleep, and has now become practically a lost art. How wonderful to see it again. 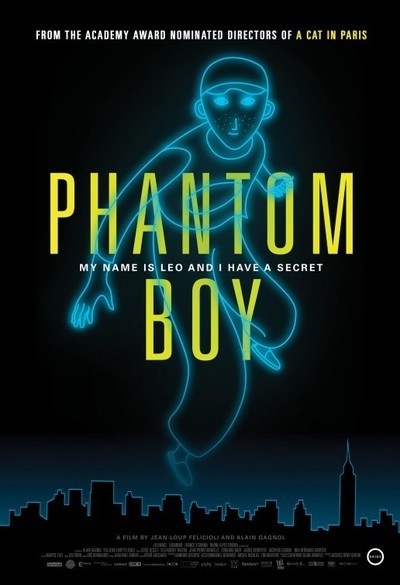