"Persecuted" is a heavy-handed and didactic drama which also manages to be totally mushy in terms of the message it’s trying to convey.

It’s the strangest thing. Writer-director Daniel Lusko’s film definitely has a pro-Christian perspective and is aimed at conservative viewers. The ubiquitous presence of Fox News Channel anchor Gretchen Carlson ensures that, and Glenn Beck is among the movie’s behind-the-scenes backers. But the ideology driving the film’s paranoid-thriller engine is a little elusive.

James Remar stars as popular evangelist John Luther. A formerly abusive alcoholic and drug addict, Luther has turned his life around with the help of the Lord and built a powerful ministry with a massive following. But when Luther refuses to throw his support behind a piece of legislation known as the Faith and Fairness Act—“I cannot water down the gospel to advance anybody’s political agenda,” he solemnly tells the corrupt Senate Majority Leader (Bruce Davison)—he’s framed for the rape and murder of a teenage girl.

This vague bill promises sweeping religious reform but also seems to validate the same protections we already enjoy in the Bill of Rights. Still, several politicians’ futures depend on its passage, all the way up to the laughably menacing, Clintonian president himself. All of these people use their access and their clout to make Luther’s life as miserable as possible. Because clearly, they have nothing better to do.

A husband and father of a young girl himself, Luther must turn his back on everyone and everything he knows and go on the run to avoid the various forces that are targeting him. After a highly symbolic cleansing—he showers while artfully blurry images from that fateful night flash through his mind—he seeks solace and protection from his father, a Catholic priest played by Fred Dalton Thompson.

While Remar does his best to resist the film’s melodramatic tendencies—to no avail, ultimately—Thompson is the only one here who actually grounds the proceedings during his few moments on screen. Also among the supporting cast is a barely-there Dean Stockwell as one of the higher-ups in Luther’s ministry, who may or may not be a bad guy. It’s hard to tell.

It’s also hard to tell whether Luther is the moderate or the extremist in this equation. He opposes the bill—which ensures equality of religion, and is therefore evil—because he feels it’s anti-Christian, but he also clutches a rosary in one hand and a gun in the other as he scurries about, struggling to survive and clear his name.

Here’s my question, though—if these Washington power brokers want this guy’s support, doesn’t tarnishing his name actually hurt their cause? Or are they sending Secret Service agents out to destroy him for straight-up retribution in all their copious free time? Meanwhile, Luther’s longtime friend and colleague, a creepy, flashy preacher named Ryan (Brad Stine), plays all sides—insinuating himself with Luther’s worried wife, working for the FBI and schmoozing up the dirty senator and his cronies.

Regardless of the details (or lack thereof), “Persecuted” seems most interested in serving as an affirmation of faith. Characters die or nearly die while standing by their beliefs, something that’s telegraphed by the Martin Luther King Jr. quote in the film’s opening title card: "A man who won’t die for something is not fit to live." Lusko often depicts Luther kneeling in prayer or reading his Bible while dramatic music swells, hammering home the fact that we’re watching a moving, spiritual moment.

"Persecuted" stridently argues that Christianity is under attack, but it’s preaching to the choir. 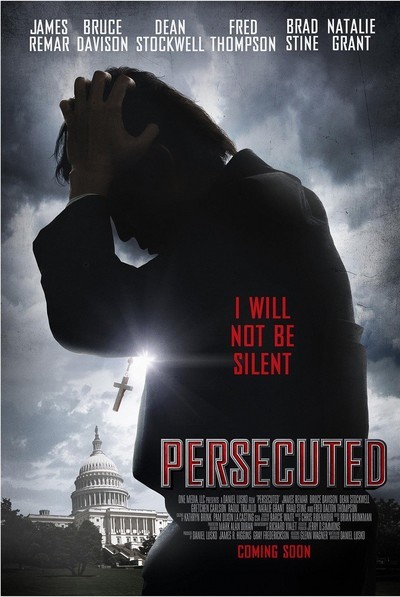