Every generation of girls has its aspirational hairstyle. I grew up on the tail-end of the Farrah Fawcett era, punctuated by Dorothy Hamill-mania and Princess Di-frenzy. My idol when I was 10 was Andrea McArdle, star of the Broadway show "Annie," who had a bob cut with a little curl coming down either side of her face. My hair was too thin to replicate the look, even with the help of a curling iron. I was devastated. In an act of meaningless revenge, I cut off all my hair in an attempt to put the bouncy Dorothy Hamill-Andrea McArdle bob of my dreams firmly in the rear-view mirror. In "Permanent," writer/director Colette Burson (creator of the HBO series "Hung") uses the premise of a Tween's bad haircut to explore—to varying degrees of success—issues of family, class, adolescence.

The year is 1982. Farrah Fawcett's hair still reigns. Young Aurelie (Kira McLean), who has moved with her parents to a Virginia suburb, stares longingly at the bouncing thick locks of the middle-school girls around her, and begs her parents (Patricia Arquette and Rainn Wilson) to let her get a "permanent." Her whole life will be different—especially in a new school where she knows no one—if her hair had more "body"! But Aurelie's parents are openly broke, and the beauty salon trainee who administers Aurelie's perm leaves her looking like Little Orphan Annie with a finger in an electrical socket. The bullying she gets at school, already bad, ratchets up a notch. She gets in fights. All she needs to do is somehow come up with 60 bucks to get her hair straightened. She schemes and plans for a way to get that money.

"Permanent" is filled with ineffectual narcissistic adults and children as cruel as Black Hats in a classic Western. Everyone mispronounces Aurelie's name (a teacher calls her "Areola" at one point). Jim, Aurelie's dad, was a steward on Air Force One, and proudly displays all of the signed photographs from U.S. presidents. He's going back to school, but stymied by his fear of swimming (long story). One look at the toupee glued onto his head makes it obvious where his daughter gets her hair insecurities. Jeanne, Aurelie's mother, is overworked and sexually frustrated ("Jim!" she pleads at one point, "Sex is free!"). Her main goal in life is to touch a dolphin and she's so furious when Jim doesn't show the appropriate interest that she sleeps on a blanket in the backyard. (Arquette and Wilson make a wonderful comedic team.) They are a family of misfit toys. Each person is afraid of everything, of change, of not belonging, of rejection. The trio freezes up when an unexpected knock comes on the front door. "What is wrong with us that we're all afraid to open the door?" moans Jeanne from her spot on the couch. The group family scenes are the best in the film.

Aurelie befriends the straight-talking Lydia (Nena Daniels), who has been placed in remedial classes for no reason other than she is a black girl in a predominantly white school. A condescending teacher, speaking slowly, asks her to name a word starting with the sound "sh." You can probably imagine Lydia's irritated reply. Lydia and Aurelie team up—most memorably during a brutal scooter-hockey game in gym class, filmed like it's the World Cup—to try to get back at the mean girls who torment their lives. Young Daniels, a Richmond native, has an Oscar-worthy moment late in the film during a school-wide poetry reading. The connections made in Burson's script between Aurelie's bad perm and Lydia's braided hair is not well-considered, especially when Lydia decides to unbraid her hair in a moment of shared freedom. "Permanent" is not substantial enough a story to be able to support a commentary on African-American girls and their hair.

The film has a good comedic rhythm, and there's a rambunctious bickering energy in every scene. It's often quite funny. But "Permanent" feels like a short film stretched to feature length. It never quite rises above the level of its premise. 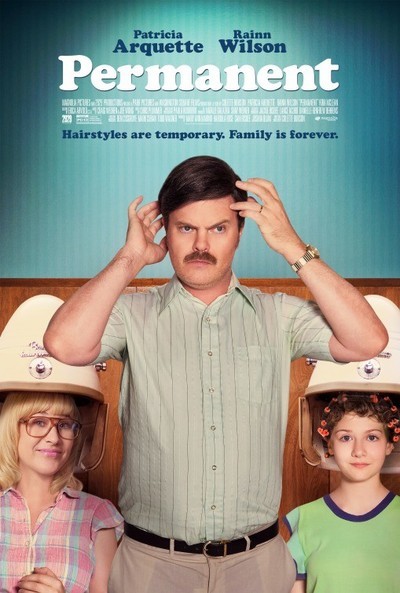