“Pennies from Heaven” is dazzling and disappointing in equal measure. It's a musical with an idea, and ideas usually have been deadly to the musical, that most gloriously heedless of movie genres. The idea this time is that there was a great contrast between the grim reality of the Depression era, and the mindless song-and-dance of the era's favorite escapist entertainment, the musical. Well, so there was, and viva la difference.

“Pennies from Heaven” illustrates its insight by setting up a brutal contrast between its dramatic scenes and its musical numbers. The story in this film is relentlessly downbeat, cruel, and occasionally twisted: A miserable marriage leads to a cheerless love affair, both based on the sexual humiliation of women. Then, just as we are primed to hurl ourselves out of the window, the characters undergo a transmogrification into inhabitants of an upbeat 1930s musical. The voices of Bing Crosby, Connee Boswell, Fred Astaire, and other Depression recording artists issue from their mouths, and they dance their way through the most dazzling production numbers since Busby Berkeley.

The movie keeps cutting back and forth between its mean-spirited narrative and the empty-headed perfection of its musical numbers until we're as dispirited as the characters. We get it: Nothing is real except pain, and anyone who dares to sing "Let's Face the Music and Dance" is sooner or later going to have to face the music. It is the structure of “Pennies from Heaven” that works most fatally against the film. A few key scenes contrasting grim reality and movie escapism would have made the point, but two hours of contrast simply destroy our ability to get into the movie and enjoy it. The movie constantly shatters its own reality, which is, admittedly, a daring thing for a $25 million musical to do, but in this case is not a very good idea.

Original ads placed the emphasis on the movie's musical numbers and its stars, especially sheet music salesman Steve Martin and his schoolteacher mistress, Bernadette Peters (there was less emphasis on Jessica Harper, who plays Martin's desperately hapless wife). Hollywood is always pragmatic in these matters: If the filmmakers haven't made the film the studio had in mind, the studio simply advertises the film they wish had been made. That led to some thoroughly puzzled audiences, as Martin fans lined up for a wild and crazy musical and discovered they were in a musical that wanted to subvert musicals. Some of the scenes in “Pennies from Heaven” are very hard to take, especially one in which Harper pathetically tries to cater to Martin's favorite fetish, which is lipstick on the nipples; this is the most embarrassing and gratuitously cruel scene I've seen in a long time.

On the other hand, “Pennies” also contains musical scenes that are wonderfully entertaining, even if the movie has a way of ending them with emotional crash landings. The choreography has been referred to as a Busby Berkeley parody, but it's not parody, it's homage, and never have I seen such well-drilled troupes of chorus girls, song-and-dance men, and even well-scrubbed little toddlers lined up at dozens of baby grand pianos.

The production values in this movie are superb, and it's great to look at, not only during the musical interludes but even in the dramatic moments. Many of the compositions are borrowed from famous paintings or photographs of the time.

The problem is, “Pennies from Heaven” is all flash and style and no heart. That's the problem with the Steve Martin performance, too: He provides a technically excellent performance that does not seem to be inhabited by a person. Bernadette Peters has a winning way with the schoolteacher, all curls and sweetness and shattered hopes, but the emotional reality of the other characters is consistently undermined by the movie's lame-brained determination to interrupt each happy moment with a grim one, and vice versa, until we're emotionally shellshocked. Just imagine if the creativity, energy, work, talent, and money that went into “Pennies from Heaven” had been devoted instead to a cheerful film on the same topic. Boy, would we need it now. 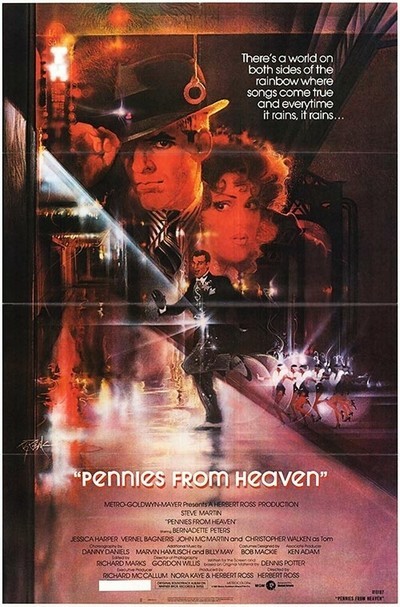