It sounds painfully mawkish if not downright implausible on the page: a woman, paralyzed from the chest down in a freak accident, finds hope and determination in caring for an injured bird. The parallels would be too forced; the symbolism, too obvious.

But despite its feel-good formula, “Penguin Bloom” still manages to inspire and impress, thanks to some striking visuals and strong performances, namely from star Naomi Watts. And though the premise of director Glendyn Ivin’s film may seem impossibly cutesy, this story actually happened, as detailed in the book of the same name by Cameron Bloom and Bradley Trevor Greive.

While the script from Harry Cripps and Shaun Grant too often features on-the-nose dialogue—with characters literally spelling out the film’s themes—and it all wraps up in safe and predictable fashion, “Penguin Bloom” offers just enough moments of authentic emotion and poignancy to make it compelling.

Watts stars as Sam Bloom, an avid outdoorswoman and surfer living a peaceful existence in an airy, modern house overlooking the beach in New South Wales, Australia. She and her photographer husband, Cameron (Andrew Lincoln), enjoy an adventurous life of sports and travel with their three rambunctious boys: tween Noah (Griffin Murray-Johnston), Reuben (Felix Cameron) and Oli (Abe Clifford-Barr). Or at least they did, before Sam’s accident: “Everything was pretty much perfect. But then last year happened,” says Noah, the film’s narrator.

Working with cinematographer Sam Chiplin, Ivin sets the scene of the family’s fateful Thailand holiday with imagery that’s both vivid and impressionistic: pool plunges, marketplace strolls, nighttime fireworks. But as they climb the steps to a rooftop to enjoy a scenic view, Sam leans against a wooden railing that gives way, sending her plummeting to the ground below. We see her fall several times over the course of the film, providing different perspectives as we delve deeper into the family’s dynamic.

Having been so independent and active for so long, Sam is understandably depressed, spending long days in bed with the curtains drawn. She feels detached from the mundane sounds of her younger kids playing in the living room, and when she attempts basic parenting tasks like fixing their lunches for school, she drops the knife and bread on the kitchen floor, magnifying her sense of helplessness. Small details like these make her daily struggle feel specific and real, and Watts finds subtlety in moments of frustration that could have been melodramatic. Her mom (a perfectly cast but underused Jacki Weaver) visits to cheer her up and help out around the house, but she’s more inclined to nag than sympathize.

Instead, Sam finds purpose in an unexpected place: a magpie chick that’s fallen from her nest, which the boys discovered at the beach and brought home. Noah names her Penguin for her black-and-white coloring, and while she provides a welcome distraction at first, she’s also a destructive little thing. Adorable but annoying, Penguin cheeps and chirps all day in her basket. She hops out and bops around the house, causing mischief wherever she goes: pecking at a sock monkey, knocking over vases, nicking a teabag from mum’s mug. And of course, Penguin leaves poop wherever she goes. It’s all way too wacky, but the multiple birds credited as playing Penguin clearly had thorough training.

While Sam initially isn’t thrilled by this the presence of this new pet, she eventually recognizes in Penguin a kindred spirit: “She’s a wild bird, which means she can’t stay here forever,” she says, clearly commenting on her own state, as well. Later, she asks rhetorically: “She doesn’t want to be stuck inside, does she?” Noah also relates to her, wondering “Do you miss your mum?” since he feels such a distance from his own. (Newcomer Murray-Johnston has an unusually wise and direct screen presence for a child actor, which is appealing.) Again, there’s a lot of hand-holding going on here, when simply watching Sam care for the bird and seeing how that elevates her mood should speak for itself. It makes her feel like a mother again, when so much of the parenting duty has fallen to Cameron out of sheer necessity.

So when Sam senses that Penguin wants to go outside, she ventures onto the patio, too, basking in the sunshine in her wheelchair. Conversely, when something is wrong with Sam, Penguin is the first to notice it and alert the rest of the family. The bird actually looks at her as if she understands her pain; either you’ll go with this bit of anthropomorphism, or you won’t. A lot of it depends on how transfixing you find the story at this point. Watts’ performance, however, is so visceral and nuanced that she makes you want to believe all this magpie magic is possible.

But eventually, Sam agrees to Cameron’s suggestion that she take kayaking lessons, which gives us the opportunity to enjoy the delightful Rachel House as her no-nonsense instructor. Penguin might just regain its ability to fly around the same time. While the journey there is never in doubt, “Penguin Bloom” still finds occasional opportunities to soar. 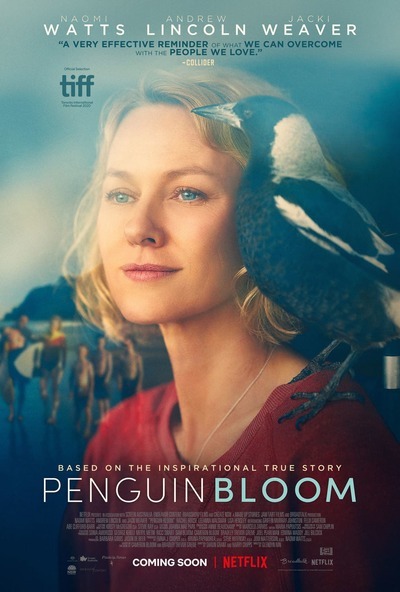