Something is not right with Pearl (Mia Goth), and she’ll never understand why. She’s too set in her ways, like her need to perform on haystacks while dancing with a pitchfork, or murdering animals when no one is watching. She wants to get out of her isolated farm in 1918 Texas, and experience the love that comes from performing, in being seen as an entertainer but not your truest self. It’s not likely her future star profiles would ever mention that she once impaled a duck with a pitchfork and then fed it to her best friend, an alligator (as we see when her name splashed across the screen in the opening credits).

Ti West’s “Pearl” is about how frightening actors can be as they feed that corrosive need to be seen at all costs. So it’s fitting that this movie’s most brilliant moment, its final shot (not a spoiler, as we know she makes it to 1979 in West's “X”), is from Goth using her face to disturbing ends. It’s a wide, forced smile; her teeth signal happiness, while her sporadically twitching facial muscles and welling tears say something much scarier, all while frozen in that desperation. West makes us stare at it during the closing credits. It’s all wildly, wonderfully discomforting, and one wishes this character study strove for that effect more often while telling a story that’s not as nuanced as its final, silent call for help.

But for how obvious the plotting and dialogue can be from co-writers West and Goth in painting a portrait of a monster, it’s fun to interpret Pearl’s proclamations throughout her film as actor/serial killer double-speak: “The whole world is going to know my name,” “I don't like reality,” “All I want is to be loved.” Goth makes these revelations count in primal showcases, expressed with a breathy, heavily accented voice that’s meant to make her sound kind of naive and very much innocent, a carbon copy of the countless Pearls out there. A long-running close-up of Goth later on takes us on a wild ride of her anxieties about not being loved, her fears of her true self, unaware that the sudden turn within her is near, especially after someone makes her feel small. Then they suffer for it.

Those who remember this year’s “X” will remember the farm where a handful of adult film folk died, and Goth’s elderly version of Pearl, who was often naked and rebuffed and took it all very personally for a course of events a la “The Texas Chain Saw Massacre.” The few kills in “Pearl” are more calculated, and come as climaxes to scenes of anger, rejection, and her own frustrations. West makes those moments count, creating dread out of a camera’s movement (slowly spinning at one point, waiting for Pearl to pop into frame), while his editing then has its own brutality. Usually taking place in daylight and within Pearl’s psychosis, they’re meant to be played as dark comedy. That very mix of tone doesn’t hit as poignantly as it wants to, but the kills are effectively bracing.

The house is treated with similar shots as in “X,” but the cinematography by Eliot Rockett presents it in glowing Technicolor, a storybook world of potential—bright green grass, a blood-red farmhouse, blue sky overalls on Pearl as she dreams of getting away. Things are less luminous inside the home, where Pearl’s life of isolation and grave unhappiness is no anomaly: her father (Matthew Sunderland) is literally in a wheelchair, sick and wordless, and always needs tending to. And while “Pearl” is a monster movie, Goth’s character has a villain of her own, her mother Ruth, portrayed with haunting disgust this side of “Mommie Dearest” by an incredible Tandi Wright.

Repression is evil’s trick in “X” and now “Pearl”; it makes connection, pleasure, and so much that is fruitful all the more out of reach. It gets people killed. Ruth helps make sense of the horror in this world, in a staggering centerpiece scene that lays it all out on a dinner table: she rips apart Pearl’s hopes of ever leaving, projects comments of failure onto her, and screams about her own immense dissatisfaction with life that she has accepted. Her words are visceral, and they seem to control the thunderstorms that boom from the outside. It's an apt turning point for Pearl, and an excellent display for both Goth and Wright.

Pearl finds an escape from all of this in the movies—even just the thought of being in one. When her father needs more medicine, she goes to town and gets to actually watch one, inspiring her dreams of being the smiling dancing woman in the frame. She also meets a dashing projectionist (David Corenswet), who makes her feel like she could be a movie star, although she later finds out what kind of movies he means, and what he wants from her. Pearl remains as naive as she is needy as she tells him in wistful terms about wanting to be a star. It's here that we simply have to trust Goth and West’s dedication to this character and believe that they're rooting for her in the end.

West's film takes place in a world that is sick, as the Spanish Flu has reached the states, causing people to wear masks and be isolated. That’s a stronger period element than the movie’s presentation; there’s a nagging effect that in spite of the production design—those cars, dresses, and even a full-out dance sequence—that the movie is so self-amused it’s practically baiting people who go to old movies in theaters to laugh at the niceties and mannerisms of earlier eras. It can be accomplished in other facets, like the gorgeous wall-to-wall score by Tyler Bates and Tim Williams that kicks off with a sumptuous main theme, but the aesthetic gambit of “Pearl” registers more as being cute than immersive.

There are just too many moments in which the sincerity of “Pearl” is questionable. Yes, it gives Goth a compelling chance to nurture a fascinating character, to show a performer’s heart and needs, for us to clock her emotional reactions like the steps of a slasher. But the execution of “Pearl” is shakier in what it wants us to take from her delusions, her violent outbursts, her yearning for love. “Pearl” gets a little too close to letting you simply laugh at her. We know she wouldn’t like that. 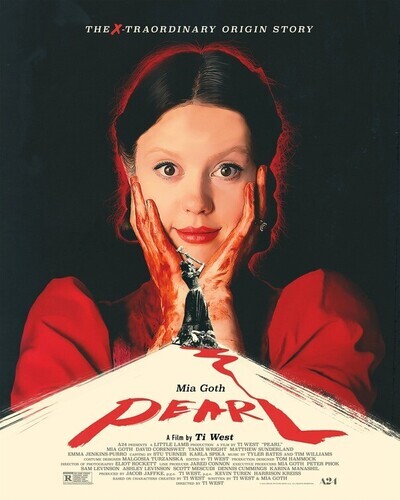 David Corenswet as The Projectionist