The new movie written and directed by Jim Jarmusch is a total fantasy. This in spite of being shot on the streets of the New Jersey city in which it is set, and for which the movie itself and its lead character are named. It’s as much of a fantasy as Jean Cocteau’s “Orpheus,” another great film about a poet that was at least partially set in the “real” contemporary world. It’s maybe not as much of a fantasy as the “Lord of the Rings” trilogy.

The movie’s protagonist, played with spectacular attention to detail and what feels like a genuine sense of affinity by Adam Driver, is named Paterson, and he drives a New Jersey Transit bus around the New Jersey city of Paterson, where he also lives. Paterson, New Jersey was once an industrial center of the United States—a storied manufacturer of silks and textiles—that fell into a kind of ruin by the time this film reviewer moved there, to live, in 1978. It has undergone several not-quite-revivals since that time. Its main fame today is in its being the ostensible subject of an epic modernist American poem by William Carlos Williams, who lived in nearby Rutherford. “[A]nd so to man/to Paterson,” Williams wrote in the Preface to that work, underlining an ambition that was potentially pantheistic.

The Paterson inhabited by Paterson is not a ruin but it is a largely quiet, sometimes haunted-seeming place. Paterson the man (whose first name is not given, or is perhaps nonexistent) is a fellow of routine. For the most part he gets up at the same early hour every morning, summoned by what his wife Laura calls his “silent alarm watch,” a Casio of retro design. Paterson’s marriage is also a little retro (some critics have derided it as retrograde, politically, a claim I find not pertinent). Laura, played by Iranian actress Golshifteh Farahani (who’s in Kiarostami’s “Shirin” and Farhadi’s “About Elly”) is more or less a housewife. She bakes delicious cupcakes, dubious dinner pies, is unfailingly sweet, and decorates the couple’s small house with bold black and white patterns, which also distinguish her cupcakes. She has some whimsical seeming ambitions that Paterson either indulges or helps her with, depending on how you want to look at it. But aside from muse functions, she has little to do with her husband’s daily routine, which, aside from driving a bus, is devoted to poetry. In his neat notebook Paterson writes, in a neat hand, plain-spoken poems celebrating what the Surrealists called “the marvelous in the everyday.” These poems were actually written by Ron Padgett, a still-living poet with roots in the “New York School” which of course was influenced by Allen Ginsberg and his mentor Williams and whose most famous member was Frank O’Hara.

The plain-spoken poems here bear a slight resemblance to the work of James Schuyler, only minus Schuyler’s anxieties and tortured longings—they seem to come from a place of contemplative contentment. Paterson’s nearly rigid approach to life, love and work, seems deliberately designed to produce that state of being. His other muse is, of course, the Paterson Falls, where he sits on his lunch hour and at other times.

His nemesis is an English bulldog named Marvin, who belongs to the couple but is clearly not crazy about Paterson. Every night, though, Paterson walks the growling, grumbling beast, and leashes him outside a bar. There, Paterson has precisely one beer and talks things over with bartender Doc (Barry Shabaka Henley), discussing Doc’s Paterson Wall of Fame (featuring Lou Costello, Floyd and Jimmy Vivino, and others) and contemplating life and love. Paterson gets food for thought on his bus, too; he overhears a teenage girl explaining Italian anarchist Gaetano Bresci to a fellow student, say, or two construction works discussing (in incredibly polite terms) their potential amorous conquests, which they say they’re too tired or preoccupied to follow through on.

This is the third of Jarmusch’s fictional films in which he concocts a fantasy realm in which he, the image-maker and aesthete, could lead a comfortable and productive existence. In 2009’s “The Limits of Control” he posited the imaginative realm as one in which an individual could not just escape political oppression but also effectively obliterate it. In 2013’s “Only Lovers Left Alive” he explored the state of vampirism as a way of building a realm in which one could stay not just forever young but forever young with fantastic taste. Here he constructs an idyll out of orderliness and a circumscribed mode of engagement. Paterson and Laura have no onscreen social life to speak of (the bake sale for which Laura creates dozens of delicious looking black and white cupcakes is not depicted), and no nosy or imposing family members. Paterson has not published his work, and does not even deign to copy it out of his notebook. And yet there’s a sense of interdependent gears at work here. The man, the bus, the passengers, the bar patrons, all pouring into the poetry.

But if the movie were merely an exercise in Jarmusch’s fancy, it would be a pleasurable thing. It is a meticulously composed movie, shot beautifully by Frederick Elmes; every frame is a beauty. “Paterson” is ultimately more than a whim. It is a movie that actually grows more enigmatic on a second viewing. Asked at one point why he doesn’t carry a smart phone, Paterson responds that it would feel like a leash. And yet he hardly seems a person who would stray. At one point in the movie, Paterson, who maintains a stoic countenance in most circumstances, is forced to intervene before an act of violence is committed. His bearing in the aftermath is odd; he laughs, with a kind of horror. His calm surface disturbed, he reveals he’s fighting something within himself in order to maintain his equanimity. After that, we are shown a photograph of Paterson bearing military medals (the shot is a real picture of Driver during his time in the Marines). The film feels like one in which nothing is happening, but it’s not happening beautifully, and then there finally is a galvanic event that’s both heartbreaking and comical. And what happens after that is moving, and instructive. “I breathe poetry,” a character Paterson meets at the end of the film says to him as they both sit and look at the falls. That is ultimately the very real thing that the movie is about: the conviction that if you can live at least part of your life breathing poetry (and that poetry is not necessarily a verbal thing), you can make your life more worthwhile. 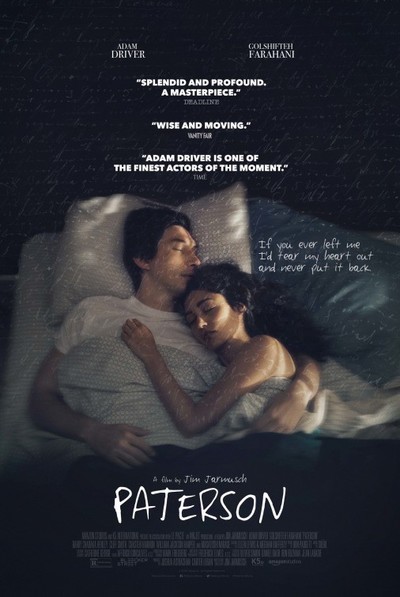