"Orpheus" is a Greek myth about a musician who descends into the underworld to reclaim his dead wife, and so enchants the gods with the music of his lyre that they permit her to return to the land of the living--on the condition that he never look at her. Jean Cocteau set his 1949 film of the story in modern-day Paris, and added twists that would have startled the Greeks, especially a romantic triangle with Death as the third partner.

"Orpheus" shows Cocteau's taste for magic and enchantment; he uses simple but dramatic special effects and trick shots to show his characters passing into the world of death by stepping through mirrors, and when he wants a character to spring back to life, he simply runs the film backward. He weaves his effects so lightly into the story that after a time they aren't tricks at all, but simply the conditions of his mythical world.

His story begins in the Poet's Cafe in Paris, where a famous middle-aged poet named Orpheus (Jean Marais) is scorned by younger poets who want to displace him. A brawl breaks out, and a young rival named Cegeste (Edouard Dermit) is struck down. A Rolls-Royce materializes, and its owner, a striking princess (Maria Casares), orders her chauffeur to put the young man in the back seat. Then she orders Orpheus to come along "as a witness," although their route takes them not to the hospital but into a cloudy shadowland that eventually becomes the underworld.

"Do you know who I am?" the Princess asks Cegeste. "I am your death." And so she is, looking like a dominatrix in her slinky black gown and severe makeup. Her chauffeur, named Heurtebise (Francois Perier), is a sort of guardian spirit who watches as she schemes. Orpheus returns with Heurtebise to the living world, orders the chauffeur to hide the Rolls in his garage, and becomes obsessed with the cryptic messages that come from the car's radio--messages that might be inspiration for his art. His wife, Eurydice (Marie Dea), is impatient with his obsession, and Heurtebise tries to comfort her. But eventually (to leap ahead) Eurydice is dead, all the principals are back in the underworld, and there are complications: Orpheus is in love with both his wife and the Princess, the Princess is in love with him, and the chauffeur is in love with Eurydice.

This is of course against all of the rules, and indeed the Princess may have caused Eurydice's death out of jealousy. Soon the principals find themselves testifying before a fact-finding tribunal of old and severe men. This sounds perhaps like an angel and reincarnation movie from modern Hollywood, and I foresee a remake with a rock star descending to hell, reclaiming his girlfriend and growing obsessed with MP3 files he downloads from Napster. But Cocteau's version has a mystery and beauty. He was not a prolific filmmaker (he was also busy writing poems, novels and plays, painting, sculpting and being addicted to opium). But when he made films, they proceeded not from commercial formulas but from the wellsprings of his unconscious, and as a fellow traveler of the surrealists he was not shy about bizarre imagery.

"Orpheus" became famous for its use of two leather-clad motorcyclists as the errand boys of death; their costumes, especially the high boots and leather corsets, edged into fetishism, and the Princess, arrogantly asking death's tribunal if she may smoke, is from the same image pool. Orpheus was played by the handsome Jean Marais (in real life, Cocteau's lover). Moviegoers in 1949 could find parallels between his career and the poet he was playing; both were famous at an early age, both were associated with important work (Marais as the Beast in Cocteau's 1946 masterpiece "Beauty and the Beast"), and both were keenly aware of a new generation snapping at their heels.

Cocteau himself would have been called a dilettante if he had not been so accomplished at the many arts he moved between. The joke was that if he had stayed with one thing--poems, painting, films, whatever--he would have been hailed as a master, but the public distrusted his versatility. He directed his first film, "Blood of a Poet," in 1930. It was produced by the Viscount de Noailles, who financed Salvador Dali and Luis Bunuel's "L'Age d'Or" in the same year; when their film was condemned by the Vatican, the viscount shelved it and timidly delayed the release of "Blood of a Poet" for two years. (It went on to become a famous surrealist work that played daily for 15 years in one New York theater.)

Cocteau claimed to think little of his first film, although modesty did not prevent him from mentioning its 15-year run in his memoirs. He didn't direct another until "Beauty and the Beast" in 1946. Then there was the 1948 masterpiece "The Storm Within." "Orpheus" has been linked in a trilogy with "Blood of the Poet" and the minor "Testament of Orpheus" (1959), but it stands alone.

Seeing "Orpheus" today is like glimpsing a cinematic realm that has passed completely from the scene. Films are rarely made for purely artistic reasons, experiments are discouraged, and stars as big as Marais are not cast in eccentric remakes of Greek myths. The story in Cocteau's hands becomes unexpectedly complex; we see that it is not simply about love, death and jealousy, but also about how art can seduce the artist away from ordinary human concerns, so that after Orpheus astonishingly returns from the land of death, he is more concerned with the nonsensical radio transmissions than with his wife who loves him. (A cynic might whisper in his ear that a trip to the underworld is more inspiration than most poets ever receive.)

Marais, tall and with a great shock of hair, cuts a fine figure as the famous man. Francois Perier, as the chauffeur, plays the second most important character in the play, although we realize that only belatedly. Marie Dea uses some nice, almost comic, timing after returning from the dead, in a series of scenes where Orpheus almost but not quite looks at her.

The film is not perfect. A subplot involving Eurydice's involvement with Aglaonice (Juliette Greco) and her "League of Women" is left hanging. The weakness in the cast is Maria Casares, as the Princess, death's embodiment. She lacks the presence for the role. Despite all the tricks of costuming and makeup, she is slight and inconsequential. Cocteau wanted either Greta Garbo or Marlene Dietrich, and to imagine either one as the Princess is to see the film with its final piece in place. (There is a moment that would have become famous if performed by either one; after the tribunal abruptly disappears, the Princess turns to the chauffeur and observes, "If this were our former world, I'd say, `Let's have a drink.' ")

One of the pleasures of the film is to see how audacious the tricks are in their simplicity. Rubber gloves leap onto hands in reverse photography. Glass jumps back into its frame. Mirrors are sometimes mirrors and sometimes sets on the other sides of mirrors. As characters emerge from mirrors, Cocteau simply cuts to their hands being lifted from a still pool of water that still reflects their faces. Just once he uses a technique he also used in "Beauty and the Beast," where a character is pulled on a wheeled platform we cannot see, so that he appears to be gliding.

The characters themselves are never overplayed, never too dramatic, never reaching for classical effects as if they knew they were in a Greek myth. The humor, when it comes, is dry. Certain lines, not too many, employ Cocteau's own poetic language. The best is: "Mirrors are the doors through which death comes and goes. Look at yourself in a mirror all your life and you'll see death do its work." 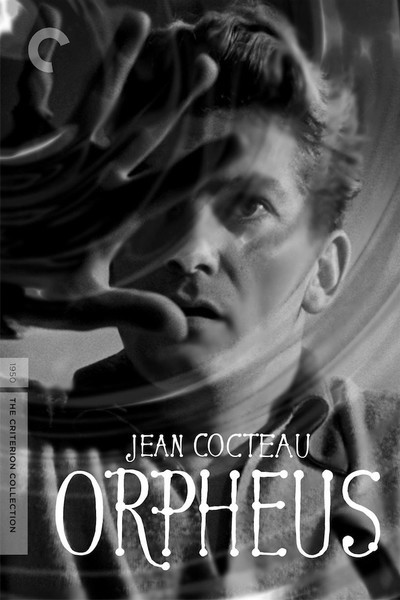