In 1998, three middle-school teachers in Whitwell, Tenn. (pop. 1,500) came up with a project for the eighth grade class: Learn about intolerance by studying the Holocaust. The students read The Diary of Anne Frank and did internet research, discovering that during World War II, the Norwegians wore paper clips in their lapels as a silent gesture of solidarity and sympathy with Hitler's victims.

A student, no one seems to remember which one, said it was impossible to imagine six million of anything, let alone Jews who died in the Holocaust. That led somehow to the notion of gathering six million paper clips in one place at one time, as a tribute to the victims. The project started slowly, with a clip here and a clip there, and 50,000 from one donor, and then the Washington Post and Tom Brokaw got on the story and by the time Whitwell's third group of eighth graders were running the project, they had 29 million paper clips.
Advertisement

That could be a story like the one about the kid who was dying and wanted to collect business cards, and got millions and millions as his desperate parents announced he had recovered and no longer wanted more cards. But the Whitwell story goes to another level, a touching one, as the students make new friends through their project. Two of them are Peter and Dagmar Schroeder, White House correspondents from Germany, who visit the town and write about it. Many more were Holocaust survivors, who as a group visited Whitwell for a pot-luck dinner at the Methodist church, classes at the school, and a community reception.

And then there was the train car. The Schroeders found one of the actual rail cars used to transport Jews to the death camps, and arranged for it to be shipped to Whitwell. Local carpenters repaired the leaky roof and rotting floor, and the car was placed outside the high school as a Holocaust memorial. Inside were 11 million paper clips, representing six million Jews and five million gypsies, homosexuals, Jehovah's Witnesses and others who were murdered by the Nazis. Also a suitcase which German children had filled with notes to Anne Frank.

"Paper Clips," which tells this story, is not a sophisticated or very challenging film, nor should it be. It is straightforward, heartfelt and genuine. It plays more like a local news report, and we get the sense that the documentary, like the paper clip project, grows directly out of the good intentions of the people involved. Whitwell at the time had no Jews, five African-Americans and one Hispanic, we learn; there weren't even any Catholics. By the time the project was completed, the horizons of the population had widened considerably.

David Smith, one of the teachers involved, says he knows he is stereotyped as a Southerner, and admits that he stereotypes Northerners. In changing their perceptions about minorities, the students of Whitwell also changed perceptions others may have held about them. That America has been divided by pundits into blue states and red states does not mean there are not good-hearted people living everywhere; in a time of divisiveness, there is something innocently naive about the paper clip project, which transforms a silly mountain of paper clips into a small town's touching gesture. 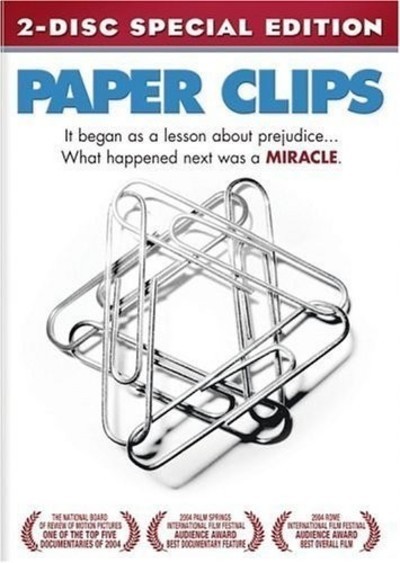