The Norwegian coming-of-age drama “Out Stealing Horses” is very Scandinavian. Based on Per Petterson’s acclaimed novel, it's the kind of movie that starts with two old men exchanging pleasantries, like “there are wolves in the forest,” just outside of an isolated cabin during a snow storm (or, according to contemporary Norwegian cinema: Thursday).

“Out Stealing Horses” is also the kind of movie that only concludes after 67-year-old widower Trond (Stellan Skarsgård) repeats a typically macho quote from his long-dead father (Tobias Santelmann, playing a character that’s never named): when it comes to psychological trauma and/or physical pain, “we do decide for ourselves when it will hurt.” The rest of “Out Stealing Horses” is a series of flashbacks that illustrate how young Trond (Jon Ranes), during the summer of 1948, came to be as emotionally distant as he is in the movie’s present day of 1999.

If you’re like me, you might find it hard to stay emotionally invested in Trond’s progress as the tone of writer/director Hans Petter Molland’s adaptation shifts abruptly to and from chilly 1999-set scenes and half-cooked 1948 flashbacks, the latter being an unrewarding mix of syrupy romanticism and arms-length stoicism. Molland (“Cold Pursuit,” “In Order of Disappearance”) sometimes strikes an uneasy emotional balance, but “Out Stealing Horses” is rarely as tough as it is satisfying.

Most of the movie’s tedious heaviness can be chalked up to Molland’s overwhelming need to make us respect (or maybe just relate with) old man Trond, whose character-defining reserve is more than established when he, living in a Swedish cabin in 1999, wakes up to find that snow has drifted into his cabin’s windows. Trond’s wife died in a car accident three years earlier, but while he was driving at that time, he’s not exactly verklempt about it. “I was driving” he tells us through typically clipped voiceover narration. “I don't feel guilt. Only loss.”

Ok, but how come, and why now? Trond’s past provides some answers, but only after he, still 67 years old, checks on a noise in his front yard and unexpectedly bumps into Lars (Bjørn Floberg), a neighbor. At the time, Lars is looking for his dog. “I killed a dog once,” Lars says. “I promised myself I'd never do it again.” This unnerving encounter leads Trond to recall the summer of 1948, when he was 15 years old, and his dad was the center of his universe. Trond remembers watching his father pull thistles from their lawn, and then rest his puffy forearms on their dinner table: “It will hurt[…]You decide when it will hurt.” Trond also remembers when his father’s stubbornness inadvertently led to a logging incident that crippled one of his neighbor’s parents. Because naturally “I decide when my timber is to be felled.” And in this slow, roundabout sort of way, Trond also remembers meeting Lars when he was a boy, though neither man makes a big deal out of it. “I know who you are,” Lars says. “I know who you are, too” Trond says. “I thought you did,” Lars says back. Good talk, guys.

Trond’s flashbacks also only reveal so much about Santelmann’s character since the old man is rarely shown to be more tender than his pleather-tough exterior. In an uncharacteristically emotive scene, he embraces Trond and encourages him to let go of his pain. “You can't use it for anything,” dad says. That quote’s only so generous, though it is telling: Trond’s flashbacks aren’t his way of retrospectively processing the sort of complex emotions that he didn’t allow himself to feel when he was younger. Really, “Out Stealing Horses” is more concerned with how old man Trond has now accepted that he can’t, and maybe doesn’t really need to reconcile himself with his past. He’s in control, as his father says, but that doesn’t need to be a sign of personal repression. Too bad, because it often looks that way, especially whenever something traumatizing and/or exciting happens (watch out for those tiny bird eggs, that lady’s bare knees, and that loaded rifle, too).

“Out Stealing Horses” consequently often seems to be a defensive corrective to the usual coming-of-age story, where an older man reaches an emotional breakthrough after raking his memories over the proverbial coals. Trond’s eureka moment is, by contrast, more of an anti-breakthrough: he sees his adolescence in a new and inadvertently mysterious light after he comes to a new understanding of his father’s tough guy philosophy. I mean, maybe “we do decide for ourselves when it will hurt,” but I have no idea why based on what Molland shows us on-screen. There’s some appreciable serenity and a lot of personal grief on display in “Out Stealing Horses,” but it’s only visible in fits and starts.

Now available in theaters and on demand. 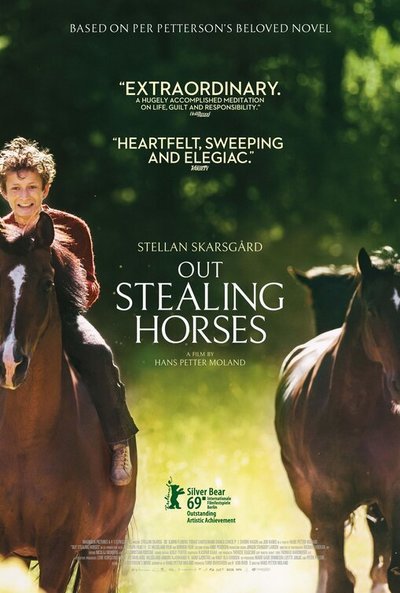 Gard B. Eidsvold as Franz