Our Time Will Come

"Our Time Will Come," a new WWII drama set in Japan-occupied Hong Kong, is a surprisingly affecting call to arms. The characters in this film are defined by motives that are small enough to be relateable and actions that are big enough to be inspiring. This movie is also the kind of historical fiction that used to be dismissed as "middlebrow," and "uncontroversial" when films of its type were championed by Miramax in the '90s. "Our Time Will Come" is getting a relatively modest theatrical release thanks to the good folks at China Lion. But it has a low-key urgency that makes it one of the month's most essential theatrical releases.

Directed by Ann Hui ("A Simple Life," "The Postmodern Life of My Aunt"), "Our Time Will Come" often seems to concern the sudden and unexpected ways that politics define the every-day lives of Communist-sympathizing citizens, like reserved teacher Lan Fong (Zhou Xun) and her equally demure mother (Deanie Ip). Yes, Fong and her daughter are portrayed admiringly by Hui and screenwriter Kei-ping Ho for their commitment to fighting imperialism at home. But almost every interaction these characters make is undercut by necessity or skepticism. Resources are scarce, and allegiances are routinely tested because everything in 1942 is political, and therefore impersonal after a point. This is an unsentimental war movie about characters who are forced to consider and live with the consequences of their actions.

"Our Time Will Come" begins as a spy thriller of sorts. The Fongs are, unbeknownst to them, leasing an apartment to a subversive writer who goes by the pen name of Mao Tun (Guo Tao). They only learn of their tenant's double life on the day that Chinese guerillas aid Mao in fleeing the country. We get vital context that the Fongs don't, like scenes where the guerillas plot a mass evacuation of dissident Chinese intellectuals, and bully a greedy local bandit into letting them pass through his territory.

But the war's influence on the Fongs' lives is not as comprehensible or neat. Mrs. Fong finds a dead Japanese spy's body on her front door. Lan's first-hand knowledge of the Communists comes from her boyfriend Gam-wing (Wallace Huo), a Communist guerrilla who (unsuccessfully) proposes marriage, and then flees on a mission. Lan is suspicious of her lover, and asks him why he wants to be engaged to her if he's leaving. Eventually Lan joins Gam-wing in fighting the Japanese by spreading propaganda and looking after Communist sympathizers. And even Mrs. Fong, after vocally protesting to her daughter, helps her neighbors and offers to share her food with her daughter's colleagues.

Many of the interactions that determine and guide people's principles in "Our Time Will Come" are strictly transactional. People act out ideology for selfish or petty reasons, like the tyrannical Japanese soldier who tests a group of guerrillas' cover stories by sticking a bayonet in the belly of their "dead father" (actually the corpse of a Japanese spy that they encounter). The film's villains are, in this way, easily understandable in their lust to maintain power, like the Japanese-sympathizing Indian soldiers who discover a Communist plot when they frisk an old Chinese woman to see if she's hiding money.

Hui and Ho even find ways to humanize Lan's character-defining optimism. Lan eventually resolves to help the guerrillas because she's intoxicated by the suspense and romance of passing out leaflets and making a difference. She is almost never just a propaganda-spouting hero, though she does chide her mother when Mrs. Fong insists that one person cannot make a difference. Lan knows than a gesture as innocent-seeming as a shared meal is never so unassuming during wartime. And when things go wrong, she questions her actions.

The drama in "Our Time Will Come" is consistently measured and thoughtful. Every exchange feels like it's stripped down to basic motives and sentiments, and is rarely recast through the rose-colored glasses of revisionism. This is true even in a comparatively saccharine-y action scene where two guerrillas are fired upon by Japanese soldiers in slow-motion. The hail of bullets looks a lot like a swarm of fireflies. but even in this unbelievable moment, Hui and Ho try to get you to appreciate the difficulty of doing what you think is the right thing simply by acknowledging that political action can, in the moment, feel thrilling. Scenes like this may add emotional complexity to a film that often threatens, but never actually becomes, too dry or stuffy for its own good.

I love "Our Time Will Come" for the way its' creators represent how hard it is to live out your beliefs. Characters commit to their respective causes for their own private reasons. Their commitments sow an air of mistrust, and tetchiness that Hui and Ho acknowledge throughout the film's relatively fast-moving 130-minute running time. There are spies and allies everywhere, and the person who extends a hand to a character in one scene might not seem as altruistic in the next.

But in addition to the threat of reprisal, there is also joy in camaraderie that comes from throwing yourself into a cause. Here's a film that suggests that we cannot afford to stand idly by while our neighbors and loved ones need our help. It's also a movie that understands the false comfort and high risks that people assume simply by doing nothing. "Our Time Will Come" is a welcome reminder that, while life eventually goes on with or without our political contributions, we don't get to survive long enough to remember the past if we don't protect each other now. 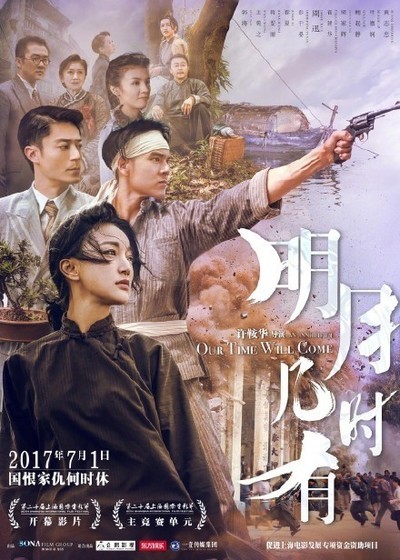