While we live in an era when practically any successful property can get a remake, sequel, or reboot, the number of people who would have guessed that such an honor would be bestowed on 2009’s “Orphan” was probably not very high. Not only does “Orphan” feel like a film that left the pop culture zeitgeist years ago, it’s kind of a standalone story. It’s an underrated thriller (although Roger got it) about a couple (Vera Farmiga & Peter Sarsgaard) who adopt a Russian girl named Esther (Isabelle Fuhrman), who turns out to be a sociopathic adult and, well, not an actual child. It’s got some nice tension-building from Jaume Collet-Serra and some committed performances from its cast, but even fans weren’t screaming for a follow-up. Most of this week’s “Orphan: First Kill” makes it clear why that is. In fact, if not for its wonderfully campy leading lady and some nice vamping from one of her co-stars, it would be completely disposable. It seems unlikely that this will turn Esther into a horror icon like Chucky, Jason, or Freddy. Although its very existence seemed unlikely a few years ago, so who knows?

Fans of the first film will remember that Esther escaped an Estonian mental hospital before finding her way to a new family, and “First Kill” basically documents a little trouble she got into along the way. With the mystery of Esther’s murderous background in the rearview mirror, “First Kill” centers her as more of a traditional slasher villain in early scenes, willing to do anything to get her freedom. After she escapes, she comes up with a plan to find safety in a wealthy family in the States, choosing to impersonate the missing child of the Albrights. Mother Tricia (Julia Stiles), father Allen (Rossif Sutherland), and brother Gunnar (Matthew Finlan) are shocked to see their little girl return to the Albright family estate even if a few things about her story don’t seem to add up. When it turns out that the Albrights have a secret that rivals Esther’s, a showdown is inevitable, although making this a prequel drains a little bit of the tension because our anti-heroine has to survive to make the first film possible.

One of the big problems with “Orphan: First Kill” is that it’s helmed by the stunningly unambitious William Brent Bell, the man behind “The Devil Inside,” “The Boy,” and “Separation.” He’s stubbornly uninterested in creating visually impressive compositions, almost always content to just throw the action into frame with little concern over blocking or framing. “Orphan: First Kill” looks flat (and often cheap), when it really needs a visually astute director to come at it with the same out-there glee as Fuhrman and Stiles. Even writer David Coggeshall knows that fans of the original can’t be shocked by that movie’s twist again, and so he tries to one-up it with a bonkers turn in the middle of the film that won’t be spoiled here (but is just crazy enough that I almost want to recommend seeing it.) Bell makes out better here than in most of his movies because he’s got more to work with, but he seems to always be willing to play it safe when this movie needed someone to embrace the insanity of its very existence.

Fuhrman and Stiles understood the assignment. Fuhrman, so good in last year’s “The Novice” too, knows how to play coiled tension and she holds together a lot of the film through her sheer will. And then there’s Stiles, who goes from grieving mother to something with sharper edges as the actress sells some of the film’s more out-there turns. There are opportunities wasted here to dig into family roles and class commentary, but that’s often overcome by how much fun Furhman and Stiles seem to be having in the film's second half.

It's almost enough to make you wish Fuhrman would return for another “Orphan” flick. This time its existence won’t be so unexpected.

Now available in theaters, on digital, and streaming on Paramount+. 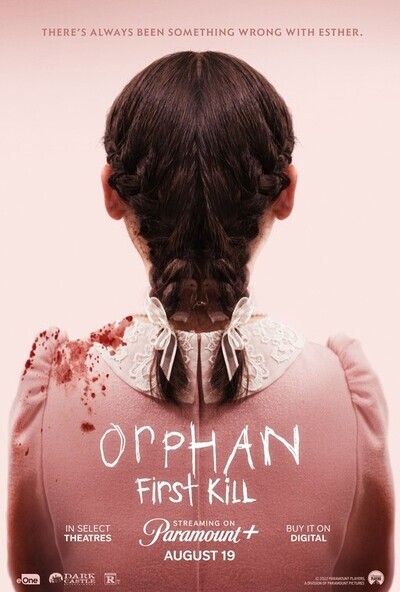