The first thing you notice while watching “The Novice” is the sound design, delicately layered and interwoven: gentle music, water, wind, birds, breath, the scribbling of a pencil, the pounding of running shoes. And underneath it all, the slightest rumble, steadily building and churning, creating an inescapable feeling of danger.

The feature filmmaking debut from writer/director/co-editor Lauren Hadaway is an intimate and powerful sensory experience all around, but it’s the sound editing—Hadaway’s first calling, having worked with the likes of Quentin Tarantino, Zack Snyder, and Damien Chazelle—that grabs you off the top and envelops you throughout. But she also creates a dark and vivid sense of place within the competitive world of collegiate rowing, making a scenic campus feel increasingly claustrophobic and sinister.

And in Isabelle Fuhrman, she’s drawn an intense and precise performance as the young woman pushing herself to the breaking point in pursuit of athletic excellence. Sports movies about men usually depict such a singular drive as noble and even inspirational, and definitely a goal to which others should aspire. But a woman’s quest for perfection too often comes off as an indication of instability: She must be crazy, what’s wrong with her? Inspired by her own experience as a college rower (at my alma mater of Southern Methodist University, Go Mustangs), Hadaway seeks to understand the spark that ignites such obsession, and Fuhrman—best known prior to this as the deeply creepy star of “Orphan”—brings her character startlingly to life. As freshman Alex Dall, she gives a performance that’s committed both physically and emotionally. What’s even more impressive is that she achieves so much wordlessly, simply through the flicker in her dark eyes or a shift in the way she carries herself. Watching her character destroy her body and mind in the name of athletic greatness won’t make you want to run out and follow her example, but it’ll intrigue you as to why she does it.

Rowing just happens to be the latest activity Alex has thrown herself into wholeheartedly. The freshman’s Type-A urge to work harder than everyone else also manifests itself in her classes, where she’s usually the last to leave because she’s repeatedly poring over tests in minute detail. That’s how she’s gotten a full-ride presidential scholarship to this esteemed, East Coast university, and it’s what inspires her not only to make the rowing team but also to reach the varsity level in just her first year. Her equally ambitious frenemy, Jamie (a tightly wound Amy Forsyth), works just as hard but for a different reason: A lifelong multi-sport athlete, she needs the scholarship money to stay at this school. She’s also the better rower, so while Alex is constantly demanding of herself, Jamie provides her with a specific target to surpass.

Marking her story in chapters month-by-month in a raw scribble, Hadaway traces Alex’s evolution from eager newbie to exhausted climber, as she dares to take on the more established rowers for a seat in one of the elite boats. Working with fellow editor Nathan Nugent (“Room,” “Disobedience”), Hadaway briskly reveals the grueling schedule Alex endures as she struggles to juggle academics and athletics. Even the training montages—a standard trope in any sports movie—feel inspired here, with crisp pacing, creative camera angles, and the occasional slow-motion sequence set to a classic tune like Brenda Lee’s “I’m Sorry.” The spry, string-heavy score from Alex Weston contributes greatly to the feeling of momentum and, increasingly, anxiety.

But no matter how hard she works, how strong she gets or how much she improves her times, Alex is always an outsider. The rowing-team setting is specific and detailed, but the way in which Alex is hard on herself in all parts of her existence will be relatable to so many women in various stages of their own lives. Alex’s girlfriend (played by the cool and alluring model/actress Dilone) is one of the many people telling her to relax and slow down. So do her coaches (Jonathan Cherry, Kate Drummond, and Charlotte Ubben, all strong in key supporting parts), who’ve been around the sport for a while and know how grueling it is. As Alex truly reaches the point of snapping, Hadaway returns to a couple of disturbing images—menacing ravens cawing, a crab in a pot of boiling water—a few times too many. Fuhrman’s performance, and the evocative cinematography from Todd Martin, make her deteriorating mental state disturbingly clear.

It’s not all torture, though. There are some sequences in the middle of “The Novice” when Alex is firing on all cylinders, when she’s not only keeping pace but exceeding her own expectations. These are the moments when she—and Hadaway—do slow down for a moment to lay back and take a breath, to notice the trees and the hypnotic sound of water lapping against the oars. Such scenes of peaceful solitude and satisfaction are crucial to us understanding why she pushes herself so hard—and why she makes her final, surprising decision. Hadaway’s last shot is powerful in its direct simplicity, and it’ll make you look forward to whatever challenge she takes on next. 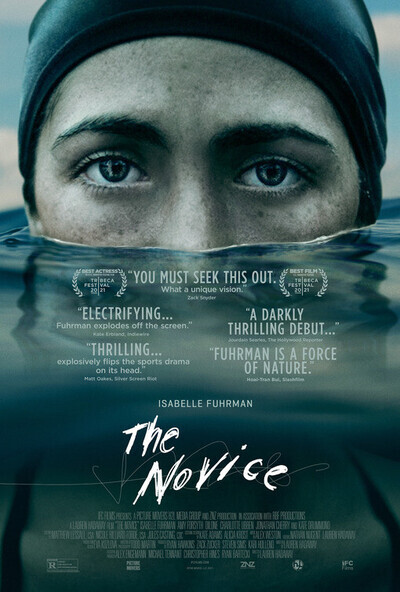 Rated R for language, some sexuality and brief disturbing material.