Heavily inspired by Alfred Hitchcock's influence on Brian De Palma, Nacho Vigalondo’s “Open Windows” goes from crazy to Crazy to CRAZY, but maintains enough energy and cultural currency to keep the entertainment value high. It’s one of those admittedly silly films that moves so quickly that one rarely has time to question its logic. Consider that a piece of advice. If you think about any of the dozen or so twists in “Open Windows” for even a few seconds, the entire exercise falls apart. However, there’s enough filmmaking skill and an enticing melting pot of commentary on celebrity and hacker culture to keep it humming. It’s nonsense, but it’s glorious nonsense.

Nick Chambers (Elijah Wood) runs a website devoted to his favorite starlet, Jill Goddard (Sasha Grey), star of a series of sci-fi action flicks called “Dark Sky.” Jill is appearing at a convention in Austin, where Nick has been told he has won a blogger contest to have dinner with his beloved actress. Sitting in his hotel room, watching Jill’s latest public appearance online, Nick gets a call from a mysterious man named Chord (Neil Maskell). The man on the other end of the line begins to manipulate Nick, telling him that Jill has canceled their date before giving the fan access to her cell phone. They can see and hear Jill’s every action, including breaking up with her actor boyfriend and going to meet her new beau in the same hotel at which Nick is staying. At first, it’s “Rear Window” with modern technology—the pane of glass replaced by a smartphone, the new way to play peeping tom. The first act feels like a clever commentary on how much celebrities “owe us,” especially in the era of the hacked celebrity photos scandal.

Then Nick leaves his room. At the end of the stellar first act, Nick starts running around the halls with his laptop, playing puppet on a string to Chord’s demands and “Open Windows” goes from thriller to insanity. Did I mention yet that the whole thing takes place on that laptop screen? Yes, it’s a series of “open windows,” displaying Nick’s webcam, Jill’s phone cam, a dashboard cam, etc. It’s a clever concept that threatens to completely collapse, especially when Vigalondo tries to stage a car chase with this structure, but it never quite does. Again, it’s the kind of thing that if one questions with any sort of intensity, their eyes will roll. And yet, thanks in large part to incredibly tight editing by Bernat Vilaplana, I kept my disbelief suspended. It’s a gimmick that so openly announces and presents itself that it’s hard to criticize. As De Palma often did in his crazier moments, it’s a filmmaker who knows he’s pushing the boundaries of logic but does so with just the right amount of confidence. And “Open Windows” gets crazier and crazier, which I’ve always considered a positive thing. I have a much bigger problem with films that pretend to be extreme than those that go off the rails. “Open Windows” flies off the rails of logic in style.

Mostly. There could have been a few more believable reactions by the people involved in this insanity. Nick so openly does whatever Chord says in the first act that it’s hard to believe he’s ever even seen a movie much less runs a website devoted to them. (Didn’t he see “Grand Piano,” another Wood vehicle from this year that featured a distant tormentor and could be called De Palma-esque?) It’s a product of the plot that Nick openly accepts as much as he does. As is the fact that Jill quickly follows almost every order. They’re cogs in Vigalondo’s machine as much as Chord’s elaborate plan.

And yet my problems with the shallow characters of “Open Windows” are offset by the tight pacing and, even more than that, the cultural commentary for which Vigalondo aims as a writer. He’s playing with the era of anonymity. It actually makes sense that Nick would be more likely to trust a voice on a laptop than it might have ten years ago, given how much we are all living electronically. The combination of anonymity on the internet with a complete lack of privacy in celebrity culture creates a fascinating crossroads in “Open Windows.” How many people out there don’t even want to use their real names online but expect to know every little detail about their favorite actress? Vigalondo stages the only kind of thriller he could in this pop culture dichotomy—a crazy one. 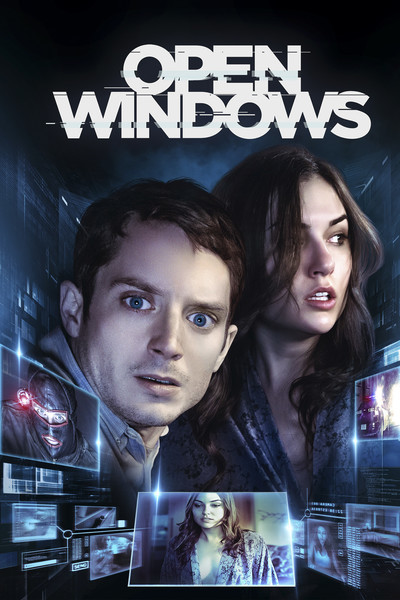