"Grand Piano" is a tidy and tension-filled exercise in terror that takes stage fright to literal extremes. Save for a few brief opening interludes aboard an airplane beset by turbulence and a sequence inside a limo, the entire enterprise takes place in a Chicago symphonic hall during a musical performance.

Spanish director Eugenio Mira has acknowledged his debt to the cymbal-clanging climax in Alfred Hitchcock's "The Man Who Knew Too Much". But there is a sumptuous lurid sensibility lurking as well, from the sweeping camera choreography to the art-deco style fan of crimson amid gold and black that forms the stage backdrop. Think of it as a diabolical blend of Brian De Palma and Dario Argento by way of "The Phantom of the Opera".

Elijah Wood, sporting that same sort of wide-eyed woeful countenance that served him well as ring-bearer Frodo Baggins, is Tom Selznick, an anxious piano prodigy making a comeback backed by a full orchestra after a five-year absence. The pressure is on after he famously choked during his last concert while attempting the notorious La Cinquette—better known as "the unplayable piece." That it was composed by his deceased mentor, whose haunting bearded visage glares from a photo and poster as Tom enters the auditorium and whose ominous customized Bosendorfer piano joins Tom onstage as a kind of ominous supporting character, makes matters all the creepier.

With everyone reminding him of his past failure—including his lovely and lissome actress wife, Emma (Kerry Bishe), who arranged for this appearance with hopes of restoring her husband's confidence, a radio interviewer (voiced by none other than E.T.'s adoptive mom Dee Wallace) who needles him about his nerves and even the well-wishing fellow musicians and crew at the hall—Tom is sweating through his tux before he even strikes a single key.

But his unease only increases once he begins to play and spies a message written in bright red on his sheet music that practically shouts amid the black-on-white notations: "Play one wrong note and you die." A sniper is afoot, as evidenced by the floating red laser dot that indicates a rifle is at the ready, and his taunting threats soon fill Tom's head through an earpiece as the pianist feverishly struggles to continue tickling those ivories.

Mira isn't content to have Tom simply sit on his bench and suffer, however. Instead, there are breaks between movements, allowing him to race backstage to his dressing room or down the stairs to the bowels of the hall. A suspenseful intermission occurs right before he is forced to fulfill a request by the fiend in his ear to perform, yes, the unplayable piece. It's a pleasant and effective surprise that the original composition heard on the soundtrack (written by Spain's Victor Reyes) actually fits that imposing description.

Not that the formal setting doesn't allow for touches of humor, such as the name of the venue: Antoine Michelle Hall—an apparent playful reference to actor Anthony Michael Hall, a regular in films by Chicago-based filmmaker John Hughes.

At a youthful 33, Wood seems a little young to hover on the verge of being washed-up. But he certainly brings a commitment to the difficulties involved in the role—including believably playing the piano—and a jolt of panicky energy. John Cusack is an inspired choice as the puppet master pulling Tom's strings, his voice tinged with both danger and smugness. It brings to mind the star's grouchy assassin from the under-appreciated dark comedy "Grosse Pointe Blank" in the best way possible.

Not that there aren't a few discordant moments onscreen, including how certain details about the reason behind this elaborate stunt are explained with dialogue that is sometimes hard to catch and lead to a revelation that is ultimately a letdown. Some of the acting also comes close to amateurish over-mugging, particularly Alex Winter of "Bill & Ted's Excellent Adventure" fame as Cusack's flunky and Tamsin Egerton as Emma's vapid friend who incessantly gripes about her gratis seat.

But by the time the rafters threaten to come crashing down, it is easy to appreciate the grandly ambitious attempt at old-school filmmaking that Mira has somehow pulled off, even if his conclusion is less satisfying than the build-up. When sloppy improvising and slapdash production values are common in movies these days, someone who manages to be this stylishly ambitious and clever deserves to take a bow. 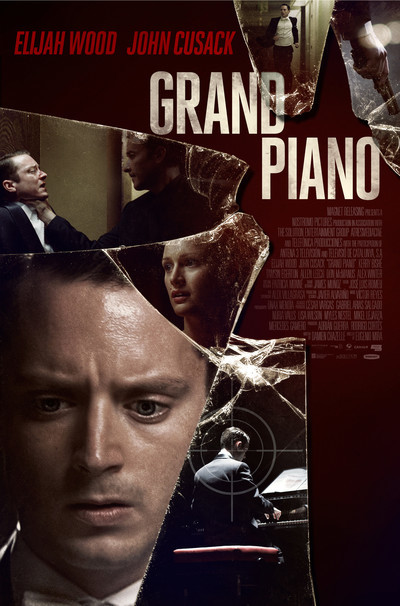