Four years ago, Nadia Murad Basee Taha was a teenager living in a Yazidi farm community in the Sinjar district of Iraq when ISIL took over the town, murdered 600 people, and captured the women and girls as sex slaves. She escaped three months later and has spent most of the time since speaking out on what happened to her and her people. This month, she was awarded the Nobel Peace Prize. This award-winning documentary tells her story.

Director Alexandria Bombach understands that there are two stories here. First there is the inspiring story of a young woman who had no ambitions of becoming a world figure but who overcame unthinkable loss and trauma by devoting herself to helping others. Then there is the story of a young woman who is forced to relive her most painful experience over and over and who is constantly bombarded by the overwhelming needs of others, from the photo-op sympathy of politicians and journalists to the heartbreak of her surviving community, most still living in refugee camps, who sob in her arms and beg her to get them some help.

Mostly, Bombach just lets the camera sit quietly as Murad goes through her exhausting schedule of meetings, media appearances, and book signings. She captures some telling images: a refugee lowering his fishing line into the ocean through a cracked panel in the fence around the camp, Murad touching a heavy chain around a locked gate, Murad’s comment on seeing a school marching band practice, “If this were in Iraq, someone would blow himself up.” She gazes into a beauty salon mirror as her hair is wrapped around a curling iron. In one of her appearances before a UN assembly, we will learn something about what her long hair means to her.

Murad wants the world to hear her story and she is focused on a particular goal. She wants to be on the agenda of the meeting of world leaders in New York, to ask them to declare what happened to her people an official genocide and to give them justice. The process for getting the opportunity to speak to the assembly of Presidents and Prime Ministers is a daunting one. Early in the film she is preparing for what amounts to an audition. She will speak to a committee at the United Nations, and if she passes muster, she can move up to the next level.

The time limit is strict. Her rehearsal for the initial presentation is 50 seconds over time so she has to figure out what to cut. If she takes out too much detail, the plea for help will have no weight. If she takes out the plea, she will leave without presenting a challenge to be met. When she has to shorten the speech for the final version, she eliminates the call to the world leaders to imagine what it would be like to be enslaved by ISIS because “What’s the benefit of asking them to imagine?”

The film’s most affecting moments are when Murad speaks directly to the camera. She says that the only way she can deal with what she has suffered is to devote herself to helping the other girls who suffered, too, but do not have the opportunity to bring their stories to the world. She says she feels worthless, and will always feel that way until her people get justice.

She was content in her home in Sinjar, she tells us, doing chores, tending sheep, spending time with family, and hoping she could become a hairdresser, a place “where women and girls would see themselves as special.” She wishes that people would know her as an excellent seamstress or athlete, not as a victim of ISIS terrorism.

It is at best bittersweet when she is named a goodwill ambassador by the UN. Her title carries as much tragedy as honor: Goodwill Ambassador for the Dignity of Survivors of Human Trafficking. As Murad makes clear in her three minutes, there is no dignity without justice. There is only one border, she tells the presidents and prime ministers, “the border of humanity.” We see this movie to learn who the young Nobel Peace Prize winner is, but in the end, it is about her challenging us to learn who we are. 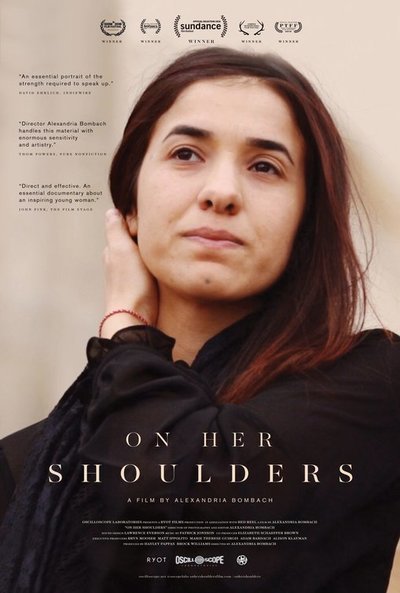