A family heads to a secluded beach vacation. They speak vaguely of the passage of time in a way that parents often do with their children, as mom mentions how she can’t wait to hear her daughter’s singing voice when she grows up. Shortly thereafter, it’s revealed that mom may not be able to do that because she has a tumor and this could be a "last trip," either because of her physical health or the health of her crumbling marriage. The passage of time changes at different points in your life, but especially when you see your kids growing up too fast and when you worry you might not be able to witness the bulk of their journey. When M. Night Shyamalan’s “Old,” based on the book by Pierre-Oscar Lévy and Frederick Peeters, is playing thematically with those feelings and allowing itself to be surreal and scary in the process, it truly works. When it feels like it has to nail down specifics, such as in a disappointing final stretch, it crosses that median line into the silly lane. The mysteries of aging are something everyone considers—“Old” taps into those considerations with just enough style to engage before stepping back from its own edge.

The family in the opening scene consists of Guy (Gael García Bernal), Prisca (Vicky Krieps), Trent (Nolan River) and Maddox (Alexa Swinton). The resort manager tells them about a secluded beach where they can avoid the touristy crowds, and they’re taken there by none other than Shyamalan himself in maybe his most meta cameo (after all, he’s the director, assembling all of his players on the sandy stage). Guy and Prisca’s clan isn’t alone. They’re joined by a doctor named Charles (Rufus Sewell), his wife Chrystal (Abbey Lee), his mother Agnes (Kathleen Chalfant) and his daughter Kara (Mikaya Fisher). A third couple joins them in Jarin (Ken Leung) and Patricia (Nikki Amuka-Bird). All of the travelers meet a mysterious traveler at the beach when they arrive in a rapper named Mid-Sized Sedan (Aaron Pierre). And why is he bleeding from his nose? And is that a dead body?

From their arrival, the beauty of this beach, surrounded by steep stone, feels threatening. The waves crash and the rock wall almost seems to grow taller as the day goes on. When they try to walk back the way they came, they get faint and wake up on the beach again. And then things get really weird when Trent and Maddox are suddenly significantly older, jumping about five years in a couple hours. The adults figure out that every half-hour on this beach is like a year off of it. As the kids age into Alex Wolff, Eliza Scanlen, and the great Thomasin McKenzie, the adults face their own physical issues, including hearing/vision problems, dementia, and that damn tumor in Prisca’s body. Can they get off the beach before 24 hours age them 48 years?

What a clever idea. Rod Serling would have loved it. And “Old” is very effective when Shyamalan is being playful and quick with his high concept. “Old” doesn’t really feel like a traditional mystery. I never once cared about “figuring out” what was happening to this crew, enjoying “Old” far more as surreal horror than as a thriller that demanded explanations. Having said that, it sometimes feels like Shyamalan and his team have to pull punches to hold that PG-13. I wondered about the truly gruesome, Cronenberg version of this story that doesn’t shy away from what happens to the human body over time and doesn't feel a need to dot every 'i' and cross every 't'.

The actors all seem like they would have been willing to go on that more surreal journey. Most of the ensemble finds a way to push through a script that really uses them like a kid uses sand toys on a beach, moving them around before they wash away with the tide. Stand-outs include Sewell’s confused menace, McKenzie’s palpable fear (she nails that the best, by far, understanding she's in a horror movie more than some of the others), and the grounded center provided by Bernal and Krieps.

A director who often veers right when he should arguably go left, Shyamalan and his collaborators manage their tone here better than he has in years. Yes, the dialogue is clunky and almost entirely expositional regarding their plight and attempts to escape it, but that’s a feature, not a bug. “Old” should have an exaggerated, surreal tone and Shyamalan mostly keeps that in place, assisted greatly by some of the best work yet by his regular cinematographer Mike Gioulakis. The pair are constantly playing with perception and forced POV, fluidly gliding their camera up and down the beach as if it’s rushing to catch up with all the developments as they happen. Some of the framing here is inspired, catching a corner of a character’s head before revealing they’re now being played by a new actor. It’s as visually vibrant a film as Shyamalan has made in years, at its best when it's embracing its insanity. The waves are so loud and the rock wall is so imposing that they almost feel like characters.

Sadly, the film crashes when it decides to offer some sane explanations and connect dots that didn’t really need to be connected. There’s a much stronger version of “Old” that ends more ambiguously, allowing viewers to leave the theatre playing around with themes instead of unpacking exactly what was going on. The conversation around Shyamalan often focuses on his final scenes, and I found the ones in “Old” some of his most frustrating given how they feel oppositional to what works best about the movie. When his characters are literally trying to escape the passage of time, as people do when their kids are growing up too fast or they receive a mortality diagnosis, “Old” is fascinating and entertaining. It’s just too bad that it doesn’t age into its potential. 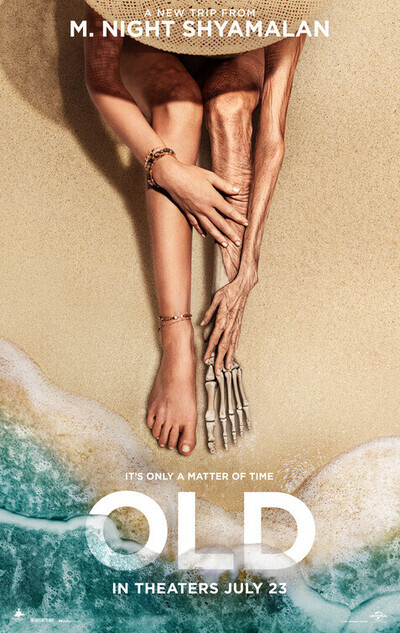 Writer (based on the graphic novel "Sandcastle" by)