Tim Blake Nelson, whose performance in the title role of this second fiction feature by director Potsy Ponciroli is its most stellar attribute, has the most convincingly exhausted and forlorn hangdog expression in contemporary cinema. And he puts it to undeniably superb use in the early portions of this movie.

He’s heard before he is seen, telling the viewer of his origins: New York born, he spent time Kansas, Arizona and New Mexico; the movie’s setting, 1906, finds him in the territory of Oklahoma, farming. As he works the land, Henry’s son Wyatt, bored with his tasks, complains “I still don’t believe this is the life you wanted ... up at dawn, feeding the stock.” Henry insists to Wyatt (a very good Gavin Lewis) that “there are worse arrangements.”

His prior narration had hinted that Henry has some familiarity with worse arrangements. Over a shot of the burial ground of his obviously beloved wife, he says of his various ventures over the years that “some were more marginal than others.”

Like William Munny in Clint Eastwood’s classic “Unforgiven,” Henry hasn't outrun his past so much as sent it off stage. It’s not entirely departed from his life, but rather stands ready in the wings.

Soon Henry will have cause to let a man his son doesn’t know take center stage. We’ve seen, in the movie’s tight, menacing opening, Stephen Dorff as Ketchum, with a couple of equally ruthless companions, pump a hapless man of the grasslands for information, then strangle the life out of him. A little later, Henry, who’s got no neighbors except his stalwart, deep-voiced brother-in-law Al (country singer Trace Atkins, who’s terrific with the basso stoicism) comes upon an untended horse, blood on its saddle. A little farther off, there’s a man with a bullet in his shoulder, a revolver, and a bag of money. Henry will bring the man back to the house and look after him. As for the bag of money, he gazes at it for a while before saying “Nope.”

Then he changes his mind and scoops it up.

Well, you know where this might be going, and sure enough, it does. The shot man, Curry, has one story, and when Ketchum and his men show up, they have another. Additionally, Curry (Scott Haze), when he’s not passing out from loss of blood, has flashbacks to a time when he and Henry may have met.

Preparing to confront the men posing as law—who are in fact just rank killers—Henry frequently steps on Wyatt’s offers to help with the impending shootout. Wyatt’s pretty handy at target practice, but when it comes to killing a man, Henry tells him, that’s a different line to cross (and here we arrive at "Unforgiven" again). This works Wyatt’s nerves to the extent that he lashes out, calling Henry “a stupid worthless old man.”

This bruises Henry’s feelings. But in Nelson’s deep, still characterization, you see that the hurt means nothing next to his determination to protect his only son.

Eventually—about the time it demonstrates Henry’s expertise as a killer of men, in several well-done action mini-sequences—we learn the details of Henry’s past, and your overall enjoyment of the movie may hinge on whether or not you’re willing to, as they say, go with it. I did a slight eyeroll myself and then settled back into the substantial satisfactions offered by the movie’s climax. And continued my admiration of Nelson, who never puts a foot wrong, pulling off Henry’s transformation from hangdog to deadeye with palpable conviction and credibility. 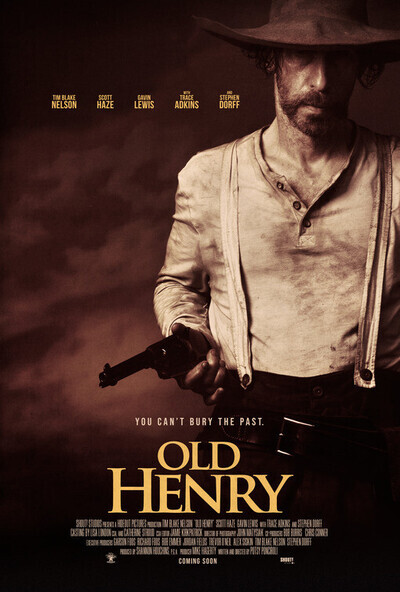