This sensitive, competently crafted indie picture—a genuinely regional film, it would appear, shot in Ohio and set up through a production company based in Grand Rapids, Michigan—is a romance that’s aiming to play David against this week’s ostensible date-movie Goliath, the considerably not hearts-and-flowers-redolent “Fifty Shades Of Grey.” Written, directed by, and starring Rik Swartzwelder, “Old Fashioned” kind of wears its premise on its title. Spunky sweet, and smart Amber (Elizabeth Roberts) runs out of gas in the middle of a picture-perfect town in which Clay (Swartzwelder) hones various crafts at an antique store called, yep, “Old Fashioned.” Amber’s resolve, such as it was, was to drive until she ran out of gas and set up housekeeping wherever that happened to be. Clay helps her set up in a new quaintly furnished apartment but won’t go through the screen door outside. He has made a vow, he tells Amber: he won’t be alone in a room with a woman who isn’t his wife. Amber finds this odd. She finds it odder when she learns he’s not married.

Clay’s back-story is revealed in dribs and drabs: this is not quite “The 40-Year-Old Virgin” played straight. The hero was not just a collegiate ladies’ man but a bit of a Joe Francis type as well, producing salacious videos. Then he changed. “You found Jesus?” Amber asks him. “More like…he found me,” Clay responds.

So, yes, this “Fifty Shades”-counter-programming isn’t kidding around about being counter-programming. But I would not necessarily characterize this effort as a “Christian movie,” not that there’s anything wrong with that. Swartzwelder does a very thorough and not unbalanced job of portraying Christian characters trying to function in a social milieu that discourages values such as chastity, modesty, and so on. The movie tries hard not to be overtly prudish about its point of view, and in many respects it succeeds—I didn’t even notice until after it was over that it had no swearing in its dialogue. Once Clay explains his chaste theory of courtship to Amber, and Amber agrees to make a go of it, “Old Fashioned” also has no problem owning up to the fact that Clay’s quest to be “a decent person” is in fact more than a little dogmatic. He’s depicted as defensive and even a little hostile in terms of the ways he stands up for his beliefs. Amber’s more conventionally “free-spirited,” but within that context she’s got more sense than Clay, as does Clay’s adorable wise aunt Zella (Dorothy Silver). Near the climax of the picture, when Amber and Clay argue about the idea of forgiveness, Clay sniffs “You make it sound so easy,” and Amber shoots him down good with “You make it sound impossible.” It’s incredibly rare to see an American movie with a Christian perspective that’s more invested in philosophizing and empathizing than in eschatological pandering, and for that alone “Old Fashioned” deserves commendation. The movie’s also very well acted and beautifully shot.

However, Swartzwelder does tend to lay things on a little thick. There’s a scene in which a character gets a poster for the Frank Capra film “Meet John Doe” as a present, which is all well and good, but then the viewer is subjected to a reprise of Gary Cooper’s climactic speech at the end of the film along with a few sensitive dissolves of small-town-America imagery. One of the jarring voices of modernity is a local radio DJ whose show apparently consists entirely of misogynist rants; you know, most local radio stations, even the most talk-oriented, do provide weather reports every now and then. I mentioned the cinematography before; it’s by David George, and it’s lovely, but every now and again Swartzwelder and his editors string together several of said images for interludes that could be characterized as “Malick-lite.” This speaks, finally, to the movie’s most substantial flaw, which is that with respect to pacing, Swartzwelder, going for “thoughtful,” instead achieves “glacial.” A romance wants to sweep viewers up, not bog them down. Still, “Old Fashioned” is both unusual and intelligent enough that, despite it not being entirely MY cup of tea, I’m hoping that it’ll succeed at doing at least a little more than addressing the converted. 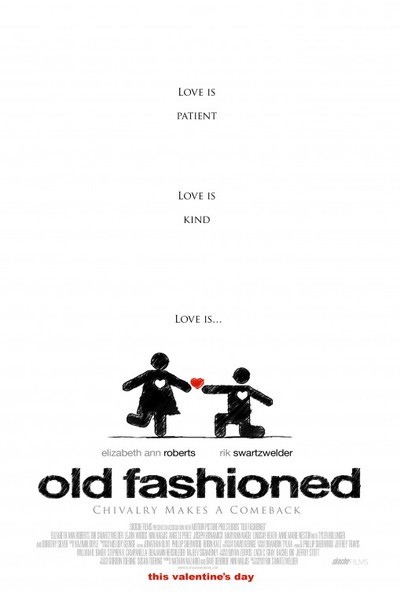