I don’t, as a rule, tend to associate kid’s anime with teachable moments. Not to say that it (in my experience) encourages bad behavior (although you might argue that some adult-oriented anime does just that); it’s just that its priorities generally tilt toward whimsy, excitement, and sentimentality more than pedagogy. For lessons along the lines of, say, “Ohana means family,” you go to the States, even if it is as eastward-drifting a state as Hawaii.

So I found the overt believe-in-yourself-so-you-may-better-serve-others messaging of “Okko’s Inn,” the feature debut from director Kitarô Kôsaka, a little surprising but not unpleasing. Adapted from a series of children’s novels by Hiroko Reiji, this fleet, incident-packed feature begins before the orphaning that puts the title character into the care of her grandmother, who entrusts the girl with certain duties running her inn.

Instead, we’re at the spa with Okko and her perfect parents, who inform her that the spa’s warm waters have healing properties. Driving home from the place, there’s a terrible accident on the road, depicted with a dynamism that recalls “Laputa”-era Miyazaki. (This is no coincidence: Kôsaka worked in Miyazaki’s animation department as Studio Ghibli for many years before striking out on his own.) Okko loses her parents but gets a first glimpse at a future friend.

At her grandmother’s inn, Okko is put off by the bugs and lizards, harmless of course, that seem to have the run of the place. She is even more disconcerted by the ghost she meets. He’s the incarnation of a kid many years dead. And a nerdy one at that—he’s picking his ectoplasmic nose when she sees him the second time (the first was at the accident). “A ghost’s snot can never be dirty,” he protests after she refuses his phantom handshake.

How long has Uribo been gone? Well, as a corporeal being, he had a childhood crush on Okko’s grandma. The scenes in which the living family members go through a scrapbook are poignant.

As the movie continues, Uribo, along with a winsome female ghost, help Okko conquer her fears and resentments as she uncomfortably adjusts to the role of auxiliary innkeeper. She is taught how to constructively swallow her pride and ask for help when she needs it. That’s especially tough when it comes to a girl from a rival inn whom Okko has nicknamed “Frilly Pink.”

And finally, Okko has to learn how to get along without her ghosts. Seems like a lot of learning, but the narrative fits it in so organically, and the characters and action are so lively and colorful, that the medicine goes down as if it’s been spun entirely of sweet stuff. 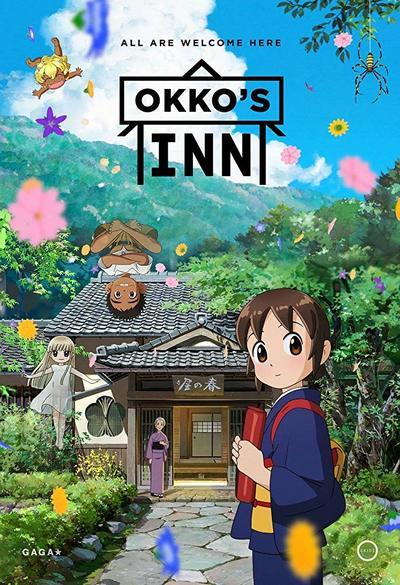