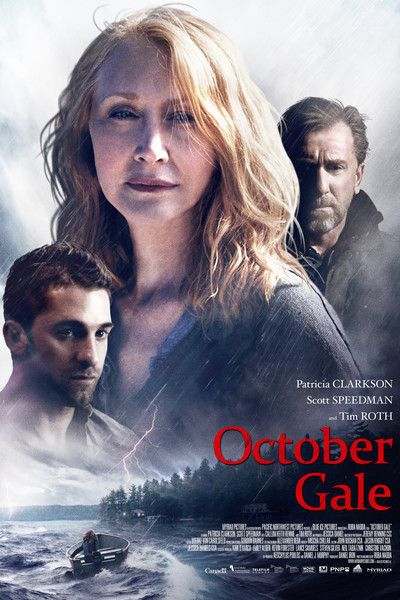 A confession: I could watch Patricia Clarkson do just about anything. Brush her teeth, run on a treadmill, eat a hot dog. Doesn’t matter. She is just one of those actresses who is always fascinating to observe, even when the movie she appears in isn’t. What this sublime performer can achieve simply with subtle shifts of her facial expressions—especially that Mona Lisa smile usually rimmed with luscious crimson—is the equal of a Shakespearean soliloquy.

So be glad that for about 20 or so precious minutes early on in “October Gale,” Clarkson’s ultimately disappointing reunion with “Cairo Time” filmmaker Ruba Nadda, we are privileged to have this talented woman all to ourselves.

The best parts of this tepid thriller, which seems designed to actually lower audience’s heart rates, arrive before the plot kicks in. That is when Toronto doctor Helen returns to a cozy family cabin on a picturesque remote island to face the misty watercolor memories of her loving husband of 32 years, who died the year before. She is tasked with reawakening the vacation retreat that appears to have been frozen in time.

As Helen silently goes about disposing of the detritus of their final moments together, certain objects such as articles of tossed-aside clothing, scattered photos and old newspapers spark gauzy flashback interludes that are quite lovely to witness. What results is a graceful portrait of quiet grieving, and Clarkson turns it into a small masterpiece.

But then Helen’s motorboat, her main mode of transportation to the mainland, conks out. And, as we gather from scenes of her waving her cell phone in the air, she is also without a means of communication. Naturally, a violent rainstorm begins to brew.

Regretfully, we will soon have to share her with a mysterious bleeding stranger who washes ashore and stumbles into her home before passing out. While the physician dutifully tends to the bullet wound in his shoulder, she also is nervous about having a younger man lurking about who someone obviously wanted to kill.

However, that Will, as he is known, is played by Ben from “Felicity”—namely, Scott Speedman—pretty much guarantees that A) he is relatively benign and B) this handsome, well-mannered guy might summon more than just maternal feelings in Helen. Trust is indeed an issue at first but nothing that a few shared cups of coffee, a friendly game of cribbage and the fact that he returns her kindness by preventing her from drowning can’t fix.

Reality, however, comes a-knocking when a local handyman pays an unexpected visit and, after figuring out that Helen is not alone, he suddenly races off. Seems that he is in cahoots with whoever wants to dispose of Will and will likely return soon.

With “Cairo Time,” which also found Clarkson drawn to a stranger, Nadda created an intoxicating atmosphere where the heat of the Egyptian environs and the attraction between two culturally divided people seemed to radiate from the screen. The Canadian writer/director knows how to generate believable connections between characters, as shown by the emotional bonding agent in the form of past regrets that is shared by Helen and Will.

But when it comes to building suspense, Nadda is never going to be known as the next Hitchcock. The first warning signs arrive when “October Gale” stoops to old-fashioned “dark and stormy night” theatrics—lightning, thunder, high winds and shaky pine branches. But save for a few bouts of scowling and a smattering of tattoos on his torso, Speedman’s Will never seems to be a real threat to Clarkson’s Helen. Certainly, she drops her guard rather quickly. And when danger does arrive in the form of Will’s pursuer (Tim Roth, almost always a human warning sign), the action scenes are rather clumsily handled and edited.

Worse, there is an awkwardly inserted flashback besides those experienced by Helen that clearly is there only to clumsily explain an important story point. Nadda has proven herself to be an impressive storyteller in the past but she is way outside of her comfort zone here. You either have the genre gene or you don’t. But at least she provides some room for Clarkson to show her stuff before she is reduced to taking aim at bad guys in the darkened woods. By that point, though, any potential value in “October Gale” ends up being gone with the wind.