Obama: In Pursuit of a More Perfect Union

Former president Barack Obama is not interviewed during the five hours of Peter Kunhardt’s HBO docuseries “Obama: In Pursuit of a More Perfect Union.” The two-term president is instead shown speaking from the past: in old news features, from behind a podium, or at a barbershop, ragging on a constituent’s shoes. But this documentary is not about Obama explaining himself, and in its best passages, it is not about overtly praising him. Rather, it’s about analyzing his essential strategy in becoming a symbol as the first Black president, knowingly having to carry the conversation of race to each campaign stop, and then to the White House. Be not bored by the docuseries’ gummy title; “Obama: In Pursuit of a More Perfect Union” is a comprehensive and compelling analysis about a particularly vital aspect of Obama’s legacy.

Included in this documentary are the many large building blocks from his crystallization as a Black icon (racist birther madness; "Key & Peele"'s Obama anger translator; a terrible attempt by the New Yorker at right-wing parody, "terrorist fist jabs," it's all here). In many ways, it’s like the narrative, chronological companion to what Ta-Nehisi Coates wrote about in his Obama essays for The Atlantic, which later was collected in the indispensable book We Were Eight Years in Power. Coates appears in the documentary, along with other heavyweights like Cornel West, Jelani Cobb, the Reverend Al Sharpton, the late Representative John Lewis, and more. Like Coates’ book, Kunhardt’s film brightly illuminates how essential the discussion of Obama’s handling of race is to American culture as a whole, especially when it was no accident that every president before him was a white man.

Kunhardt breaks the story into three feature-length parts, but makes sure that we first recognize Barack Obama as a former kid from Hawaii, who then became an activist in college, studied at Harvard Law, and began a political career in Chicago. In 100 minutes, he vividly colors the Obama origin story with different life chapters, while providing a tangible sense of how someone like him would eventually run for president. Like the best of celebrity memoirs (Steve Martin’s Born Standing Up comes to mind), “Obama” always keeps visible the tether that connects the future president to his original communities, his family, his hard work. The investment of this documentary in being so detailed with backstory pays off huge, in that you don’t simply see President Obama when he speaks on the 2008 campaign trail, but a smart college kid whose audience just got bigger and bigger. Even more so, you don’t see a symbol, but a man who constantly navigated issues of identity in the public eye.

This first part also plants the ideas that will repeat throughout Obama's ascendancy—his having to face numerous cringe-worthy questions from white reporters about his Blackness, or ingratiating himself to the Black community while not alienating white voters. Kunhardt’s docuseries presents this history in a fashion as current as standing on a tightrope. The disastrous moments, like his administration throwing Shirley Sherrod under the bus for a viral video that was doctored to be simply inflammatory, especially highlight the flawed work Obama took on. Kunhardt's docuseries also gives a space to people like Sherrod, or Obama’s former paster Jeremiah Wright (who suffered a similar treatment from right-wing editing), to give their side of the story, even if it does not always make Obama look good.

The series truly hits its groove in part two, in that it nails what this documentary is very good at, and applies it to Obama's historic and tense 2008 campaign. “Obama” is best as its own extensive critical essay, one that goes through different moments with commentator analysis; there’s an intellectual thrill in retracing specific moments of the campaign related to race, like how Obama's words of unity softened the existence of white privilege, only for Cornel West to succinctly point out why it was so wrong. It is thrilling too, to see the countless Americans inspired by him, empowered by his words and dedication.

And what this talking-head, retrospective docuseries lacks in style, it largely makes up for with abundant ideas and focused pacing, touching upon major moves in the campaign, one after another. They ring here even more like demographic-focused strategy (like when certain Obama family members are mentioned during the campaign), but the documentary provides necessary layers and overall context. It also makes one further appreciate Obama's public endurance and composure in the face of racism in its many forms and volumes. It is unquestionable when Obama administration senior advisor Valerie Jarrett describes him as “a still water that runs deep.”

“Obama: In Pursuit of a More Perfect Union” flags a bit in its third and final part, in which each presidential term is given approximately an hour. The lens of race is applied, but the same analytical eye behind it, which truly gives the doc its purpose, weakens. In presenting the second term, Kunhardt retraces the grave events of the murder of Trayvon Martin, or the shooting at the Charleston Church in South Carolina, but gears its ideas toward recognizing his emotional openness, and his empathy. (A passage about the terrible massacre at Sandy Hook is painful, and seems unnecessary.) Obama's compassion and willingness to shed a tear at the podium is a colossal trait, but in this docuseries’ analysis they play out like flat arguments as to why we should like Obama.

There should be more documentaries about presidencies like "Obama: In Pursuit of a More Perfect Union," though I'm certain not many others could (mostly) justify a similar running time. Kunhardt's docuseries is of a school of thought we need more from, that criticism can enrich one's honest appreciation of a political figure, and that a total, unquestioning allegiance creates a false relationship. Actual patriotism thrives with this nuance; so too does documentary filmmaking. 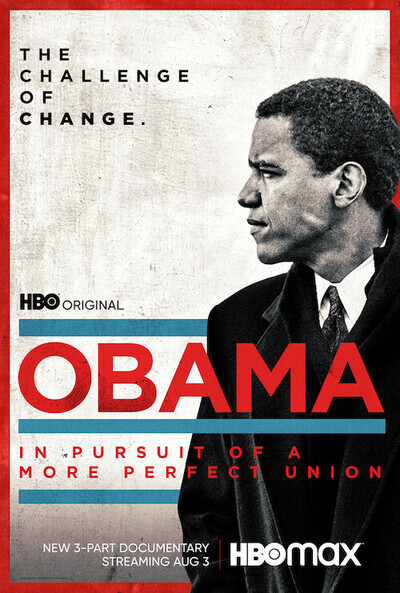