In Buster Keaton's 1922 film "Cops," Keaton, for reasons too complicated to go into, finds himself sitting in a cart full of furniture, trying to get his horse to move faster. Keaton makes a pit-stop at a "Goat Gland Specialist," and hustles the horse through the door. Moments later, standing on the sidewalk, he looks around furtively, making sure no one is watching, and turns and strolls into the specialist's office himself. That scene would have killed in 1922, but perhaps modern audiences need back-story. Penny Lane's wonderfully entertaining documentary "Nuts!" may provide, among other things, enlightenment on what Buster Keaton (and his sluggish horse) might have been looking for through that doorway.

"Nuts!" presents the life-story of a man named John R. Brinkley, whose fame spread far and wide in the 1920s and 1930s. Apparently, one day a farmer visited Brinkley's druggist's shop in Milford, Kansas (population 300), and asked for help because he was a "flat tire" sexually, Dr. Brinkley got the idea of removing "good nuts" from billy-goats and inserting them into the "bad nuts" of impotent men. Brinkley experimented, and it worked! The farmer had a spring in his step again, happy erections, and potent sperm filled with child-bearing potential. And so began the heyday of Dr. Brinkley. Brinkley opened a hospital, a herd of virile goats chewing grass on the lawn in front. Milford became a boom town, people traveling from across the country to have the goat gland procedure. Children were born to couples who had given up. Men could satisfy their wives again with their sexual performance. Miracle!

Penny Lane's previous film, "Our Nixon," took a well-known story and viewed it from an unexpected perspective, using the intimate humorous "home" movies made by the Praetorian Guard around President Nixon in the first years of the administration. Lane has a gift for finding the unexpected in the familiar, the right narrative structure, however eccentric, to tell a story.

Her documentaries are not your typical "talking head" affairs. "Nuts!" utilizes only a couple "talking heads," each with their own area of expertise. James Reardon shares his knowledge of the history of Kansas, its demographics and politics (Brinkley, a famous man, eventually ran for office). Megan Seaholm, a medical historian, delves into the history of the AMA and its campaign against "quackery." Gene Fowler is radio historian (Brinkley's main contribution to the world may have nothing to do with goat glands but his pioneering use of radio technology.)

The most striking part of "Nuts!" is its extensive use of animation. Multiple animators were on the team. At first the animation consists of greys and faded ivories and watercolor-smudged blacks, perfect for portraying the dawning decades of the new century. As the years go by, color starts to flash into it (one man's electric-blue suit stark against the faceless mass of black-shadowed people behind him). The animation is abstract, sometimes nightmarish, and often very funny. Its imagery is like a sophisticated graphic novel. Accompanying the animation is the superb voice-over work done by Andy Boswell, John Causby, Kelly Mizell, Jeff Pillars, Thom Stylinski and Fran Taylor. They play a cast of hundreds, each voice distinct, the language often direct quotes from the public record (one farmer testifies at a hearing, bluntly, unashamed: "I used to have a floppy dong, but it ain't floppy no more.") Current animated films use name actors for all of the voices, and many of them do wonderful work, but sometimes what you need are practiced mimics, chameleons, funny-voice experts. These voiceover artists are convincing as uneducated farmers, prudish old ladies, sinister politicians, snooty doctors, and whispering crowds of scandalized people.

There are surprises along the way, bombshells even, events that made front-page news across the country at the time. Brinkley is presented as a plucky pioneer, solving people's sexual ills and using his popular radio show to educate his listeners about sex (Fowler, the radio historian, calls Brinkley the "Dr. Ruth Westheimer of the 1920s"). But there's more to it, and Lane dispenses it in fragments so that it feels like you're reading along with the newspapers of the day. Lane has tracked down extensive home movie and newsreel footage, as well as snippets of Brinkley's various radio addresses. Brinkley was a man who understood publicity and the power of personality. So there's footage of Brinkley in his garden, Brinkley and his wife and child lounging by a pool, Brinkley and his son catching fish, the Brinkley family boarding their private plane (purchased from Charles Lindbergh).

There are multiple relevant critiques in the content, should you be looking for them. There were debates about health care during those decades, about the population wanting the right to choose their own doctors. Medicine used to be mostly guess-work, doctors using leeches, purges, enemas, on ailing people, the cures often more deadly than the illness itself. Once doctors started consolidating themselves into associations, the independents were run out of town on a rail. Sharing knowledge and peer review became mandatory. Dr. Morris Fishbein fought with evangelical fanaticism to eradicate "quacks," his main target being Brinkley. "It's not medicine Dr. Brinkley is practicing," thundered Fishbein. "It's big business!" Fishbein, incidentally, was excellent friends with H.L. Mencken, the cranky "sage of Baltimore," who wrote essay after essay throughout the 1920s, attacking "quackery" and snake-oil salesmen and "herbalists," stating in no uncertain terms:

"What is needed is a scientific inquiry into the matter, under rigid test conditions, by a committee of men learned in the architecture and plumbing of the body, and of a high and incorruptible sagacity."

Quackery or no, there's a reason audiences in 1922 would have been rolling in the aisles seeing Buster Keaton slip furtively through that goat gland door. Lane helps us understand why. 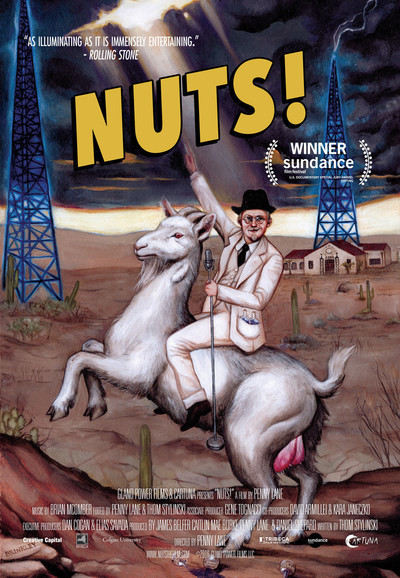 Gene Tognacci as The Narrator

Pope Brok as Himself

Gene Fowler as Himself

Dr. James Reardon as Himself

Megan Seaholm as Herself