Early in "Our Nixon", Penny Lane's CNN documentary about the only U.S. president to resign in disgrace, a witness describes the scandal-plagued administration as "a brilliantly lighted, badly run television show." Lane seems to have taken that quote as artistic inspiration of sorts. Her nonfiction look at Richard Milhous Nixon's rise and fall often plays like a mortifying companion to the Nixon-period sitcom "The Wonder Years." The movie stitches bits of video and audio into an collage that turns the president and his staff into a cast of tragic-comic bumblers whose paranoia and vindictiveness bring about their downfall. It even starts with a roll call of major players ("RICHARD NIXON AS THE PRESIDENT", "DOMESTIC AFFAIR ADVISOR JOHN ERLICHMAN") scored to, of all things, the Tracy Ullman cover version of "They Don't Know About Us." Brace yourself for a very special episode.

This is, to put it mildly, not your typical, information-delivery documentary. If you don't go into "Our Nixon" knowing a bit about Nixon, his policies, his temperament, his staff, his enemies, and the details of the Watergate break-in and coverup, you won't gain a clear picture of what happened without consulting outside other sources. That seems to be OK with Lane, who told RogerEbert.com that she wanted to present "modest little sliver of a big story we all know already."

On that count, "Our Nixon" is a success—even though its style is not as strikingly original as advance publicity suggested, and there are points where, even though it's striving to be a Rorschach test, you can sense the filmmakers juxtaposing images, sounds and (sometimes too-cutesy) pop tunes to suggest what certain inkblots represent, and how we ought to feel about them. Treating never-before seen home movies by Nixon White House insiders as a visual spine for its tale, parts of the movie have the urgent but quirky rhythms of a Michael Moore or Oliver Stone montage; other stretches are reminiscent of "The Agony and Ecstasy of Phil Spector," the little-seen but critically acclaimed 2009 Vikram Jayanti documentary that scored interviews and trial footage with Wall of Sound tunes.

"Our Nixon" seems to be more interested in evoking emotional than intellectual responses. It draws our attention away from the big picture and refocuses it on the main players' personalities, and on the Watergate era's perverse, dread-soaked atmosphere. Its best quality is its willingness to paint its key players as people, not villains or types. Rather than excuse or soft-pedal their bad deeds, this approach makes them seem more comprehensible and real—like people we might know, but with power.

At one point we see Nixon aide H.R. Haldeman confessing to interviewer Mike Wallace that they should have destroyed the secret tapes that ultimately incriminated the major players in the Watergate break-in, which makes Haldeman seem like a coldblooded political fixer (which by most accounts he was). Then a few minutes later there's a sequence pairing blurry, jerky Super 8mm footage of White House interiors with audio of Nixon and Haldeman on the phone after Nixon delivered his landmark "Silent Majority" speech, which sided with supposedly "regular" Americans against Vietnam war protesters and hippies, and sowed the seeds for the modern-day Republican party's rich-dude-loves-Joe Lunchpail facade. Nixon, who was dogged throughout his life by gripes that he was smarmy, opportunistic and awkward, comes on like an actor nervously asking his agent to read reviews of his latest performance. Haldeman, no dummy, only reads from the good ones. You can sense Nixon's desire to be loved for qualities he never had, and never would have. "It was done with style," Haldeman says of the speech, even though we know it's not true, and that the speech's lack of style was part of the reason the Silent Majority liked it. If it had been more artful or impassioned, viewers would have wondered who this man was on their TV screen, and what he'd done with the real Nixon.

There are news clips, bits of old TV interviews with Nixon and his staffers, and snippets of secret White House recordings, some of which dedicated Nixonologists may have encountered elsewhere; but the total package feels fresh, at times unsettling. You can't be entirely sure why Lane and her editors are fixating on certain details of Nixon's character and career and ignoring others, but this is ultimately more compelling than irritating, because it lends the movie a mysteriousness that most documentaries lack.

"Our Nixon" charts changing times and generational attitudes simply by showing us particular moments. Introducing the milquetoast Ray Coniff singers at a 1972 dinner to celebrate the fiftieth anniversary of Reader's Digest, Nixon defensively boasts, "If the music is square, it's because I like it square." To Nixon's horror, one of the Coniff singers prefaces the performance by holding up a "Stop the Killing" sign, proclaiming solidarity with the antiwar movement and Pentagon papers leaker Daniel Ellsberg, and chiding the president as a bad Christian for not pulling out of Vietnam. "If Jesus Christ were here tonight," she says, "you would never dare drop another bomb." It's amazing that the group could go on to sing its songs after sucking the air from the room. In 1972, even young people who seemed square were rebelling. Nixon couldn't win. 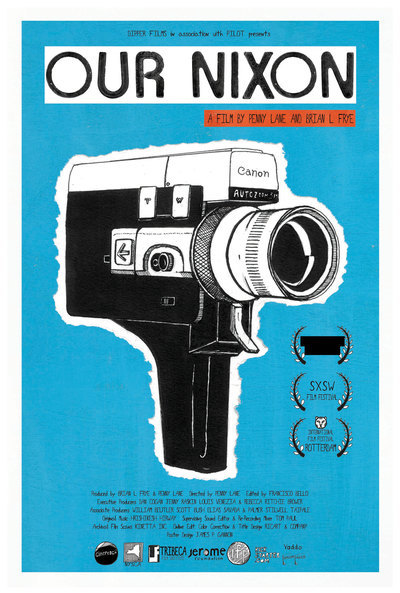 Richard Nixon as Himself

John Ehrlichman as Himself

Harry Robbins Haldeman as Himself

Dwight L. Chapin as Himself

Lawrence Higby as Himself

Pat Nixon as Herself

Daniel Ellsberg as Himself

Mao Zedong as Himself

George McGovern as Himself