Back when I was a whelp in my early twenties, cruising through life with naught but my pleasure in my windshield, my rearview, and both side mirrors, the diamond concern De Beers concocted an ingenious, some would even say diabolical, marketing campaign, strongly suggesting to the bachelors of Europe and America that when preparing to pop the heteronormative question, the fellas spend two month’s salary on the engagement ring they intended to offer. That really blew my mind, especially given that I lived much like the guy in that Sam Cooke song “Another Saturday Night”—the only times I had any money coincided with those occasions on which I had “just got paid.” The very idea of putting aside that kind of jack (as I honest to God once heard Billy Bush call cash) was utterly beyond me. Didn’t matter if they meant gross or net, because at the time I didn’t know the difference between the two anyway.

Apparently, in recent years the “suggestion” has gone up to three months’ salary, and holy cow. The amazing thing is that this, like so much else in the consumerist world, is pretty much a trick. And it's only one part of the mythmaking that’s earned untold billions for De Beers and some others (although not many others).

As jewelry designer Aja Raden puts it in the new documentary “Nothing Lasts Forever,” the diamond industry “created an illusion so spectacular it turned into truth.” The film, directed by Jason Kohn (“Manda Bala” and “Love Means Zero”), turns the slogan “a diamond is forever” on its head with its title. This is not about the durability of a diamond itself, but about the diamond market, which is being roiled by the high volume, and high quality, of synthetic diamonds.

The opening interview subject, Martin Rapaport, a leading figure in the reporting of diamond pricing, argues that there ain’t nothing like the real thing. He tells a tale of his mother giving him five thousand dollars in cash, and his wondering how to spend it. His mother tells him it’s not to spend—it’s just that when you’re carrying something of great worth, you carry yourself differently, with more confidence. And so it is with diamonds, he says.

The movie doesn’t spend much time on the back-breaking, frequently exploitative work required to mine actual diamonds. Instead, it pivots to Raden, who argues that “the idea of ‘is it real?’ or ‘isn’t it real’ is absurd.” And then regales us with tales of how De Beers pretty much invented the engagement ring out of dubious histories as a way to use smaller stones that nobody wanted before this innovation. She also expresses amazement that a De Beers rep agreed to be interviewed for the film—a sign of “weakness” for the once monolithic entity.

That representative, Stephen Lussier, who married into the family that founded De Beers, is urbane, gregarious, unfailingly unabrasive, and a great storyteller who lives to perpetuate the myth even as his company moves into synthetics as a survival strategy. If these two figures are long-distance opponents, the other interviewees are searchers—one gemologist is peddling a machine to distinguish real stones from manufactured ones, only to be upended by the big money concerns, while a manufacturer of synthetics grows indignant when speaking of Big Diamond trying to get into what he sees as his business. It’s pretty fascinating stuff, even if, like me, you no longer have a dog in the fight, so to speak. (I eventually, and with pleasure, got my engagement ring buying completed well out of my twenties but well before synthetics got into the mix, and whatever tips I might have for you probably no longer apply anyway.) 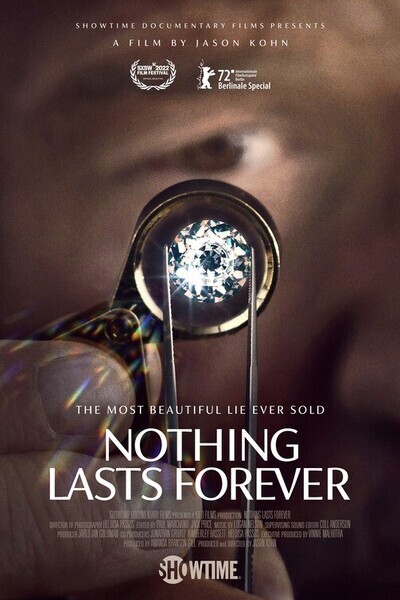