Norm of the North

One wishes "Norm of the North" had a blatant or even a subversive political message, if only because it might start an argument about the ways in which "Hollywood is trying to indoctrinate our kids with liberal propaganda about climate change." That could be fun.

Hell, it would be fine if this movie took the opposite route, pushing back against those "liberal Hollywood indoctrination tactics" by giving us a movie that shows the actions of humankind having absolutely no negative effects on the natural world. Either way, some people would get angry about what the movie is saying—or, if one wants to put it in terms of the modern knee-jerk reactionary approach to political discourse, what the movie is pushing on our children.

Surely, some folks will still find a reason to be mad about "Norm of the North," which is either too lazy or too worried about offending to take any sort of stance. Some will point out that an evil real-estate magnate is named "Greene," and they might cry, "The movie is suggesting that sustainable-energy efforts are doing more harm than good." Others might point to a throwaway joke in which the evil mogul says that his company's popularity is "rising faster than ocean levels," and they might whine, "The movie is saying that man-made climate change is a fact and is having destructive consequences" (before complaining about the villain being a businessman in the first place).

For once, I almost envy these people. It must be nice to have such strong, go-to emotional reactions to anything that even slightly veers toward the political, even in the case of a movie as dull and intentionally uncommitted to any cause as this one. Maybe, though, we could take this singular instance to come together, join hands and proclaim that this movie's badness has nothing to do with politics—that its negative impact on kids has nothing to do with agenda-pushing.

This is a bland, nearly incompetent animated movie that assumes kids can only be entertained by the sights of a dancing polar bear, of "cute and marketable" lemmings (the movie's own description) urinating in an aquarium, and of a bird defecating on people. Can we all agree that children are much smarter than this material believes them to be? Can we all unite under the banner of rejecting movies aimed at kids that push the lowest common denominator of humor because they figure children just need a brightly-colored distraction for 90 minutes? Is that enough of a big-picture issue on which people in any region of the political spectrum can agree?

The story is about Norm (voice of Rob Schneider), a polar bear who can talk to humans and who would rather dance than hunt. He discovers a model housing unit in his icy, Arctic home. To save the region from any potential buyers, he sabotages a commercial shoot organized by Vera (voice of Heather Graham), the head of marketing for Greene Homes, who later starts to have doubts about the project. Norm then stows away in the house on its journey back to New York City in order to stop Mr. Greene (voice of Ken Jeong) from his plan to populate the Arctic with people.

Norm's plan is to pose as a method actor auditioning for Greene's advertising campaign to have "the Arctic sell the Arctic" (Greene instantly realizes Norm is not a man in a bear suit and then conveniently forgets about it). Greene also has captured the bear's grandfather (voice of Colm Meaney), so Norm also needs to rescue the old bear.

The quality of animation is—not to put too fine a point on it—rather schlocky. The blocky character designs appear rough, as if the artists simply threw a layer of textures on the first-draft geometrical models, and the physicality of those characters looks unfinished, as their jerky movements seem to skip a frame or three. (Think of the computer animation from a cinematic sequence in a video game from the 1990s, and that's about the level this is.) It's at least a good reminder that computer animation is not "easier" than its traditional, hand-drawn counterpart.

The look of the movie does complement its content, which is equally haphazard. "Norm of the North" doesn't care about the environment, the animals of the Arctic, or even kids for that matter. It wants to be "cute and marketable" as cheaply as possible. 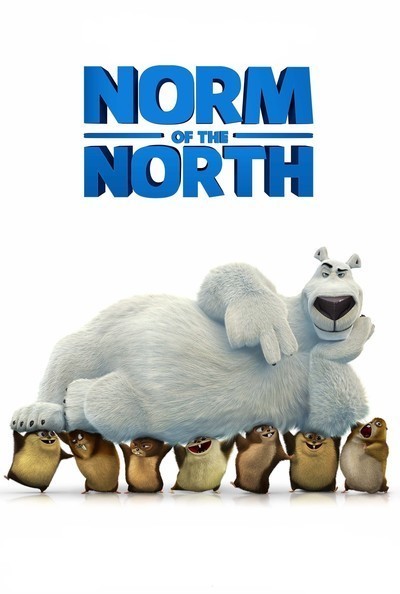