For their first live-action, original movie, Disney+ goes with what seems like a new Disney classic by default—a spunky, wholesome Christmas story with Anna Kendrick, Bill Hader, and a floating baby reindeer named Snowcone. “Noelle,” written and directed by Marc Lawrence, is a movie you can easily imagine watching on a video from a white shell case, or on the Disney Channel, and that’s a not-so-subliminal part of its appeal. But the big laughs and sweet moments in this movie—and there are many—show that "Noelle" has more going for it than just being one of the easiest ways for Disney+ to make a good first impression (along with a “Lady and the Tramp” remake, and "The Mandalorian").

“Noelle” imagines a North Pole where the role of Santa Claus is passed down to different generations of men in the Kringle family, meaning that the neurotic Nick (Bill Hader) is next in line, even though he doesn’t want the responsibility. In a funny Christmas simulation, he goes through the different training steps, like trying to land a sleigh on a rooftop, or guessing what a person wants just by looking at a picture of them. With Hader's sardonic quality making for a funny idea of a bad Santa, a more frustrating story arises to the surface—his sister Noelle (Anna Kendrick) is far more talented and ready for the gig, but was told by Santa, her father, that she’s meant to support her brother. Like the other women, including her mother (Julie Hagerty), Noelle doesn't protest, because men have always been Santa, and that's that. Lawrence juggles this institutional misogyny with establishing a candy-colored utopia; like “The Santa Clause” movies or even “Fred Claus” before it, he does some great world-building with delightfully silly dialogue (“Oh my garland!”) and fleeting visual jokes, as with a gavel that breaks when slammed, because it’s made from peppermint. It’s a strong establishment of context for the lovable but naive Noelle, and makes the movie all the more aware of itself—if it’s going to be cheesy, it might as well be clever, which “Noelle” often is.

The story then whisks Noelle, the wise elder Elf Polly (Shirley MacLaine) and eight reindeer to Arizona when Nick vanishes, with Noelle setting to find (the North Pole citizens blame her for his actions, natch), and convince him to come back. The adventure starts at an outdoor mall in Phoenix, where they park the sleigh, much to the amusement of the locals. It's another sunny environ of bright colors and stuff, but with distracting product placement and a general cheapness that seems to inspire lazily staged sequences and bad special effects. Luckily, this movie has a lead performance from Kendrick that makes the film count where it matters most, especially as Kendrick inches “Noelle” toward its larger story of smashing the Yuletide patriarchy because she has what Nick clearly does not—“the twinkle.” In one genuinely touching scene, she meets a deaf girl and her mother while looking for Nick in a shelter; Kendrick sells the sincerity in how Noelle is then surprised that her own hands suddenly know sign language (that twinkle effect), and she comes off as both a grounded person and a Santa you can root for.

Noelle receives some help from a private investigator named Jake (Kingsley Ben-Adir), who is going through his own frustrations about having his first Christmas as a divorced dad. He initially thinks that Noelle is as delusional like many others do, but agrees to take on a pursuit for Nick when he sees how sincerely she interacts with people, and his son Alex (Maceo Smedley). Noelle urges him to take up the Christmas morning invitation from his ex-wife, her new husband, and Alex. “Traditions change,” she poignantly advises him.

The closest that this G-rated movie gets to with a villain is Billy Eichner’s teach-savvy Gabe, Noelle’s cousin and another unqualified man handed the role of Santa after Nick vanishes. As someone whose rigid, data-driven approach to Christmas is like a kid’s version of a “Black Mirror” nightmare, he's an awkward killjoy, emphasis on "awkward." It’s always great to see Eichner outside of his brilliant impromptu interview series “Billy on the Street,” but he seems a little lost here.

Lawrence's script spares no scene, and wields a punchy sense of humor I wanted even more of. For example, you take the comedic pleasures of Hader when you can get them, so while he seems to have been involved solely for his dry neuroses persona, his line-readings can be very funny and ground this whole Santa business. But then other big names get short shrift, like Shirley MacLaine. She's mostly in the movie for cut-away, sassy comic relief; the way she coasts through Noelle's American adventure seems to be a big part of the joke.

Within the story's innocence, Kendrick is its most memorable ambassador, putting a shine to a character who is on-paper a grave case of arrested development. She has same spark as clear inspirations like Will Ferrell in “Elf” and Amy Adams in “Enchanted,” taking an earnest approach to childish fish-out-of-water gags like eating sunscreen, or thinking that the term is "yogurt pants." And when she has to share the screen's cuteness quotient with Snowcone, a CG reindeer that’s essentially a wiggly puppy with antlers, Kendrick can make it feel like an exciting piece of her world, as many Disney actors have done opposite SFX animals in the past.

But any time there's awkward green screen sleigh riding, or flatly executed scenes of more serious dialogue, "Noelle" looks like a chintzy TV movie with the cast of a considerably higher-budget theatrical release. More specifically, it clearly looks like after Disney moved “Noelle” from its main calendar to a Disney+, the budget got slashed drastically, and garish product placement was used to stitch everything together. Most Christmas movies are fairly tacky with how brands pop up, but “Noelle” has a grotesque amount, like each time a magazine cover is brandished, or when the mall setting provides a perfect shot of a store name, or when a joke ends with the repeated punchline "and an iPad." For a movie that wants to make Christmas about the spirit of giving, “Noelle” also has no problem in telling you what to gift.

"Noelle" is more about the victory lap in the third act, which layers its warm spirit with the touching image of a conservative community embracing that, yes, “traditions change.” It’s the kind of premise that you wish the movie had started from, but as a type of origins tale “Noelle” has plenty of charm—the kind that makes a Christmas story not just simply amiable, but worth a look. 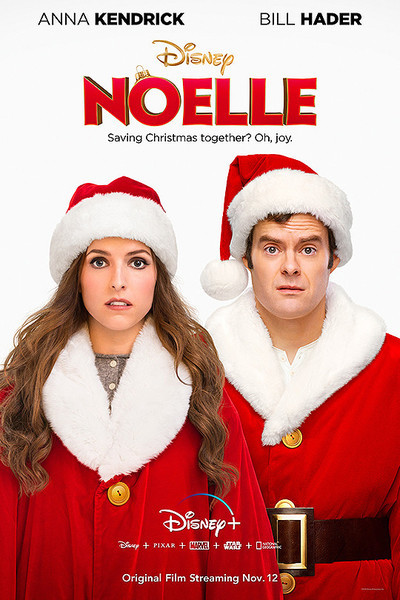