Nobody Speak: Trials of the Free Press

“Nobody Speak: Trials of the Free Press” tackles a number of fascinating subjects in its brief running time, including no less than the very concept of freedom of speech in an era when billionaires own everything. There’s so much going on here from the history of Hulk Hogan to the rise and fall of Gawker to the strange saga of Bubba the Love Sponge to the ascent of Trump in an era of #FakeNews to the purchase of a Las Vegas newspaper by a testy multi-billionaire who wanted to control it and so on and so on. If you’re thinking, “that’s enough material for like five or six documentaries,” you’re not wrong. There’s something almost admirable about trying to bite off this much for audiences to chew on, but it makes for a documentary that sometimes feels like it has ADD, jumping to another subject matter before tying up the first one, and sometimes failing to completely connect the two. It has the feel of a late-night conversation at a college party, full of good ideas but lacking focus.

“If you’re not pissing off a billionaire, then there’s not much point.” At its core, “Nobody Speak” is about pissed-off billionaires, namely Peter Thiel, Donald Trump, and Sheldon Adelson. The first half of the film focuses pretty intensely on the case of Hulk Hogan vs. Gawker Media. For years, Gawker was the enfant terrible of internet news, willing to publish what others would not. The heads of the website, including Nick Denton and A.J. Daulerio, speak of the lack of barriers that they faced in their particular brand of journalism—and, yes, it was journalism, whether you liked its tone or not. Across their networks, they broke several major stories, including the strange saga of Manti T’eo’s imaginary girlfriend, but they also made powerful enemies. That was part of the arrangement. They weren’t in it for friends or business relationships. And people noticed.

In 2012, someone contacted Gawker and claimed to have a video tape of Hulk Hogan having sex with the wife of his best friend, a radio personality known as Bubba the Love Sponge. Rumors of the tape had been circulating for some time, and when Gawker published a clip from it, no one could have predicted the internet landslide that would erupt from that decision. Despite having bragged about it on Howard Stern, Hogan claimed emotional distress, suing Gawker for a company-destroying amount of money for invading his privacy. Then things got really weird. One of the highlights of the film has to be how Hulk Hogan bragged about the video on Stern as a “personality” but Terry Bollea, Hogan’s real name, was tormented by the invasion of privacy in the video. Hearing Bollea speak about Hogan as if they’re not the same person is mindblowing, especially as testimony turns to how Hogan’s male member is bigger than Bollea’s. There’s a whole documentary there in how people separate in-ring or on-stage personalities and the people playing them, even when people like Hogan play them almost all the time.

That Knappenberger equates this kind of puffery with the half-truths and reality TV persona of Donald Trump makes sense, but it’s one of several places where the film seems to lose focus. The creators of this film take one of the craziest cases in recent memory and use it as a filter to address the state of journalism under Donald Trump. Again, it’s not that far a stretch, but it’s also a bit too much for one documentary to tackle the entire industry of journalism in the ‘10s. What likely happened was that the team set out to make a film about Hulk Hogan’s crazy case and then watched a similarly over-sized ego manipulate the media all the way to the White House—the temptation to intertwine the two was too much to dismiss even if the broader scope of the film now somehow seems to lessen its impact. Again, one could make an entire film (or two) about what’s happened to journalism in the last 18 months in which Gawker would be a tangent.

Still, there are important lessons to be learned from “Nobody Speak.” The most important may be that there are people who aren’t giving up. There are people willing to quit their jobs when they see impropriety in a field that demands moral backbone. When Gawker fell, I was dismayed at the number of people who cheered their fall, even after the incredibly disconcerting story of how that case was funded came to light. What happened to Gawker cannot become the norm. We can’t allow pissed-off billionaires to dictate who does and who does not write about them. If we do, journalism is dead, and the title of this film will prove prophetic. 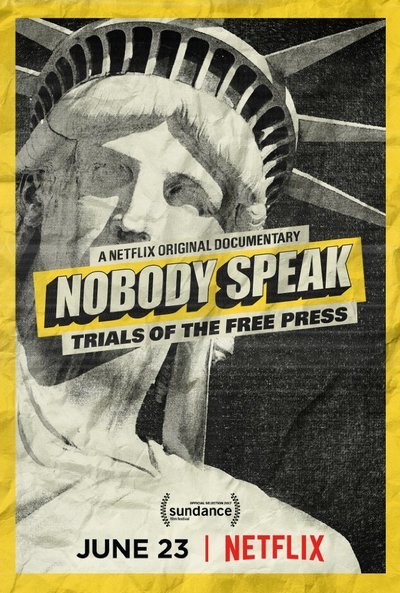