“Nobody Knows I’m Here” tells the story of Memo (Jorge Garcia), a recluse hiding out with his uncle Braulio (Luis Gnecco) in a remote part of Chile. Memo likes breaking into people’s houses for reasons unexplained, and would appear to be on the autism spectrum though a line of dialogue negates that. He helps his uncle tend sheep while refusing any attempt to attend public events or be sociable. He barely even speaks to Braulio, who chides him about his anti-social behavior and penchant for breaking and entering. At night, Memo occasionally dresses in the flashy outfits he makes and performs for an audience of one. Despite all these details, Memo remains something of an enigma for most of this Netflix release’s runtime.

Of course, the reason for all this mystery is that Memo has a deep, dark secret. It’s also a dull secret that will evoke memories of Milli Vanilli to anyone old enough to remember that band’s infamy. Here’s the part I can tell you: Back in his youth, Memo auditioned with a shady manager who loved his voice, but not the package that housed it. “This is about more than music,” the manager tells Memo’s father, Jacinto (Alejandro Goic). “It’s about little girls’ first sexual fantasies.” There’s a cruel, yet believable homage to Cyrano de Bergerac’s dilemma in the manager’s words. A more “conventionally handsome” boy is found to lip-sync using Memo’s vocals, primarily on the potential hit “Nobody Knows I’m Here.” That song does for this film what the Wonders’ titular ditty did for “That Thing You Do.” Memo’s dreams of becoming a big star are ruined because no one will know it’s his vocals. Tragedy strikes.

Back in the present, Memo’s world is shaken by two events: the gruesome injury of Braulio and the arrival on his island of Marta (Millaray Lobos), the niece of Sergio (Nelson Brodt), the man who usually visits them with deliveries. “You’re sweet on her,” Braulio teases just before he gets hurt. Memo is so uncomfortable being on the mainland when it’s teeming with people that he doesn’t stay to learn of his uncle’s fate once he’s hospitalized. When Marta returns to the island with news, Memo completely ignores her until something forces a human response from him. “That color looks good on you,” Marta says of the glittery polish on Memo’s fingernails.

When Marta comments on a book by famed celebrity Angelo Cassas (Gaston Pauls) on the coffee table, Memo reacts violently. To stop Marta from leaving, he sings to her. It’s the first time we hear the adult Memo sing, and it’s clear he could have had a successful career. Marta allows him to record a video to her phone, which she sticks on YouTube without his knowledge. The combination of Memo and that particular song brings the past out of the woodwork.

“Nobody Knows I’m Here” wants to make a statement about the harsh price of fame and the awful, hurtful machinations that settle the bill. It just takes too long to get these ideas into the plot thanks to the clichéd handling of its protagonist’s dark past. The adult Memo clings to his dreams of stardom, stitching fabulous costumes to wear while his imagination ponders what could have been. But this is far from compelling, emotionally involving material because Memo’s quirks play as mere eccentricities. By the time we realize that Memo’s actions and reactions come from a deep well of trauma and guilt, the viewer's patience may have run too thin to supply the necessary empathy.

Director Gaspar Antillo occasionally untethers the film from reality, which isn’t really a problem but it left me uncertain if the film’s penultimate scene really happened. Additionally, the cinematography is often so dark that I could barely make out what was happening without watching multiple times. The art direction, however, is intriguing, making Braulio’s house into a messy, lived-in character of its own that could convincingly house a grumpy old man and his introverted, tortured nephew. The Chilean landscape is also used to great effect here.

If you’re wondering why Netflix would be promoting an arthouse film from Chile, you probably didn’t recognize that Jorge Garcia is the same guy from “Lost.” I cop to not catching that at all, even if my brain kept telling me I’d seen his face before, because I’ve never seen an episode of “Lost.” Being unfamiliar with his acting was probably a plus; Garcia is a big guy who can credibly hang either menace or wounded emotion from his frame. It’s unfortunate the filmmakers don’t give him much to play with. By keeping Memo’s true motivations hidden for so long, his pangs for stardom come off as shallow rather than steeped in a pain that’s in desperate need of closure. I’ve always believed that closure is overrated if not fully attainable, and if I’m correct in reading its climactic scene as half-fantasy, half-reality, “Nobody Knows I’m Here” shares my sentiment. I remain unsure, but I do know this is one of those films where your satisfaction will be measured in terms of whether you found its hero fully realized as a character. 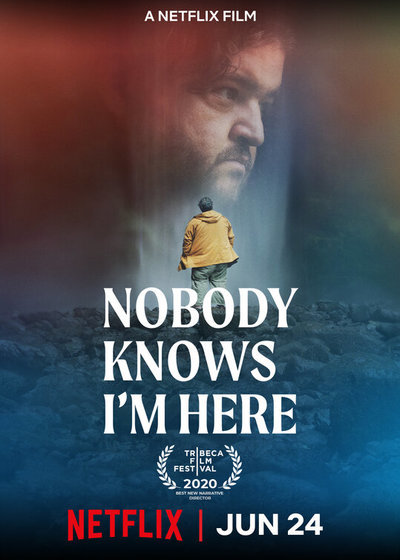