Ace documentary director Alex Gibney's "No Stone Unturned" is an investigation into the politically charged, unsolved 1994 Loughinisland massacre of June 18, 1994. Two gunmen clad in balaclavas and boiler suits walked into the Heights Bar, a small pub on a rural road, and opened fire, killing six men, the oldest of whom was 87. They had gathered to watch the World Cup broadcast live from New Jersey.

Context is everything here, and the best parts of "No Stone Unturned" allow Gibney to set this particular scene, offering what amounts to a high-octane history lesson charged with lingering trauma. Ireland was playing. It was supposed to be a great unifying moment for a country that had been riven by The Troubles for over thirty years, pitting Catholics sympathetic to separatists and Protestants loyal to England, spilling Catholic and Protestant blood all over British-occupied Northern Ireland. Sinn Féin president Gerry Adams, who had been accused of being a high ranking member of the Irish Republican Army and who was sympathetic to their views, had been invited to the United States by then-President Bill Clinton, a move that was seen as a possible harbinger of lasting piece by some and a slap in the face by others. The second act of this compact film sprints through the specifics, setting the historic scene for us and giving Gibney a chance to show striking, often horrifying images from Northern Ireland's civil war, such as news footage of a bloody-faced man, wounded in a bombing, being led away from the scene by police, and a stark photograph of a masked gunman crouching behind a short wall on a city street while very young children look on from the sidewalk in the background.

There was, and still is, speculation that the massacre represented a bloody statement against any possibility of reconciliation between factions. In the years that followed, as leads went nowhere and justice for the survivors never arrived, there was evidence suggesting a cover-up by police colluding with loyalists. The gunmen's car—which, to the delight of investigators had been left intact a few miles from the crime scene—was destroyed by police years later without warning or reason. Twelve years after the killing, the partners and children of victims held a press conference expressing their frustration and anger at the lack of justice.

Gibney took a cool, investigatory view of scandals and conspiracies in such films as "Enron: The Smartest Guys in the Room," "Taxi to the Dark Side" and "Client 9: The Rise and Fall of Eliot Spitzer." But he approaches this material in an uncharacteristically plugged in, heated way. He's taking it personally, and wants us to know he's taking it personally, no doubt because he grew close to individuals in the community near the crime scene while working on another project. We hear his off-screen voice asking questions and (unless my eye misleads me) see him pictured on camera. This is a righteous, at times angry movie. It wants to right a great wrong and bring peace to individuals who haven't been able to find any.

This is all sounds great in theory, but it turns to be dicey in practice. From the prologue, which recreates the massacre in the manner of a Hollywood action movie right down to the slow-motion, lavishly photographed closeups of guns firing and spent shell casings tumbling through the air, to the subsequent re-creations, to the pounding synth music and the other touches reminiscent of true-crime TV shows, "No Stone Unturned" at times veers close to a rant. It's clear that Gibney is going for something along the lines of Errol Morris' "The Thin Blue Line," which also used stylized re-creations, but the pieces don't fit together as neatly here, and there's a fair amount of "because I said so" argumentation in the sections that put together lingering details and attempt to suggest possible suspects.

And from there it lurches into territory that could be considered irresponsible. The picture of Northern Ireland bloodshed that's painted in this movie will make almost any viewer justifiably furious, but there's still something disquieting about the whiff of vigilantism that lingers over the final third. It's clear that the official sources tasked with solving this particular crime either failed due to incompetence or deliberately tanked it, but I'm not convinced that Gibney is necessarily the best replacement for them. And for all his facility with the more cliched elements of true-crime aesthetics, Errol Morris he ain't. The result is akin to hearing a charming but bitter man in a pub wax eloquent about a long-ago injustice, weaving a spell that has you nodding along in sympathy until he has a few too many and says, "I've got a gun in my glove compartment. Let's take a drive." 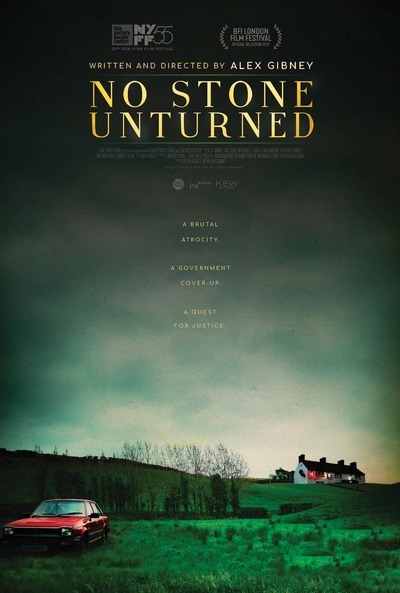