No Date, No Signature

The actress Hediyeh Tehrani, whose face has an elegant angularity worthy of Katharine Hepburn, is not only one of the chief reasons to see the powerfully understated drama “No Date, No Signature”; she can also be regarded as a living symbol of the current era of Iranian cinema. By my reckoning, that era began with the 2006 film “Fireworks Wednesday,” which was written by Asghar Farhadi and Mani Haghighi and directed by Farhadi, who would go on to win two Oscars in the following decade.

According to an interview I did with Haghighi in Tehran last year, “Fireworks Wednesday” originated when he went to Farhadi and expressed admiration for this first two films but noted that they had both directed two films that had been box-office duds. So he proposed that they collaborate on a film that would mark departures in two ways: it would focus on urban middle-class characters rather than the poor; and it would use movie stars rather than the non-actors favored by such major Iranian auteurs as Kiarostami, Makhmalbaf, Panahi and Majidi.

That change of strategy worked, and laid the groundwork for much that would follow. A big hit in Iran, “Fireworks Wednesday” provided the template for future Iranian films dealing with the middle class, including Farhadi’s Oscar winners “A Separation” and “The Salesman.” It also proved both the artistic and commercial value of movie stars such as its leading female actor, Tehrani.

While Farhadi’s global success spawned cadres of imitators in Iran, few of whom had his distinctive flair as writer and director, it also inspired some genuinely talented filmmakers following in his wake. Vahid Jalilvand, the director and co-writer of “No Date, No Signature,” must be counted one of the best of these. Like Farhadi, he studied theater rather than cinema in university and did a lot of television writing before turning to movies (this film is his second feature). And though he doesn’t seem anything like a Farhadi imitator, “No Date, No Signature” resembles the three Farhadi features mentioned above in not only focusing on middle-class characters but also including a lower-class couple as their opposite numbers.

In the first scene of “No Date, No Signature,” the classes collide literally. Driving home at night on a busy freeway, forensic pathologist Kaveh Nariman (Amir Aghaei) is clipped by a speeding driver and in turn knocks a motorcycle off the road. Stopping to see if the bike’s passengers are okay, he finds a couple and their two young kids, who are upset but seemingly unhurt. The father, Musa (Navid Mohammedzadeh) wants to call the cops but the doctor gives him some money and advises him to stop at a nearby hospital. The doc also has a conversation with the man’s eight-year-old son, who complains that his head hurts but otherwise seems fine. After everyone leaves, Nariman sees the motorbike cruise past the hospital without stopping.

Two days later, the boy is dead. An autopsy conducted by Nariman’s colleague Dr. Sayeh Behbahani (Tehrani) shows that he had botulism and concludes that he died from that. Nariman, though, isn’t so sure and appears to feel guilt over failing to get the family to the hospital but also because of the selfish reason he didn’t want the cops called: his insurance had expired.

Meanwhile, the grieving parents face their own reasons for guilt. When Dr. Behbanahi tells them that botulism is caused by tainted meat and asks what the boy had been fed, his mother, Leila (Zakiyeh Behbahani), starts to speak but stops at a look from her husband. The meaning of that look is soon clear: The boy ate chicken that Musa bought from a coworker. The realization that they apparently caused their son’s death sends the couple’s marriage into a tailspin, and Musa also reacts by going to his workplace and confronting the man who sold him the chicken, sparking a violent fight that involves several of his co-workers.

There are many subtle touches in Jalilvand’s smart, pared-down style. One is when, after the fight in the factory, Musa and some of his co-workers go outside and have a cooling-down conversation; after they go back in, the camera holds on the exterior of the building for what seems like several extraneous seconds. Once the story resumes, the meaning of that odd caesura becomes evident: a week later, we learn that Musa re-entered the building and beat the chicken seller into a coma, a crime for which he’s now in prison.

The father’s desperate act only seems to exacerbate Nariman’s sense of responsibility. After ordering the little boy’s body exhumed, he conducts a second autopsy himself, searching for evidence that the child’s death was actually caused by the head injury he sustained in the road accident. Of course, if he succeeds, it will potentially damage Musa’s legal defense, which depends on the chicken seller’s culpability in his son’s demise.

In some Iranian films, stories of class conflict and predatory behavior can be read as critiques of different aspects of the society, from its traditional mores to its biased legal system. Jalilvand seems less interested in such external analyses than in their interior manifestations: Ultimately “No Date, No Signature” is about two men whose guilt—whether deserved or not—simply runs away with them, upending lives that had previously seemed well-ordered.

As in Farhadi’s films, the success of this kind of drama depends not on its thematic depth but on its surface execution. And every aspect of the execution on display here posits Jalilvand as among Iran’s most assured directors to have emerged in this decade. The browns and grays of Payman Shadmanfar’s crepuscular photography, together with Peyman Yazdanian’s spare but evocative score, help create an overall mood of worry and haunted introspection. And the brilliance of all four lead performances—with Mohammedzadeh’s explosive turn a particular standout—once again shows the range and skills of Iran’s leading actors. 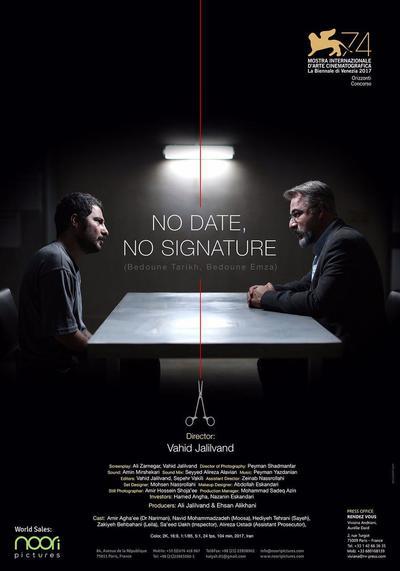