Night at the Museum: Secret of the Tomb

When the two writers of the first “Night At The Museum” picture, Thomas Lennon and Robert Ben Garant, wrote a jokey but highly pragmatic book entitled “Writing Movies For Fun And Profit,” franchise star Ben Stiller blurbed it thus: “These two guys are the reason ‘Night At The Museum’ won so many Oscars.” Behind the good-natured jokey cynicism there’s a truth: as talent-packed as any “Night At The Museum” picture may be—in this third installment  Rebel Wilson, Dan Stevens and Sir Ben Kingsley join cast regulars Stiller, the late Robin Williams, Steve Coogan, Owen Wilson, Mizuo Peck and others—one doesn’t come to a movie of this sort expecting anybody’s best work. Or at least one certainly shouldn’t, because it won’t materialize.

What “Night At The Museum: Secret Of The Tomb” does offer is a tired faux-“Indiana Jones” style prologue giving a little back story on the ancient Egyptian tablet (which looks like a giant gold ATM pad) with the magic to bring all the historical exhibits to life after the sun goes down. Looks like the tablet has got a case of ancient-curse rot, and it’s causing the exhibits to intermittently run rampant, causing Ricky Gervais’ museum director to lose his job and Stiller’s guard-turned-keeper-of-the-museum’s-secrets to head across the pond, where a personage housed in the British Museum may be able to reverse the rot. And so the familiar folk from the first two films, including an incontinent Capuchin monkey, a mugging Attila The Hun, Coogan and Wilson’s tag-team pompous Roman and aw-shucks cowhand, both in miniature, and more, get to rub elbows with a Sir Lancelot who’s plenty confused upon reanimation and an Egyptian semi-deity played by Kingsley. While Stiller has to distract his British counterpart, a chatty night guard played by the voluble Wilson.

The movie’s scenario and incidental bits are largely as stale as any studio product gets; to go by this movie, there’s no higher form of humor than the juxtaposition of old people doing new/modern things. So, despite the fact that Andrea Martin is by herself one of the funnier performers alive, “Secret” introduces her librarian character by showing her playing Candy Crush. Ten minutes can’t go by in this movie without it showing Neanderthals’ dancing to “Shake Your Groove Thing” or “To Be Real” or “Best Of My Love” or I can’t tell you what. The CGI Capuchin monkey peeing is also ostensibly hilarious. I know this is largely a kid’s movie but, I can’t say I was super-engaged. Every now and then a cast member will cook up a moderately engaging bit of business—one of the Neanderthals, for instance, is a Stiller doppelganger, also played by Stiller, and their interactions sometimes call to mind the dynamic of the mirror scene in the Marx Brothers’ “Duck Soup”— and coax a laugh or two, but then the movie shifts back into its formula and becomes a drag again. Things pick up a bit in the last third, in which Lancelot’s confusion over “Camelot” yields a funny pair of celeb cameos, only to revert to form with a what-will-happen-at-the-last-minute-to-save-the-day finale and treacly coda. “They come…to learn, Williams’ Teddy Roosevelt mutters rather half-heartedly near the end of this picture, reflecting on the function that museums can, or ought to, play in the lives of children. He also mentions sparking the imagination, all that sort of thing, and at this point, having endured, among other things, an action scene inside an M.C. Escher drawing that should have been a lot more creative fun than it turned out, the adult viewer, reflecting on the idea that this is “just” a kid’s movie, might conclude that kids deserve a little better. As did Williams and Mickey Rooney, both of whom will have this expensive but ultimately indifferent item at the tail ends of their respective filmographies. 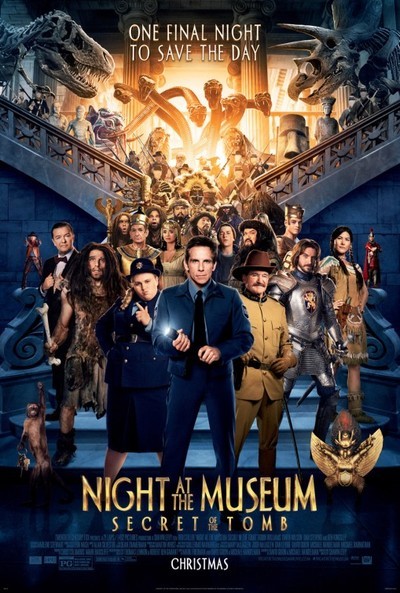