“Next Exit,” the debut feature from writer/director Mali Elfman, is a peculiar little film that starts off with a potentially astonishing hook—the kind that could easily be expanded into a limited series without having to stretch things out in any way—only to quickly transform into an all-too-familiar trip through a standard-issue road movie narrative. It isn’t necessarily bad, per se, and it contains just enough in the way of intriguing elements to more or less hold one’s interest for its running time. However, "Next Exit" never shifts into a higher dramatic gear at any point, and it concludes on a note that is more than a bit unsatisfying.

The hook is that the question about whether there is life after death has been conclusively proven; scientific evidence has even been released that backs up the fact that the human consciousness does indeed live on after the physical being passes on. This news understandably rattles the world in a number of ways—suicides are up now that people have been assured that they will be able to move on to another world after they die, while crimes like armed robbery are practically non-existent since the threat of death is now effectively off the table. Into all of this comes Dr. Stevenson (Karen Gillan), a scientist whose Life Beyond Institute in San Francisco is doing extensive research on this new field of study. Dr. Stevenson is soliciting volunteers to undergo euthanasia so that she and others may be able to track them in the afterlife as a way of gathering more data.

In New York, two people decide to take the institute up on their offer. One is Rose (Katie Parker), a troubled young woman racked by guilt over a lifetime of bad decisions, and the other is Teddy (Rahul Kohli), a genial sort convinced that taking part in the program will bring a sense of purpose to an existence. Teddy has felt seemed aimless ever since he and his mother were abandoned by his father when he was a child. When Rose and Teddy each arrive to pick up their rental cars, they find that they both lack one necessary item—she doesn’t have a credit card and he doesn’t have a license that will be valid past next week—and end up joining forces to rent one car and make the journey together.

If you have seen more than a few road movies, you can figure out what happens from this point. At first, the two barely manage to tolerate each other. But as the journey continues on, we see their relationship change in ways that inspire them to open up to each other about what's driving them to their literal final destination. Along the way, they meet up with estranged people from their respective paths—Teddy’s long-unseen father (Marcelo Tubert) and Rose’s practically perfect sister (Rose McIver) and her husband (Nico Evers-Swindell)—in the hopes of achieving some form of catharsis before they pass.

They also come across a trio of people who conveniently represent the various ways in which humanity has reacted to the news that there is life after death—a priest (Tongayi Chirisa) who is trying to make himself useful now that most of the solace provided by religion has been undermined, a Border Patrol agent (Tim Griffin) who is convinced that the spirits will be more consumed with getting revenge on those who did them wrong than in reconnecting with loved ones) and a hippie named Karma (Diva Zappa) who is all for living life to the fullest while you can.

The problem with “Next Exit” is that the road trip that makes up the bulk of the film, like most actual road trips, gets a little monotonous after a while. Neither one of the two main characters nor their respective traumas are especially interesting or engaging, and the changes they undergo along the way all seem pre-programmed by the needs of the screenplay rather than to serve their emotional development. The scenes involving the three strangers they encounter are just a little too on-the-nose to be effective, though the one involving the priest is the best thanks to the quietly moving performance by Chirisa. The conclusion also doesn’t work either—it doesn’t supply the necessary emotional fireworks and by pointedly avoiding certain existential questions (such as the possibility that the pain and torment in one life could potentially extend to the next) comes perilously close to feeling like a cop out.

But “Next Exit” does have some good things going for it. The performances from Parker and Kohli are both fairly strong and effective, enough to make you wish their characters were given a little more depth and complexity. Although the film more or less pushes most of the details of day-to-day existence in a world where death is not the end, there are some tantalizing hints offered here and there, including one morbidly funny bit than seemingly pays homage to another classic film involving both a cross-country auto trip and the constant shadow of death. If “Next Exit” had more elements like this, it might have pushed it over the line to become something worth seeing instead of the near-miss that it is. Although it doesn’t really come together, "Next Exit" is reasonably ambitious and made with just enough skill to make curious to see what Elfman does for a follow-up. 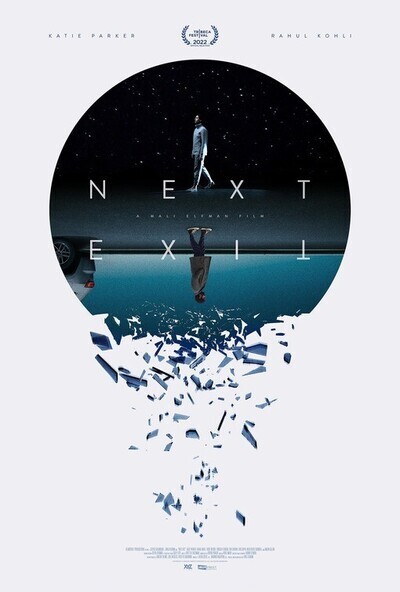