They say that history does not repeat itself, but it rhymes. That may be why our turbulent and divisive times are reflected in films set half a century ago, a time of large protest gatherings and marches, many about the same social justice issues that are still contentious today: rights of people of color, rights of women, rights of LGBTA+ people, rights of people with disabilities, police brutality, end to armed conflict, accountability of elected officials. And so, we have "The Glorias," "The Trial of the Chicago 7," and the upcoming films "A Night in Miami," and "Judas and the Black Messiah." Even Robert Zemeckis' remake of Roald Dahl's "The Witches" is set in 1968.

As powerful as these re-creations of the events, real and imagined, of the late '60s and early to mid-'70s are, the documentaries using archival footage of era's advocates are even more compelling. "Sisters of '77" documented the National Women’s Conference, with appearances by three first ladies, feminist leaders like Gloria Steinem and Betty Friedan, and a young Maxine Waters. And William Greaves' "Nationtime" lets us see many of the luminaries at the 1972 meeting of the National Black Political Convention held in Gary, Indiana. Such a roster includes Reverend Jesse Jackson, Dick Gregory, Coretta Scott King, Betty Shabazz, Mayor Richard Hatcher, Amiri Baraka, and Congressman Charles Diggs. "The Trial of the Chicago 7" eighth defendant, Bobby Seale, makes a stirring appearance emphasizing protest and voting.

This statement, adopted at the convention, sounds like it comes from a 2020 Black Lives Matter protest: "On every side, in every area of our lives, the American institutions in which we have placed our trust are unable to cope with the crises they have created by their single-minded dedication to profits for some and white supremacy above all."

"Nationtime" is a call to action, showing us how far we have come in some ways. Jackson notes in his electrifying speech that there were only 13 Black Members of Congress when proportionately "we are supposed to have 52." Today there are 56 Black Members of Congress (plus 42 Hispanic, 17 Asian, and 4 Native American). The speakers call on the US to play more of a role in ending apartheid in South Africa. No one in 1972 Gary even thinks to imagine a Black President or a Black/South Asian female Vice-Presidential candidate. Indeed, other than the two widows, and a mention of Angela Davis, there are very few women featured in the film and there is no discussion of the particular concerns of women of color or of other marginalized groups within the Black community.

By those measures—the number of Black elected officials, the end of apartheid, and the contemporary recognition that women's rights are human rights—we can take some satisfaction in our greater understanding and participation.

But for those very reasons, "Nationtime" is a sharper reminder of how little, even with those achievements, has been accomplished and how difficult, even with those opportunities, it continues to be. Indeed, it is fair to say that the Black family in the White House and the subsequent election of a President who has refused on more than one occasion to speak out against bigotry and white supremacy have exposed an increased backlash of overt racism. So many of the topics raised in 1972 are depressingly even more urgent today. The landmark civil rights legislation of the '60s created new opportunities for equality and progress but it did not deliver them.

The promise of those new opportunities is central to the convention. Jackson notes that almost half of Black citizens are not registered to vote. He and other speakers repeatedly call for Black people to take action to solve problems that affect everyone.

Jackson tells the group, "I don't want to be the gray shadow of one elephant of one party ... I want a Black party." He says if Black Americans were a nation, they would be the third largest Black nation in the world, and the richest. And he urges them to work together to make the most of that power. "The challenge is to transform ourselves from favor-seeking vassals and loud-talking, 'militant' pawns, and to take up the role that the organized masses of our people have attempted to play ever since we came to these shores. That of harbingers of true justice and humanity, leaders in the struggle for liberation." He takes the crowd to church with soaring rhetoric, punctuated with straight talk reminding the crowd not to "have the slum in you," and call and response: "What time is it?" "Nationtime!"

Throughout most of the convention, there is a balance between a call for unity and acceptance of differences. Mayor Hatcher welcomes inclusion of white people (especially young white people) to achieve common goals. The presentations are grounded and enriched by African-influenced music, drum-heavy with an electrified kalimba, and poems by Imamu Amiri Baraka and Langston Hughes, beautifully recited for the film by Harry Belafonte.

Some of the language has changed. The speakers use the now-unfortunately pejorative term "agenda" to describe their list of goals. The film's biggest omission, which would be less likely today, is its near-sole focus on the speakers, with no coverage of the participants or the substance of their discussions. We see the Michigan delegation abruptly walk out (and are later told some members of the delegation decided to stay), but we are never told what the issue was that made them decide it was impossible to stay.

Dick Gregory tells the crowd that the convention can be summed up by what he overheard a boy tell his friends the day before: "When I grow up, I want to be in the Black caucus." Perhaps 10-year-old Barack Obama, then living on the other side of the world with his American mother and Indonesian step-father, or eight-year-old Kamala Harris, living in Oakland, California, were similarly inspired by this event. Now, thanks to this restored documentary, another generation can have new dreams of what they can do for Nationtime. 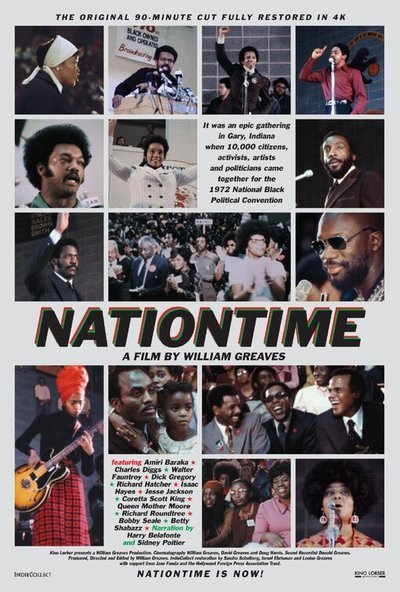 Amiri Baraka as Himself

Coretta Scott King as Herself

Dick Gregory as Himself

Jesse Jackson as Himself

Bobby Seale as Himself

Harry Belafonte as Himself

Isaac Hayes as Himself

Richard Roundtree as Himself

Betty Shabazz as Herself

Charles Diggs as Himself

Walter Fauntroy as Himself

Herman Carl McCall as Himself