If you're in the right frame of mind, "Naked Singularity" might be the sort of film that you like more than you expect to, and that you find yourself thinking about even though you wished it were better. There's something off-kilter about it, in a good way. It has a confidence that might not be earned but is still enjoyable to see. It's tapping into something true and knows it. And it's anchored to a confident, charming, seemingly ego-free lead performance by John Boyega as Casi, a idealistic but exhausted public defender who senses civilization cratering and starts to think about joining a plot to relieve deadly criminals of millions in drug money.

Boyega exploded into mainstream consciousness in the cult classic "Attack the Block" and became an international star playing Finn in the "Star Wars" sequel trilogy. The latter was ultimately a disappointment through no fault of Boyega's; the close-but-no-cigar screenwriting never followed through on the promise of the character's origin story, but the actor was always fully committed, playing Finn as a good-hearted hero who only pretended to be a selfish, cowardly heel. In those films and others (including the misbegotten "Pacific Rim: Uprising") he had an anxious real-guy energy reminiscent of James Garner, Jack Lemmon, and the young Al Pacino.

Boyega operates in that mode all through "Naked Singularity," and it seems to center both the director and his costars, including Bill Skarsgård as a slimebag lawyer named Dane; Ed Skrein as a criminal who wants to get the drug money before it can be claimed by the Mexican drug cartel that generated it; and Olivia Cooke as a police impound worker and underworld fringe figure whose hookup with Skrein's character sets the plot into motion.

Co-scripted and directed by first-time feature filmmaker Chase Palmer, one of the screenwriters of the 2017 "It," and adapted from Sergio De La Pava's acclaimed 2013 novel, this is a despairing, semi-satirical, 1970s-styled New York-is-a-scuzzpit-and-the-rest-of-the-world-ain't-so-great-either picture. (Not one of the leads is American, though. Why?) Pushing against naturalism, "Naked Singularity" is directed by Palmer in the super-slick style of David Fincher's "Fight Club," which confounded viewers by looking like a magazine ad for what it mocked. There are points where the film is so ostentatiously clever that it seems to lose track of the story's core feelings, despair and outrage.

Some of the cross-cutting, between actions being described or planned and those same actions being executed, feels inappropriately light-and-funky. You may start to wonder if “Naked Singularity” is a from-the-gut statement about How Things Are, or a stealthy audition reel for a superhero movie or action flick, shellacked with a thin coating of angry indieflick idealism. (The film even quotes Voltaire's Candide: “If this is the best of possible worlds, what then are the others?") Fortunately, the gravity inherent in the material anchors the movie when it threatens to spin out of control. And it is gravity, as both metaphor and scientific concept, that the screenplay returns to, like a planet with such a lopsided elliptical orbit that it fools astronomers into thinking it's going to leave the solar system and never return.

"Naked Singularity" is not science fiction, much less failed science fiction, but a comedy-drama with a cosmic sensibility. It repeatedly lets its characters discuss theories about why modern life seems so broken and perverse. They never arrive at satisfying explanations, but talking it out serves as an extra-dramatic steam valve, releasing pent-up bad vibes.

At various points, the hero's neighbor, a pothead physicist played by Tim Blake Nelson, shows up reiterate the script's binding ideas, including a theory that the universe is headed towards collapse-implosion, like matter sucked into a black hole. That excess of gravity explains everything from the power failures that recur throughout the film to the way that the legal system keeps punishing minor infractions with long sentences. (The smug face of the system is represented by Broadway star Linda Lavin, playing a judge so misanthropic that when offenders try to become better people, she punishes them even more harshly.)

The opening section, which lays out the moral and logistical details of Casi's world and features a hard-boiled voice-over narration that never returns, is the most engrossing, because it makes us feel as if we're about to see the kind of movie that rarely gets made anymore: a New York drama about idealism being crushed beneath the weight of corruption, apathy, and self-interest. The more the script (co-written by David Matthews) focuses on the details of stealing the drug money, the less special the film becomes. There's a lot of wasted motion, and when the story careens towards the final stretch of its 93-minute running time, you can't help noticing that Cooke's character never added up to much, and that we never quite felt the hero's disillusionment and anger as keenly as we needed to. (This is a rare movie that needed more time to breathe; seemingly important elements, such as the gangster Hasidim entangled with Skrein's character, appear to have been cut for pacing.)

Still, there's no denying that both the story and the mood of the picture suit the time in which was released. "Naked Singularity" arrives at a moment when human civilization seems to be reaping karmic punishment for generations of callous self-interest. This is a film for an era of melting glaciers, flooded cities, burning forests, Covid variants, and armored cops gassing, beating, and shooting unarmed citizens because it’s fun for them, and because officials like Lavin's judge will make sure they’re never punished. To paraphrase "And Justice for All...", the whole system is out of order.

Now playing in theaters and available on demand on August 13. 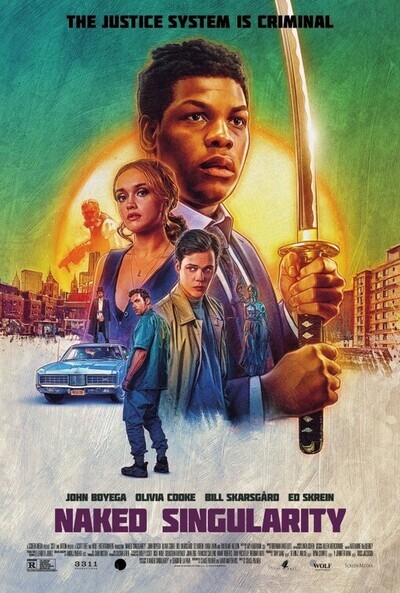 Rated R for language throughout, some violence, sexual references and drug use.

Writer (based upon the book "A Naked Singularity" by)