The pitch for the Netflix original movie “Naked” was about as simple as they come: “Like “Groundhog Day” … but naked.” Marlon Wayans, in something of a career surge with this premiere and his new NBC sitcom “Marlon,” reunites with “A Haunted House” and "Fifty Shades of Black" director Michael Tiddes for this story of a man who repeatedly wakes up naked in an elevator on his wedding day. Forced to live the same nightmare day after day, complete with a disapproving future father-in-law, obnoxious ex-boyfriend of his future wife, an unexpected stranger in his bed, and much more, Rob is one of those guys who has to figure a few things out before he walks down the aisle. If you’re thinking to yourself, “That’s not enough story or comedy for a movie,” you’re not wrong. It’s an extended sketch, the kind of thing that could have worked as a short film or a sitcom but feels stretched far beyond its potential at 96 minutes (and you'll think it's twice as long). Wayans has always been an underrated physical comedian, and the movie works best when he’s allowed to unleash that side of his persona, but that’s too rare and not enough to rescue the rest of this comedy ceremony.

Wayans plays Rob, a charming neurotic who recognizes that he’s “marrying up” to the lovely and patient Megan (the always-solid Regina Hall, given way too little to do here). His father-in-law (Dennis Haysbert) can’t stand that his daughter is marrying a substitute teacher instead of the millionaire (Scott Foley) she could have gotten hitched to years ago. As the actual wedding approaches, Rob feels the natural nerves that come with the big day, amplified by all of the people around him who seem to be working against the union, including a Maid of Honor (Eliza Coupe of “Happy Endings”) who knows how irresponsible Rob can be. And then he wakes up in an elevator without a stitch of clothing on, while everyone else is waiting for him at the church. He rushes to his wedding, but when the church bells ring, he lands back on his face in the elevator, starting the whole crazy day over again.

Of course, Rob has to learn a few key lessons about responsibility and the sanctimony of marriage in order to get past his “Groundhog Day” situation, but the whole thing feels thin right from the very beginning. Over the course of his repetitive day, Rob makes new friends, including R&B musician Brian McKnight of all people, and learns a few things about the people at his wedding. The idea that Rob was so insecure that it blinded him to much of what was going on around him, including how lucky he was to find the right girl, isn’t a bad one, it’s just never fleshed out in any significant or, more importantly, entertaining way. The script needed another pass, and, most of all, a director who knew how to find the right frenetic pace to capture the tone of a film in which its leading man was naked half the time. Tiddes never leans into the insanity of his concept in a way that makes it work. Believe it or not, it's too boring. You could probably close your eyes and imagine the entire movie right now.

The one thing that almost salvages “Naked” is the fearlessness of its leading man, always a welcome presence but often working on projects that don’t give him enough to do. Here, he’s allowed to show off a few times, especially in the center of the film when Rob basically memorizes every possible outcome to the situation in front of him by repeating the same day over and over again. There’s a fight with Foley, in which Rob knows every punch before it’s thrown, that’s pretty funny, and I liked when Rob realized that an ambulance was the fastest way to get him to the church and so he basically throws himself in front of cars over and over again. It's a movie of moments but too little to connect them.

The problem is that "Naked" gets as repetitive as Rob’s predicament. We see the same jokes, learn the same lessons, hear the same speeches—and the film wears out its running time on its way to about a dozen endings. Are there worse ways to spend a Friday night with your favorite streaming service? Sure, but if this and the Sandler Cinematic Universe are the lynchpins to Netflix’s approach to movie comedy, the major studios have less to worry about than they think. 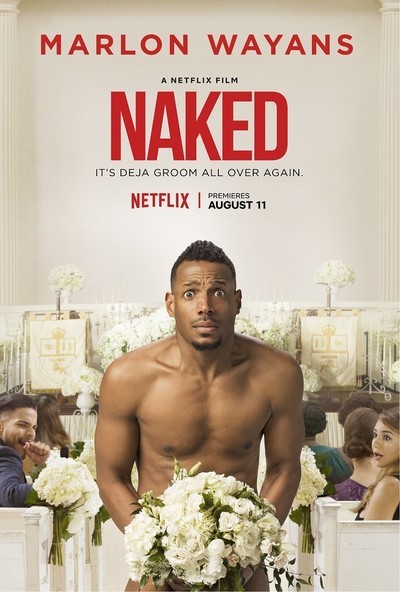 Writer (based on an original story by)