“My King” is one of the most ambitious types of movies out there: a relationship film. Standing out is a tall order, especially with the multitude of artists who try to articulate the unspeakable phenomenon of love and its intangible conditions. Though it too readily compares to other intimate observations on life-changing connections, you could place this take by director Maïwenn somewhere between Ingmar Bergman’s masterful “Scenes from a Marriage” and Derek Cianfrance’s searing “Blue Valentine,” while never being able to forget "My King"'s two brilliant performances from Emmanuelle Bercot and Vincent Cassel.

The story begins with Bercot's middle-aged Tony heading to physical therapy after hurting her knee during a skiing accident. We soon learn that this is the present, and a trauma is in her past. Her therapist asks her why she made a mistake when skiing this time, and then reasons that Tony's body couldn’t deal with a past event. Maïwenn touches upon how trauma could be felt physically in the body, a vivid metaphor for the the way in which heartbreak doesn’t just mess with our lives, but can consume us completely. Physical therapy proves an apt, genuine framing device, as Maïwenn's script (co-written with Etienne Comar) is in so much pain itself.

The pain from Tony's knee comes from that of a great love, embodied by Vincent Cassel’s Georgio. From the beginning, the movie puts a unique claim on the intimate love story by placing it strictly from a woman’s perspective (using a female cinematographer, Claire Mathon, to boot). We first see Georgio as just a face in the crowd outside a dance floor, while the intoxicating Son Lux song “Easy” plays. Tony soon initiates the meet-cute by flicking water in his face, a reference to when they knew each other from much earlier days; since then they’ve had their own experiences, she a now-ex-husband, and he looking to settle down. With timing on their side and passion to share, they connect instantly—an apartment, a baby, a new group of friends, a devastating implosion and more follow.

In regards to the filmmaking of the very promising Maïwenn, "My King" is a bit of a drop-off from the heights of her previous thriller “Polisse,” a highly-recommended thriller that captured the many days of many different lives of those in a police division, like a season of a show compacted in a brilliant two-hour cut. Though just as darkly beautiful, "My King" is a distinct shift towards more ordinary filmmaking, with the back-and-forth narrative erring towards generic. But while the directing doesn’t have a distinct visual sense to leave a mark of its own, its the center couple that arguably matters most with a film like this, of which “My King” charts a relationship step-by-step with incredibly vivid performances from Cassel and Bercot.

As expressed to us through Tony’s gaze, Georgio’s presence echoes the description Jennifer Lopez sang of Ben Affleck in the bizarre pop culture gem “Dear Ben”: “My lust, my love, my man, my child, my friend and my king.” In “My King,” Cassel’s malleability flourishes as this love interest who is unpredictable in the absolute best and worst ways. He can be charming, like when early on he offers to give Tony his "mobile," and then after a strong beat tosses her his phone before disappearing, a smirk on his face, into a car. He can also be mysterious, as when repo men randomly show up at Tony & Georgio’s apartment to account for debt she has never heard about. As the story moves through different relationship chapters, Georgio vividly embodies the restlessness of happiness. And with Tony sticking with him through his more stubborn moments, you understand how he's become an irresistible package, even with the irrevocable heartbreak he may inflict on her. Georgio leaves a space in her that only Georgio can fill. Cassel achieves that effect a filmmaker needs for their audience to recognize a fictional character as a projection on the screen of their personal memories: Georgio becomes everything.

Bercot’s performance is one of those unmissable film events in which an actor gives 100% in every single frame she’s in. Whether she is relishing a big laugh, screaming out in the rain, or going through her physical therapy, it’s a portrayal from an actress dead-set on articulating the very specific. A scene in which she stirs up a tornado of glassware-breaking boisterousness and freaky sadness during a party with Georgio’s friends (with echoes of Gena Rowlands in the climax of “A Woman Under the Influence”) is but one magnetic passage. Adding to what co-writers Maïwenn and Comar have gathered from real life, Bercot brings waves upon waves of passion to this story, and makes "My King" alone worth seeing. It’s also a performance that tied Rooney Mara in “Carol” for Best Actress at the Cannes Film Festival in 2015, and in my opinion deserved to be the sole winner.

“My King” is a very wise movie with no answers, one that presents the impossible stability of love like scientific fact. Through raw dialogue ("You came over to me because I am what I am," Georgio tells Tony) and continuously successful high-wire conversations, it earns that tense naturalism. The movie is fascinating to watch as it tries to wrap its head around all of these ideas: how loved ones do not change over time or with new commitments, or how the same source of joy can bring even more despair. As her heart bleeds out on the screen, Maïwenn makes a devastating case that love is an unavoidable and Sisyphean task. But if loved ones never leave us, even in the form of a memory, can we ever stop pushing the rock back up the hill? 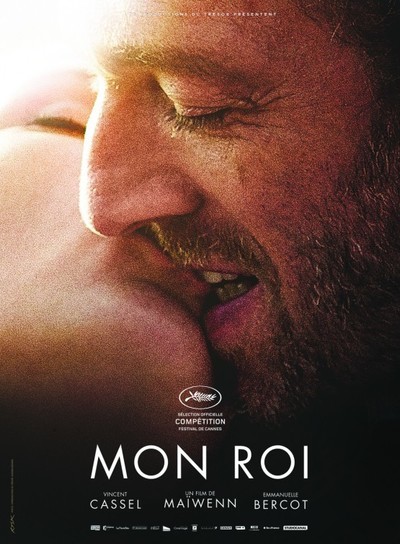