Nobody makes light-hearted farces like Spanish comedy "My Big Night," a comedy about the filming of a New Year's Eve telecast in October, any more. The film seems to hail from a different time, though I'd be hard-pressed to say exactly what time that was. Directed and co-written by Spanish post-punk filmmaker Alex de la Iglesia ("Witching and Bitching"), "My Big Night" is a a hybrid of star-studded extravaganzas of the '60s, like "It's a Mad, Mad, Mad, Mad World," and the raunchy gag-centric spoofs of the '70s and '80s, like "Kentucky Fried Movie." There's also a surreal element to the film that reminded me of Luis Bunuel's "The Exterminating Angel," another absurdist comedy about people stuck in a room with no exits. "My Big Night" brings all these films to mind because it's just as novel.

The premise of "My Big Night" is fine, but the film's execution is what really sells it. Jose (Pepon Nieto), a dumpy-looking everyman, is hired as an extra after another schlubby-looking, non-descript patsy is crushed mercilessly by an ill-attended camera crane. Jose is then seated amongst a group of people who laugh, dance, and cheer whenever the camera crew needs them to. The booze and food on Jose's plate is fake, and his fellow guests are all restless: they try to guess the Wifi password, buy contraband alcohol, and show off their scars to each other while they wait for their next cue.

Jose's companions also have competing agendas since each feel that they are the show's real stars: aging pop singer Alphonso (Raphael) tries to steal a prized time slot from airheaded young rival Adanne (Mario Casas) while fed-up personal assistant Yuri (Carlos Areces) plots to murder his step-father Alphonso and co-hosts Roberto (Hugo Silva) and Cristina (Carolina Bang) bully each other just to get the best monologues.

"My Big Night" is thankfully full of inspired sight gags, and gut-busting dialogue. Don't ask me to list all of my favorite moments from the film; there are too many. Most of the film's more inspired moments are small, though the film's cast earns belly laughs throughout. Sometimes I cracked up at something as minor as the robotic whooshing noise that Alphonso's chair makes as he spins around dramatically to confront Yuri. Sometimes it was a well-timed comedy routine that got me, like when Cristina gives Roberto an allergic reaction, and then tries to wrestle some A-material lines away from him while he hides half of his face behind various carnival masks.

And sometimes I laughed in spite of myself at dumb but well-performed, paced, and shot jokes, like when Adanne promises his manager Perotti (Tomas Pozzi) that he will not have any more affairs while he covertly receives oral pleasure from a groupie. This gag could have easily misfired given how many of the film's women come across like gold-diggers, crazies, or nymphos. De la Iglesia parodies phonies of both genders, but he comes down especially hard on superficial female characters like Cristina and Adanne's treacherous little friend (she tries to blackmail him). You can tell that de la Iglesia cares about all of his characters, and even approves of working-class women like crew members/lovers Rosa and Amparo (Carmen Machi and Carmen Ruiz) and Jose's love interest/fellow extra Paloma (Blanca Suarez). But there's something almost hatefully juvenile about some of de la Iglesias's woman-hating jokes, particularly a sequence where Jose is ushered through a changing room, while several dancers have their silicon-enhanced, gravity-defying breasts bared.

Still, it's the timing of jokes in "My Big Night" that sell them, like the sour, nervous look Paloma gives Jose when she alludes to a previous love affair that ended after a mysterious "mayonnaise incident." Or the bit where one mortified extra complains that her Samsung Galaxy phone is broken, and her companion rails "I shit on your Galaxy!" I fell in love with this film because of the way the PA system blares when the crew tries to get Jose to pick his mom up. And the mortified expression on Nieto's face when he explains to Paloma that his mother has been clutching a giant crucifix to her chest "since she tore it off dad's coffin." I laughed a lot at "My Big Night" and can't recommend it highly enough. 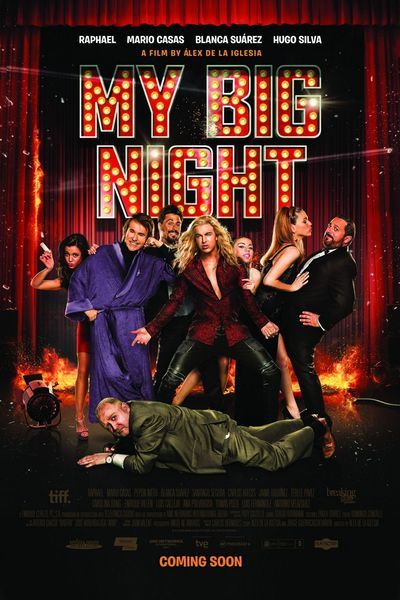