There's nothing fun about panning a feature by a first-time director, especially when it seems to come from a place of good intentions, but "Music," a musical fantasy drama about an autistic teen, is bad. Mystifyingly bad. Verging on "What were they thinking?" bad.

Directed by singer/songwriter Sia, from a script that she cowrote with children's author Dallas Clayton, the film seems to be going for a gritty-yet-also-magical-and-empowering vibe. But it often seems to lack common sense, and that paradoxically makes it feel insincere and hollow even when it's trying its best to beguile us with its artistry and compassion. If not for its game ensemble cast and a few memorable moments (including a cameo by Juliette Lewis), it should be counted as a disaster.

Maddie Ziegler, a neurotypical performer, stars as Music, an autistic orphan whose mother is a junkie and whose grandmother recently died. Ziegler spends the majority of the film's running time with a beatific grin on her face, bobbing to music on her headphones, and hallucinating fantasy dance numbers that, unsurprisingly, look like a Sia video (warehouse/soundstage; theatrical lighting effects, including silhouettes; choppy cutting; minimal sets and decorations and school play-looking costumes; flatly painted but brightly colored backdrops, and so on).

Music's main caretaker is her big sister Zu (Kate Hudson, radiating hard-earned wisdom and rocking a buzz cut), a former substance abuser struggling through the early stage of recovery. She's a tough wisecracker who hits the heavy bag at a gym and deals pills on the side. The makeshift safety net beneath Music also includes Héctor Elizondo as George, the caretaker of Music and Zu's apartment complex, and Leslie Odom, Jr. as an immigrant who unfortunately is defined mainly by his saintliness and and unswerving emotional support of the sisters.

Questions. So many questions. Starting with: is Music a big Sia fan? Is that why her fantasies look and sound like Sia videos? Is she secretly a choreographer and songwriter who models herself on Sia? Are her fully realized musical fantasies the product of genius-level observation and emulation by a gifted amateur, like the scene in "Rain Man" when Dustin Hoffman's character goes to Vegas for the first time and cleans out the casino?

We might also ask: does anyone in Music's orbit understand what she's going through? It doesn't seem like it. Sometimes the world gets to be too much for Music and she loses her composure and flips out, and it's at this point that another character comes in and physically restrains her or sits/lies on top of her, which, according to autistic groups and individuals who've taken issue with this project, is not an accepted way of handling such situations, to put it mildly. (Sia has already apologized to members of the autistic community for misrepresenting or offending them, and promised to cut out the restraint scenes, although the version this critic screened still contained more than one.)

Music, as presented in the movie bearing her name, is not a teenager, a person. She's a problem, a burden, an issue. She's defined in relation to other characters' responsibility to care for or "deal with her," and the film's musical fantasies don't illuminate her interior in any meaningful way. There's a deep disconnect between the film's two modes: the funky downtown indie about gritty "real" things, and the music fantasy numbers. Were they going for a "Pennies from Heaven" feeling? If so, it didn't come through. The fantasy numbers are so numerous and dramatically undistinguished that they don't seem like Music's escape from reality, but the movie's escape from having to deal with Music.

Please bear in mind that I'm not blaming the actress. It is the responsibility of the director, screenwriters, and producers to oversee matters of authenticity and provide depth and nuance to a role such as this. Nevertheless: What I saw in the dramatic scenes that center Music were, with few exceptions, so bad that I didn't want to look at the screen when the character was on it. We're talking about a Mickey Rooney-in-"Breakfast at Tiffany's" level of wrongheadedness. A neurodivergent minstrel show.

The movie has other problems as well, and they're all of a piece with its general failure to imagine people beyond stereotypes. I didn't see much evidence of deep understanding of the life of a substance abuser in the way that the movie portrays Zu (the generic scene where she smells an opened bottle of alcohol and then pours it down the drain could've been written by somebody who's never had a drink, or watched another person have one). Likewise, can we just agree that we're at the point in American indie film history where it's time to retire the bighearted Latinx landlord and the generic African best friend, both of whom exist onscreen to serve the needs of, and comment upon the plight of, the white main characters?

So Ebo is from Africa. Good to know. That's a continent, like North America. I'm from North America. Where in Africa is Ebo from? What country? What part of what country? What's his native language? How long has he been in the United States? If he's lived in more than one part, what differences did he notice? And what of George? Who is he, as a distinct individual who has a life beyond the scenes that he happens to appear in? Where is he from? What's interesting about him besides the fact that he's a caretaker? His entire character is defined through his relationship to the sisters and their lives, just like Ebo's. At least Ebo has some resentment towards his brother, and gets a scene where he plays the piano for a minute.

What a missed opportunity "Music" is—never more so than when it's centering the character who gives the movie its title. I know and am close to a number of people who have variants of the conditions depicted in "Music." I've known one for decades. None are holy fool-types with no discernible personalities beyond wearing headphones and grinning and blurting out simple phrases and sometimes getting frustrated to the point where they make a scene in public. I'm not saying nobody exists who acts that way, while exhibiting no other psychological or behavioral details that might help flesh them out as people. You can go out into the world and find somebody who fits any stereotype if you're looking to prove this kind of point. But it isn't the kind of point an artist should wish to prove. Better to present a character that makes the viewer say, simultaneously, "This character is unique and remarkable" and also "This presentation of the character tracks with everything we know to be true about her scenario." That's the sweet spot where a storyteller wants to land. 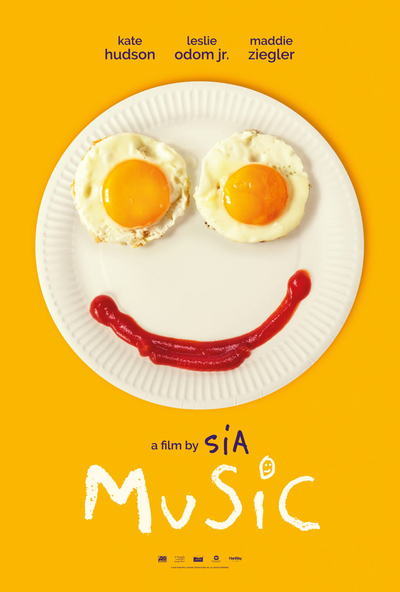 Sia as Popstar Without Borders