Murder on the Orient Express

I know. I KNOW. Ever since seeing the trailer for the mystery thriller “Murder on the Orient Express,” a question has been nagging at you. It’s not who among a diverse array of actors including Judi Dench as a Russian princess, Willem Dafoe as a German professor, Penelope Cruz as a depressed missionary and Johnny Depp as a thuggish art dealer, is the killer. But why has a small furry mammal disguised as a magnificent beast of a handlebar mustache in 50 shades of silvery gray taken up residence under Kenneth Branagh’s nose?

The hair apparent seems specifically designed to practically steal every scene it appears in during this sumptuous yet ultimately stuffy and overstuffed big-screen return visit to Agatha Christie’s most durable novel. It's even responsible for the film’s best sight gag. If Branagh, the star and director behind the 21st-century digitally-enhanced stab at bringing this ensemble vehicle back to life wanted to make a statement to distinguish this take on his world-famous Belgian detective Hercule Poirot from any other, he certainly has. In the 1974 movie adaptation helmed by Sidney Lumet, Albert Finney sported a pert black swatch with Dali-esque twirls at the ends. Boring, right? Branagh’s fuzzy wuzzy is like an ocean wave of whiskers, from ear to shining ear. Best supporting player? That honor goes to that dashing splash of a soul patch on his chin.

OK, I am stalling. Let’s accentuate the positive first. The script by Michael Green (“Blade Runner 2049”) does a bang-up job of introducing us to Poirot, a fuss-budget stickler who demands perfectly cooked four-minute eggs and tsk-tsks their imperfect dimensions—and then doesn’t even bother to eat them. He is a control freak who insists on balance in everything, from how a tie sits around a man’s neck to impeccably baked bread. The place is Jerusalem (actually, Malta as a stand-in) and the year is 1934. Poirot is at the Wailing Wall about to deliver the solution to a crime tied to three clerics of different faiths and a stolen artifact. With the showbiz panache of a Vegas magician, he reveals the perpetrator with an unexpected flourish involving a cane. That sends the message, “Hey, this could be fun.”

But matters get perfunctory rather quickly when fellow passengers whose baggage clearly includes secrets begin to pop up, including Daisy Ridley (Rey in “Star Wars: The Force Awakens”) as a porcelain-skinned governess and Leslie Odom Jr. (Aaron Burr in Broadway’s “Hamilton”) as a doctor who attempt to disguise they are an interracial couple. Those marquee credits are bound to draw in the under-30 demographic. But, alas, the only fully fleshed-out being turns out to be Poirot, who moons over a portrait of a lost love and undergoes an existential crisis of sorts when he finds himself unexpectedly confounded when a dead body turns up on the train with an even dozen stab wounds. The luxury locomotive traveling from Istanbul to Calais also comes to a halt about a half-hour in when an avalanche causes it to stop in its tracks atop a dangerous trestle. I wish I could say that the storyline at least picks up steam, but it never quite does especially since it devolves into a series of private interrogations by the imperious Poirot in a café car.

Michelle Pfeiffer does what she can as a man-hungry rich widow searching for her next husband. Derek Jacobi and Josh Gad conspire as a valet and assistant to Depp’s scar-faced hoodlum. Other performers barely have the presence or enough dialogue to make much of an impression including the incredibly talented Olivia Colman as Dench’s lady in waiting. In addition, there are veiled allusions to the 1932 kidnapping of aviator Charles Lindbergh’s baby son, which few besides history buffs will recognize today.

Branagh, the actor, comes through unscathed. Branagh, the director, not so much. He did wonders with making Shakespeare relevant for young audiences with his “Henry V” and found a way to make Disney’s live-action “Cinderella” seem fresh and new. But despite camera trickery with ineffective overhead shots and a long one-take scene as Poirot boards the moving train, there is too little levity and cleverness afoot, especially with a cast whose talent is barely tapped. The key isn’t whodunit but how you do it.

However, that mustache—which even grows limp and messy when matters get dicey for Poirot—deserves a place in the pantheon of great follicle-ly enhanced performances. Perhaps it could sit alongside George Clooney’s waxed-to-perfection facial accoutrement in “O Brother, Where Art Thou?” As for “Murder on the Orient Express,” it squeaks by as passable entertainment by just a hair. 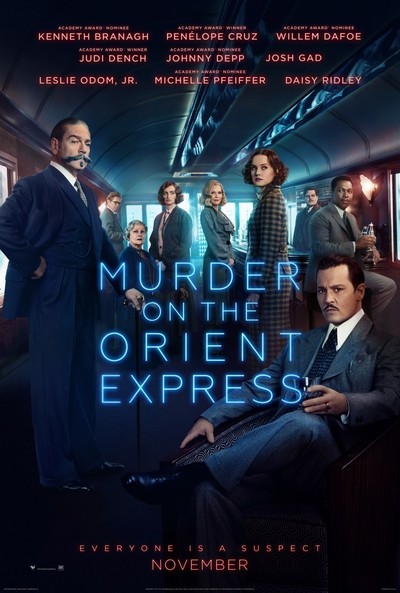