When Kurt Vonnegut, then in the U.S. Army, was being held in a German prison camp, he was asked by his guards why he was not fighting for the Germans--since he had a German name. Vonnegut later confessed in his introduction to his novel, Mother Night, “If I'd been born in Germany, I suppose I would have been a Nazi.” It is easy to lose sight of the fact that almost all of us take the side of that country where we are born or that tribe we are born into; for every person who takes sides for ethical reasons, a thousand or more take sides because of accidents of geography or birth.

“Mother Night,” a difficult movie made from Vonnegut's 1961 novel, is about a man whose life illustrates that reality. His name is Howard W. Campbell Jr., (Nick Nolte) and he is born in the United States but moves with his family to Berlin in 1919. He grows up, becomes a successful playwright, marries an actress, and by then the war clouds are gathering. Should he stay in Germany or return to America? An American agent (John Goodman) makes it easy for him, by asking him to stay and deliver anti-Semitic and anti-American diatribes on Nazi radio. Through a subtly coded system of pauses and coughs, the broadcasts will also carry secret information of great use to the Allies.

I have no doubt that such systems were in fact used, but for the purposes of “Mother Night” this scheme is ideal: It puts Campbell on both sides of the same fence. As his German father-in-law tells him, “Even if you were a spy, you served Germany more than the enemy.” Did he? The experience at the time indicates that none of the propaganda broadcasts (by Tokyo Rose, Lord Haw Haw, Ezra Pound, etc.) had much of an effect, since they were seen as exactly what they were.

Campbell's secret handler tells him that the American government will never claim him or come to his rescue. After the war is over, and he sees with his own eyes the horror of the death camps, Campbell is able to make his way to New York City, where he lives for almost 15 years under his own name; no one can believe he is the same person as the notorious traitor.

If the movie had been played out in this tone, I might have felt it worked better. That tone would not, however, have been Vonnegut's, which is more daring but harder to film. He adopts a wry angle toward his material, hinting at the madness and evil which lurk just below the surface of civilization, and the movie follows its story into Vonnegut land. A neo-Nazi newspaper publishes his address, and Campbell finds himself consorting with American Nazis and assorted other fauna, including “the black fuehrer of Harlem” and the nice old man across the hall (Alan Arkin), who is a Nazi--or then again, perhaps he isn't. Helga, his German wife, thought dead in a Russian attack, turns up again--or then again, perhaps she doesn't.

This unwelcome publicity causes Campbell a dilemma: Which side was he on? Was he an American who inadvertently helped the Nazis? An American not reluctant to help the Nazis? A Nazi posing as an American? His old handler (Goodman) turns up again, but cannot help him, and eventually he finds himself standing stock still in the street one day, because he has no reason to move in any direction.

His paralysis is broken by the Israelis, who arrest him and take him to Israel for trial as a war criminal. He is given a typewriter and three weeks to write his memoir (the cell scenes are the movie's framing device), and he can talk with, but not see, one of his fellow prisoners, Adolf Eichmann. His story concludes, I suppose, in the only way it should. It is a tribute to Nolte's performance that while we are confused about the meaning of the story, we never doubt the presentation of his character.

Walking out of “Mother Night,” I asked myself what statement, exactly, the movie had made. I could not answer. Campbell is a man without a country, without core beliefs. It is impossible to say for sure which side he was on, and which side he harmed more. He was a man prepared to take the most convenient course, and for him the ability to stay in Germany and become a famous propagandist (wined and dined by top Nazis) was very convenient, especially if he could pass along secret messages for the Americans, which was convenient, too.

The convenience for Campbell ended when the Nazis lost the war. Since the Americans were never going to claim him, it would have been more convenient if Germany had won. I assume in that case that Campbell would have stayed in Germany, would have been celebrated as a hero, and eventually would have been given a plum job. The dilemma Vonnegut sets him is that he cannot jump off the ship it was convenient for him to sail through the war on.

Vonnegut wants to show us a man very much like most of us, no smarter, no braver, who does what he does because it will contribute to his comfort and perhaps to his survival. There but for the grace of God go we, drifting through life having benefitted from chance and convenience, hoping the day will not come when we have to risk everything by declaring ourselves. It takes an extraordinary man to stand outside his tribe and try to see what is objectively good and right. Campbell was not within miles of being that man.

Does the film work? Not really. It loses itself in comic caricatures of the loonies that Campbell meets in New York; and its melodramatic double-reverses, by making the plot seem arbitrary, rob it of importance. Nor does the film, within itself, make clear what it thinks. We can think about it afterwards, and that is instructive, but “Mother Night” is like notes for a lecture that is not completed. 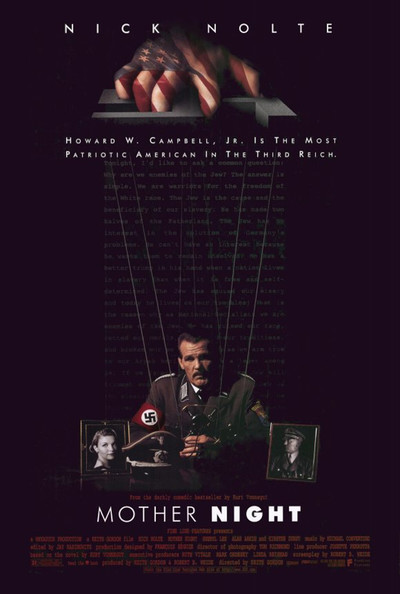