Late in Brett Morgen’s riveting “Moonage Daydream,” David Bowie speaks of his belief that people are constantly taking fragments of the life around them to create their own existence—art, politics, family, etc. This fragmentation clearly influenced Bowie’s approach in not just music but how he moved through the world, and it’s also the operating model for Morgen’s film, a movie that defies the traditional “music bio-doc” structure by valuing experience over information. Bowie’s choices as a musician and icon often defied simple explanation, and so why make a movie that tries to do put him in an impossible box? Why do the traditional thing of getting interview subjects who knew him or loved him to try and explain his importance to the 20th century? Instead, Morgen relies on image, music, and editing to produce something that doesn’t bother to explain Bowie as much as channel his energy into a new form. It’s an insanely ambitious movie. It shouldn’t work. It feels like a minor miracle that it does.

From the very beginning of his film, Morgen plays with one of the most traditionally predictable aspects of the music doc in that he’s not interested in chronology. He opens with “Hallo Spaceboy,” a killer track from 1995’s Outside that Morgen clearly finds important because it’s one of the few he returns to later in the film, but it’s over old footage of Ziggy Stardust-era Bowie and the fans who dressed like him and cried when they couldn’t touch his hand. Intercut with the fan footage are snippets of sci-fi B-movies, Bowie applying makeup, and what look like home movies of the era. It’s an incredible opening number to this cinematic concert in that it sets a tone that’s almost overwhelming. We come into music docs with relatively mundane expectations of biographical details and sound bites, but Morgen isn’t playing that game from the beginning. His skill at assembling hours of footage—just look at the excellent “Jane” for another example—comes through immediately. “Moonage Daydream” is a stunning achievement in editing, cutting across eras and settings not to the rhythm of the music as much the mood of it.

Through this process, Morgen does start to pull out some of the bio of Bowie—the influence of his older brother, an interview segment in which he speaks about love—but he’s way more interested in the art than the man (although one could argue they intertwine). This is a movie about expression, and how Bowie didn’t so much seem like he was tapping into something that was universally felt as much as he was locating something we were about to feel. Bowie wasn’t reflecting the time he was in as much as where we were going. And the minute that it felt like the world was catching up to his wavelength, he would find another one to ride. The only voices in the film are Bowie’s and those interviewing him in televised segments, and he speaks of never wanting to waste a day. In terms of process, Morgen’s film reveals how much Bowie needed to express himself. Much has made of how Bowie would reinvent himself in different eras, but Morgen’s documentary connects these different periods of his life in a way that's organic—they were all about an artist trying to create something meaningful to him every single day.

Of course, Morgen relies heavily on Bowie’s music, allowing several songs to play out in their entirety, including a few killer live versions—there’s a “Let’s Dance” late that might get your audience on their feet. However, he's not interested in a greatest hits package. Fans won’t hear all their favorite songs. This is not that movie. I’d love to pick Morgen’s brain as to how he chose which tracks to include, given the vast breadth of Bowie’s career. Or how he chose the influences that pepper the film—shots of everything from “Nosferatu” to “The Passion of Joan of Arc” to many more. He really captures Bowie as not the alien spaceman that once defined his image but almost a filter for all other pop culture. He is the ultimate expression of artistic freedom.

And, of course, expression doesn’t require explanation. Some people will likely hope for a little more grounding, and there are some segments in the last act of what is a very long movie that start to become repetitive, although one might argue that Bowie was echoing themes at that point in his career from earlier in his life, and so Morgen is doing the same, once again playing with time like in that prologue. He also moves very quickly through the last two decades or so of Bowie’s life, but that was also a time when the artist was reshaping themes he had visited before and arguably getting more deeply personal in his final works. Still, I wanted a bit more about the later Bowie, even if it's silly to argue that a 140-minute doc isn’t long enough.

Other than a bit of repetition, I honestly never felt the length of “Moonage Daydream,” a movie that wants you to get lost in it as an experience more than the “teaching tool” approach of the standard music doc. I got lost in it just as I often do in Bowie’s music. And somehow that act of getting lost—both in the music and the film about him—feels more rewarding than knowing where we’re going. Bowie speaks at one point about going into the deep water until just when your feet can’t touch the ground anymore. That’s where creativity can be found. That’s where this movie lives.

This review was filed from the Toronto International Film Festival on September 8th. It opens on September 16th, in IMAX. See it big and loud. 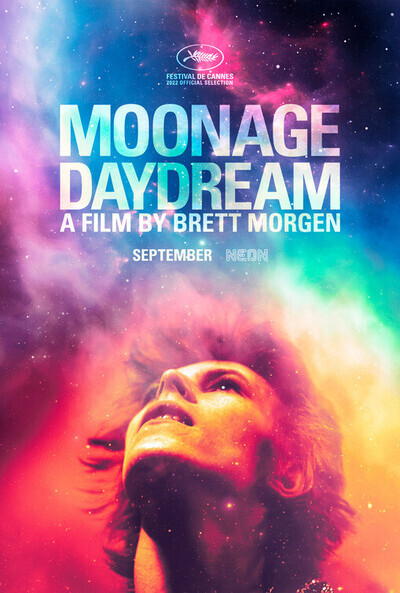 David Bowie as Self (archive footage)