There can be something absolutely liberating about a movie that makes up its rules as it goes along. "Montenegro" is a movie like that. It is about an uptight American wife who escapes from her husband's utterly sedate existence in Stockholm and spends two wild and wooly nights in a sleazy nightclub run by some expatriate Yugoslavians.

She leaves behind a staid, comfortable, affluent Swedish household, in which the only spark of life is the old grandfather's conviction that he is Buffalo Bill, and that he can find a bride by advertising in the newspaper. She finds herself in a ghetto inhabited by immigrant workers from Southern and Eastern Europe. She is surrounded by sex and violence and, truth to tell, she likes it.

"Montenegro" is the first movie in seven years from Dusan Makavejev, one of the great free spirits of moviemaking in our time. He does not see it as a protest against the exploitation of his poor countrymen who immigrate to Northern Europe in search of jobs. Quite the contrary. He believes that his life-embracing countrymen are doing the uptight Swedes a favor by condescending to live in their dull country. At one point, Makavejev says, he intended to dedicate "Montenegro" to the 11 million "guest workers" of Europe, “who moved north to exploit rich and prosperous people, bringing with them filthy habits, bad manners and the smell of garlic."

You can guess from that statement something of the spirit in which "Montenegro" was made. The movie stars Susan Anspach, the displaced housewife of "Blume in Love," as the American wife of a rich Swedish executive. The Swede is Erland Josephson, who played a similar character (from a radically different point of view) in Ingmar Bergman's "Scenes from a Marriage."

They live with a precocious son and the dotty grandfather, and occasionally consult a psychiatrist (Per Oscarsson) who is so sick he may be trying to research insanity from the inside. Their household is a mixture of sterile, efficient creature comforts and buried frustration. Their sex life is not terrific.

Anspach's husband has to make a business trip. She thinks to join him, but at the airport she's waylaid by a band of Yugoslavians, and before she quite understands what has happened, she's posed for a Polaroid with a man with a knife stuck in his forehead, and is sharing the back seat of a car with a sheep. The Yugoslavians take her to the Zanzi Bar, a disreputable nightclub, where she witnesses the transformation of a shy Yugoslavian farm girl into an exotic dancer, and finds herself powerfully attracted to the garlicky sexuality of a strong young peasant.

Seeing a Makavejev film is like experiencing a showdown with the director's libido. He has a few major themes: Large bureaucracies are stupid, ideologies are usually misunderstood by their most fervent supporters, most people are too uptight, possessions get in the way of sexuality, and an orgasm a day keeps the doctor away. In this case, the doctor (Oscarsson) and the husband hold frantic conferences about the whereabouts of the missing Anspach, while the Zanzi Bar engages in an unrestrained countdown toward New Year's Day.

Makevejev’s movies are very frank about sexuality, but they are not dirty. They have a kind of table-slapping, robust good health to them. Susan Anspach, who is not robust, and who is in fact rather shy and frail, may not seem like a likely candidate to enter this world, but she undergoes a transformation in the movie, from the suppressed, unbalanced housewife into a woman who was born to embrace Rabelaisian excess.

Maybe it's the movie's cheerful collision between the Cuisinart set and raw peasant passion that is pleasing "Montenegro's" audiences (the movie was a big hit over the weekend among the Lincoln Park crowds at the Biograph). Without knowing it, Makavejev may have stumbled on the cinematic equivalent of a visit to Greek Town. It's liberating to descend into the ethnic dives and dance to the wild zither and dodge flaming cheese and be home in front of the Sony by midnight. That's why I especially love the last scene In "Montenegro," in which Anspach returns to her affluent cocoon and takes appropriate action. 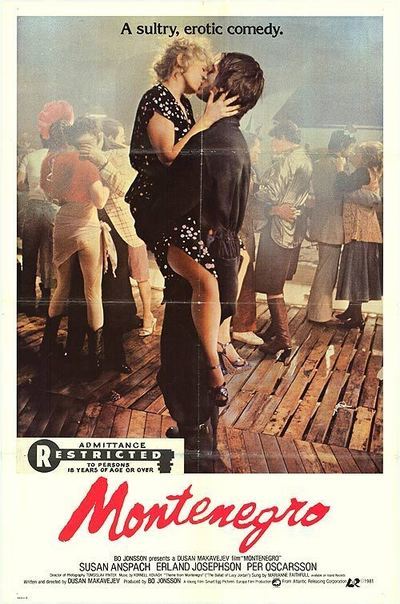 Per Oscarsson as Dr. Pazardjian