Director Ramsey Denison clearly cares a great deal about his home city of Las Vegas. His film “Money Machine” seeks to expose inept leadership that at least exacerbated the pain following the worst mass shooting in the history of the country, arguably rushed to cover up what happened with a Sin City sheen, and maybe even hid evidence that the public wasn’t told the entire story. However, intentions only go so far, and Denison’s documentary about the October 1st shooting at Mandalay Bay in 2017 is frustratingly unfocused and surprisingly thin on facts or even conclusions. After the horror that Stephen Paddock inflicted on people attending a concert outside of the casino, officials like the Governor of Nevada and Chief of Police worked to make people feel safe enough to return to the city. Doesn’t this happen after every major tragedy? People were encouraged to go to NYC shortly after 9/11. People can’t stop themselves from going outside in Summer 2020. The idea that life goes on too quickly after a national tragedy is an intriguing one, but that's not this movie. “Money Machine” is laser-focused on this specific case, and the notion that the Nevada Powers That Be wanted people to feel safe in the city that drives their economy strikes me as a particularly thin concept for a documentary.

Denison opens “Money Machine” with harrowing footage of the Route 91 concert that turned into a nightmare. With cell phone video shot as the mass shooting was underway, “Money Machine” doesn’t shy away from showing and detailing the brutality of what happened on a night when Stephen Paddock fired so many bullets from his hotel room window that killed over 50 people and injured hundreds more. Concert goers who barely escaped with their lives are interviewed (in bizarre extreme close-up) and share terrifying stories, including one who speaks about falling into a victim who had just been shot and having her finger enter his head “like a pumpkin.”

Despite the strange choice of angle in the interviews, “Money Machine” could have worked if it had focused on the people there that day, but Denison loses focus almost immediately. Even as he’s essentially recreating the shooting through footage, he’s starting to toss some conspiracy theories into the mix, including a famous one spawned by a cab driver who happened to be recording that day and seems to pick up multiple shooters. At first, the shots sound very distant, but the next round seems to come from much closer. To his credit, Denison does eventually get around to debunking most of the conspiracy theories about a second shooter, even having a forensics audio expert examine the footage for evidence of shots being fired at the same time by two or more people, but he allows them to hang in the air for most of the movie.

From the beginning of "Money Machine," Denison is all over the place in terms of subject focus. He jumps from survivors to a commentary on the structure of Vegas to a suggestion that Paddock acted out because of the way he had been treated. Once a high roller, Paddock had suffered serious losses recently, and his brother suggests that the casinos that once treated him like a King had tossed him aside. The implication is that Paddock killed dozens of people to get back at Vegas, knowing the horror of that night would impact the bottom line of the casinos that had betrayed him.

“Money Machine” points out how much that didn’t happen but it does so with an angry, one-sided slam piece that accuses the Governor of turning the event into a political opportunity and the Sheriff into just wishing it would go away. Over a shot of Joe Lombardo crying and the Governor placing a caring hand on his shoulder, Denison adopts a “how dare they” tone and “Money Machine” loses any remaining focus it had. Yes, the casinos and power structure could have acted more empathetically and been more transparent about mistakes that were made that night. But none of this is weighty enough for a documentary. It feels like Denison went digging for evidence of evil and unchecked corruption, but he didn’t come up with enough, and so the lack of depth forced him into a scattershot approach, hoping something would stick. It’s like listening to someone at a bar who’s had a few too many and can’t maintain a train of thought to reach a conclusion. And that bar is definitely in Vegas. 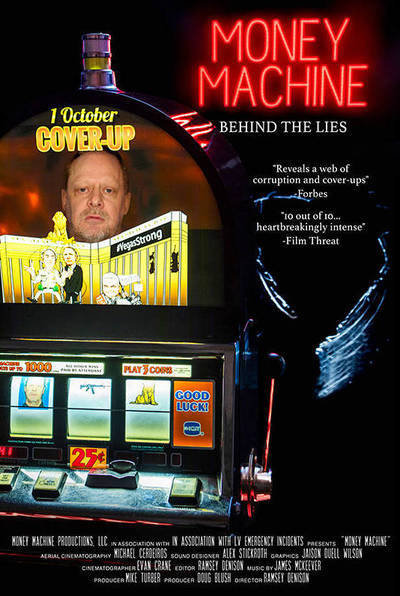