Depressingly regressive and borderline dangerous, "Moms’ Night Out" peddles archaic notions of gender roles in the name of wacky laughs. But it also wants to be "About Something." It wants to inspire as well as entertain. It’s "The Hangover" aimed at Christian audiences, and if that sounds like an impossible prospect, well, that’s because it is.

"Moms’ Night Out" is just as afraid to let loose as its characters are. Then again, the people who populate this picture are more like clichéd, cardboard types: the frazzled, stay-at-home mom; the well-meaning, absent dad; the flighty best friend; the snooty restaurant hostess. Why must faith-based offerings be so lame and—worst of all—so out of touch with reality?

Basically, the moral of the story is: Don’t go out. Because if you do, all hell will break loose—or rather, all heck.

That’s the lesson Allyson (Sarah Drew of “Grey’s Anatomy”) learns the hard (and unfunny) way. A married, suburban mother of three whose husband (Sean Astin) is usually away on business trips, Allyson struggles to find the time and inspiration to be a mommy blogger, but she’s usually chasing after her kids, cleaning up their messes or prying their heads out of toilets when they get stuck. (Don’t ask—it’s a running bit.) She also happens to be a control freak who’s obsessive about cleanliness, which is a difficult thing to be when you’re a parent. The perky Drew would probably be much more likable with better material.

Directors Andrew and Jon Erwin, working from a script by Jon Erwin and Andrea Gyertson Nasfell, often depict the chaos of Allyson’s daily life in sitcom-y fashion with words that pop up on screen, cutesy little graphics and lots of manic, overly explanatory narration. We get it, she’s stressed out. And at first, “Moms’ Night Out” reveals a recognizable nugget of truth: that women are hard on themselves and have unrealistic expectations about being all things to all people at all times. (Note to self.) Then it takes that nugget, wraps it up and smothers it in shrill, zany packaging.

In desperate need of some “me” time, Allyson dares to arrange a night out with two equally overwhelmed mothers: her childhood best friend, the dizzy Izzy (Andrea Logan White), and the proper preacher’s wife, Sondra (Patricia Heaton, who’s also a producer on the film). I say “dares” because going out means leaving the children in the care of their husbands, who are totally incompetent. Allyson’s husband would rather play video games, and Izzy’s husband (Robert Amaya) is actively afraid of their twins.

And he doesn’t even know yet that she has another baby on the way. Izzy takes a pregnancy test on the way out the door for this much-anticipated, much-needed girls’ night (as one would) and is shocked to learn that it’s positive. My first thought was: “Oh, she’s panicking because it’s going to be obvious she’s expecting when she doesn’t order a drink at dinner.” But we don’t even get that far. We barely get past sodas at the bowling alley. It’s possible to be a good Christian and still have a glass of wine from time to time, yes?

Anyway, the three women do indeed find themselves in trouble—not because they’ve done anything wrong, but because they keep trying to do something right. Allyson’s sister-in-law, Bridget (Abbie Cobb), has left her own baby with his father for the night to take a part-time job. Or so she thinks. Tracking down the infant’s whereabouts sends the ladies on a frenzied tour of their unnamed town (the film was shot in Birmingham, Alabama). This includes a stop to a tattoo parlor (which, in their sheltered minds, is the most dangerous place on Earth), a police chase involving a cab and a minivan, a run-in with a biker gang and, eventually, jail.

None of this is as exciting as it sounds. The antics are all dismally tame.

For the most part, though, “Moms’ Night Out” surprisingly isn't too preachy. The church is a natural part of these women’s lives—how they know each other, where their kids socialize, what they talk about in casual conversation. The potentially disastrous events depicted in “Moms’ Night Out” don’t represent a crisis of faith so much as a reminder of its purpose.

The closest we get to a sermon comes from an unlikely source: country star Trace Adkins as a biker with a heart of gold named Bones. With his hulking frame and gravelly voice, he’s actually the best part of the movie, oddly enough. But the ultimate message here is unmistakable, regardless of your religious beliefs: A woman’s place is in the home, not out on the town. 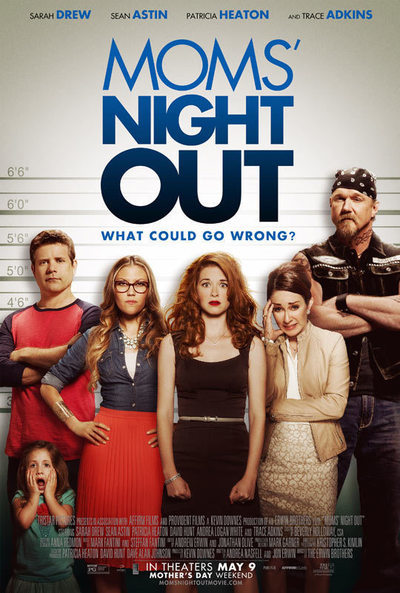 Rated PG for mild thematic elements and some action