It's hard to tell if Kevin Pollak's documentary "Misery Loves Comedy" is too much of a good thing or not enough.

In the abstract, it would seem to have everything it needs to be a totally satisfying nonfiction feature about the history and craft of standup comedy and the personality types that tend to be drawn to it. And it couldn't ask for a more outwardly suitable director. Pollak is a brilliant standup comic himself, and a killer impressionist, and a fine actor who's spent lots of time on film sets absorbing the craft of movie storytelling.

He's also very much an insider in the tightly knit world of standup, somebody who's probably logged thousands of hours standing in spotlights in front of brick walls, which means there's no working comedian of any age with a brain in his or her head who wouldn't be willing to follow him as he leads them into more personal terrain than they're maybe used to visiting in interviews. Judging solely from the lineup of talking heads assembled here—a murderer's row that includes Larry David, Whoopi Goldberg, Amy Schumer, Jimmy Fallon, Martin Short, Christopher Guest, Janeane Garofalo, Kumail Nanjiani, Jason Alexander and forty other boldfaced names—he's a man who commands an extraordinary degree of trust, and this is confirmed when you hear the subjects open up to his skillful questions.

Freddie Prinze, Jr., for one, talks about how he was more or less ordered into standup comedy by his grandfather after his troubled dad, star of TV's "Chico and the Man," committed suicide, in order to "fix what your father fucked up." Nearly every other comedian who's included in the "origins" portion of the documentary shares some version of a tragic, or at least uncomfortable, backstory, as well as a feeling of emptiness that could only be filled by hearing the laughter of strangers. Comedy as catharsis and a means of public sharing also gets a segment; the emotional peak is Maria Bamford talking about the first time she used her stint in a mental hospital as fuel for a routine, and heard audience members shouting out their own traumas in response. We also hear secondhand stories about Lenny Bruce, Richard Pryor, George Carlin, Sam Kinison and other standup legends whose demons fueled their art and set fire to the personal lives.

The problem, unfortunately, is that Pollak's film isn't content to zero in on the assertion promised by the title: "Misery Loves Comedy." That phrase clearly holds true for the people interviewed here: to some degree, they're all people whose unhappiness drove them to make people laugh, then perhaps try to steer that laughter towards shared introspection. ("What kind of clown are you?" somebody asks Bill Murray's Bozo-garbed bank robber in "Quick Change," to which he replies, "The crying on the inside kind, I guess.") But that's not the focus. In fact it's often difficult to say what the film's focus actually is; a more accurate title might've been "Bits and Pieces of Interviews with 50 Comedians," but that wouldn't fit on most marquees.

While genial and never dull, the film is all over the place, a classic example of trying to do and say too much. There are dozens of biographical nuggets, including anecdotes about being the class clown, and lots of discussion of the practical aspects of standup, including how it feels when a line bombs, how it makes the comic feel, and the various ways they've reacted to failure; these are edited together (by Robert Legato) skillfully, sometimes brilliantly, as when several subjects seem to be telling variations of the same story and the movie cuts between them so that they all seem to be collectively participating in the construction of one very long sentence. This sort of cleverness unfortunately doesn't counteract the nagging feeling that "Misery Loves Comedy" is trying to turn a liability (too many subjects, too many stories, too much repetition) into a creative asset, when the wiser, though admittedly much harder move might've been to cut twenty or thirty or forty of the interviewees out of the film, the better to focus on the most complex, fascinating and charismatic subjects, and let their stories breathe, and in the process, allow a goodhearted but scattered film to find something like a calm center. 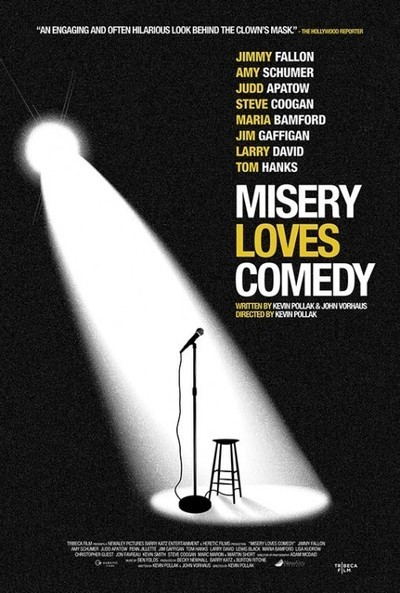